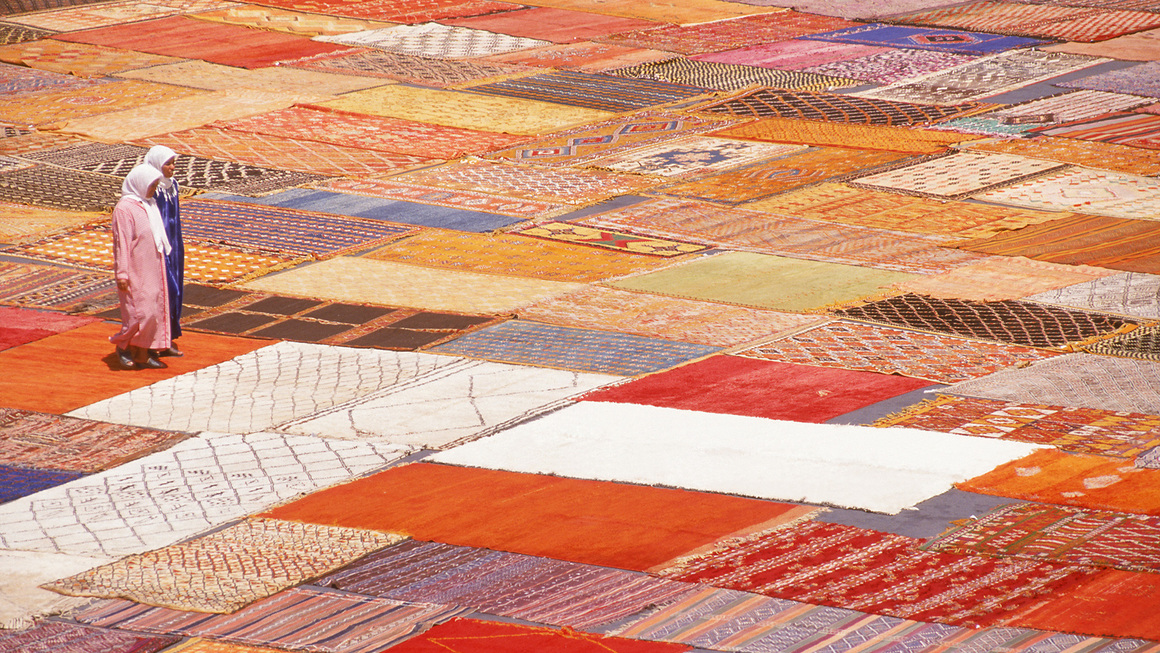 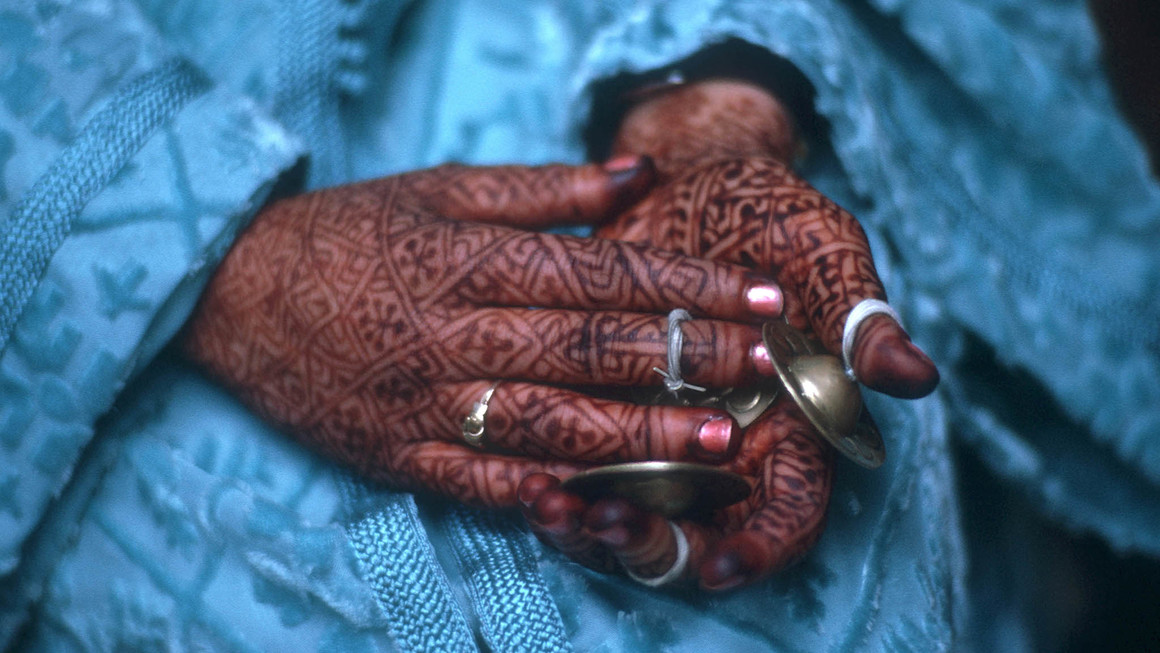 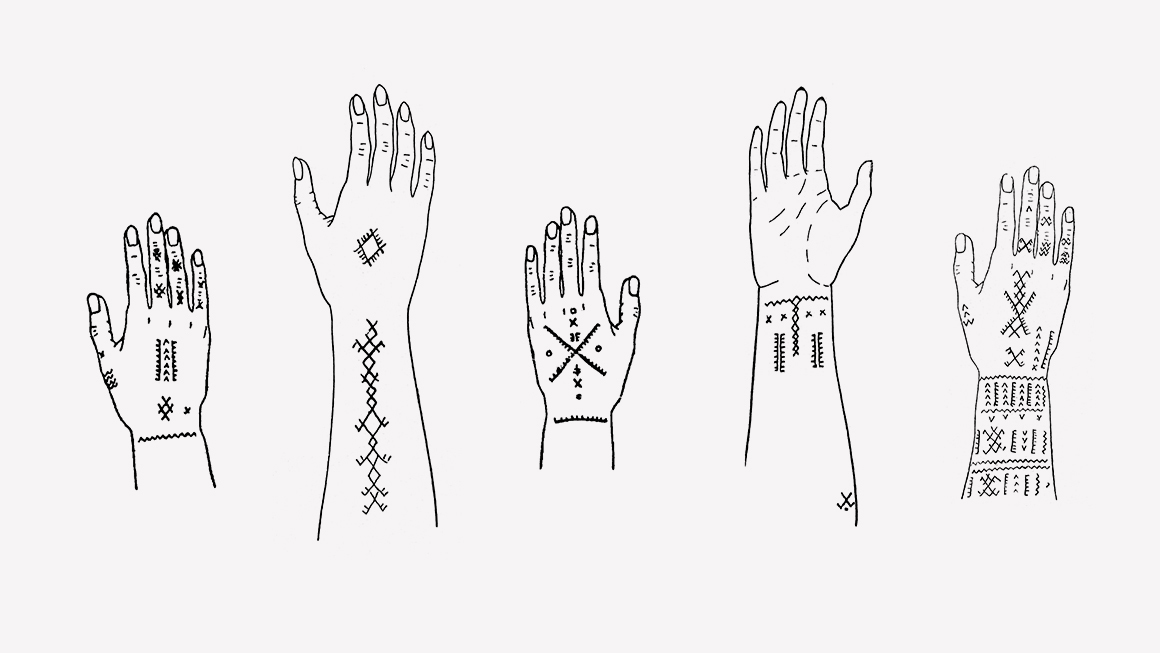 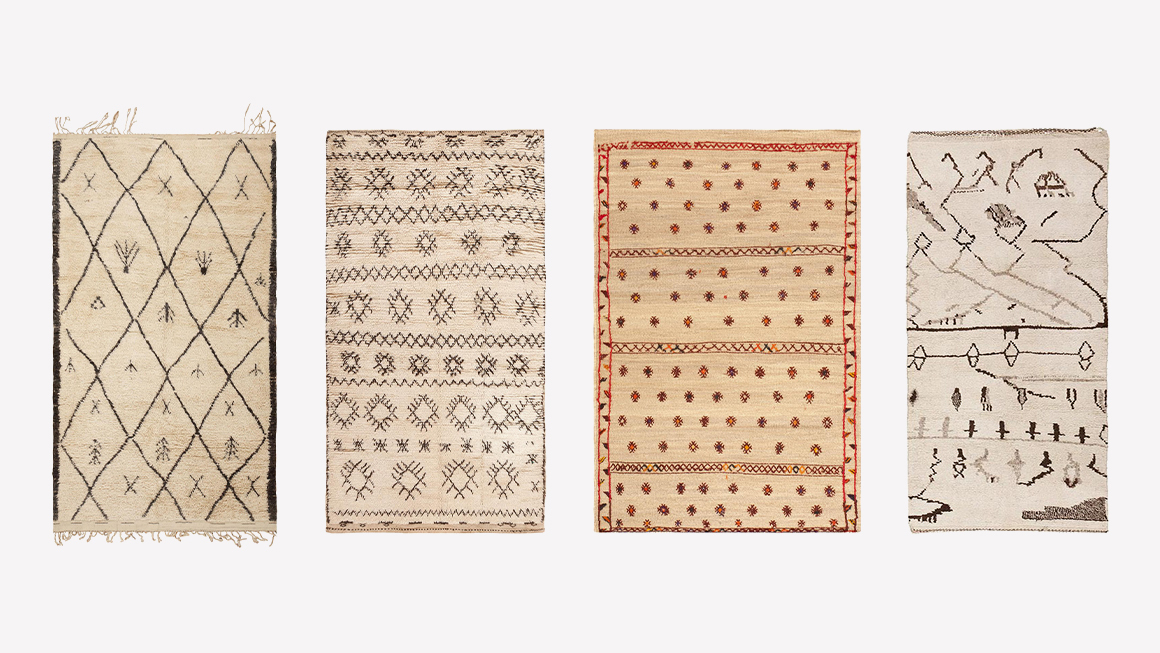 In Arabic, an object or entity infused with the presence of God is described as having baraka. In a culture where misfortune is habitually blamed on the evil eye, it is considered prudent to surround oneself with as many such positively charged things as possible. One plant long thought of as being endowed with baraka is henna. Traditionally associated with women, henna usage is closely linked to the culture of hamam, the bathhouses where women gather to enjoy food, music, perfume, and one another’s company.

In an ancient precursor to modern Western cosmetics, a fragrant paste made by crushing henna’s bright green leaves is applied to hair, nails, and skin, dyeing them a rich orange-brown. The discovery that this paste also delivers a cooling sensation led to the practice of painting dot patterns on the palms as a way to combat heat. Henna is believed to have healing properties, and has been used to treat ailments ranging from dandruff to arthritis and leprosy. Intricate patterns are carefully drawn with a small stick or cone, followed by hours of patient stillness while the dye seeps into the skin. Used especially during transitional stages in life, henna is most often applied ritualistically to areas not protected by clothing, such as the hands, feet, and face.

There is a connection between henna and carpets, a link that can especially be found in rugs produced by rural tribal communities in the Atlas Mountains spanning Morocco, Algeria, and Tunisia. Historically these carpets were produced by women for use by their own families as mattresses or blankets. It is believed that a carpet can be infused with baraka not only through the patterns woven into it, but also through the loving intention with which each of its rows of wool is woven. The laborious production process is a female bonding ritual, but collaborators must be chosen wisely, since any personal conflict exhibited in the presence of the loom is believed to strip the textile of its blessings.

Both henna and carpet designs from this region typically feature geometric elements such as chevrons, crosses, dots, squares, straight and zigzag lines, and triangles, all of which are used to convey messages. For example, diamond- or star-shaped “lozenge” motifs represent an eye that deflects evil, while a shape with five points or branches conjures the protection of the talismanic khamsa, or hand of Fatima. While each indigenous group has developed a unique aesthetic, the parallel between the two decorative traditions is exemplified in the Azilal and Beni Ourain rugs of Morocco—especially the large pile carpets typically knotted with undyed wool and black linear designs that characterize the work of  the seventeen individual tribes of Beni Ourain. It has been suggested that the rectilinear motifs that famously appear in Berber carpets and henna, as well as tattoo markings (another tradition of North African adornment specific to the female realm) originate in the ancient Tifinagh alphabet. But with the linguistic meaning lost, these abstract patterns gradually came to be thought of as offering layers of symbolic protection against evil.

Karen Azoulay is a Canadian visual artist based in Brooklyn.

From the Collection of Federico de Vera: Head of the Virgin
x