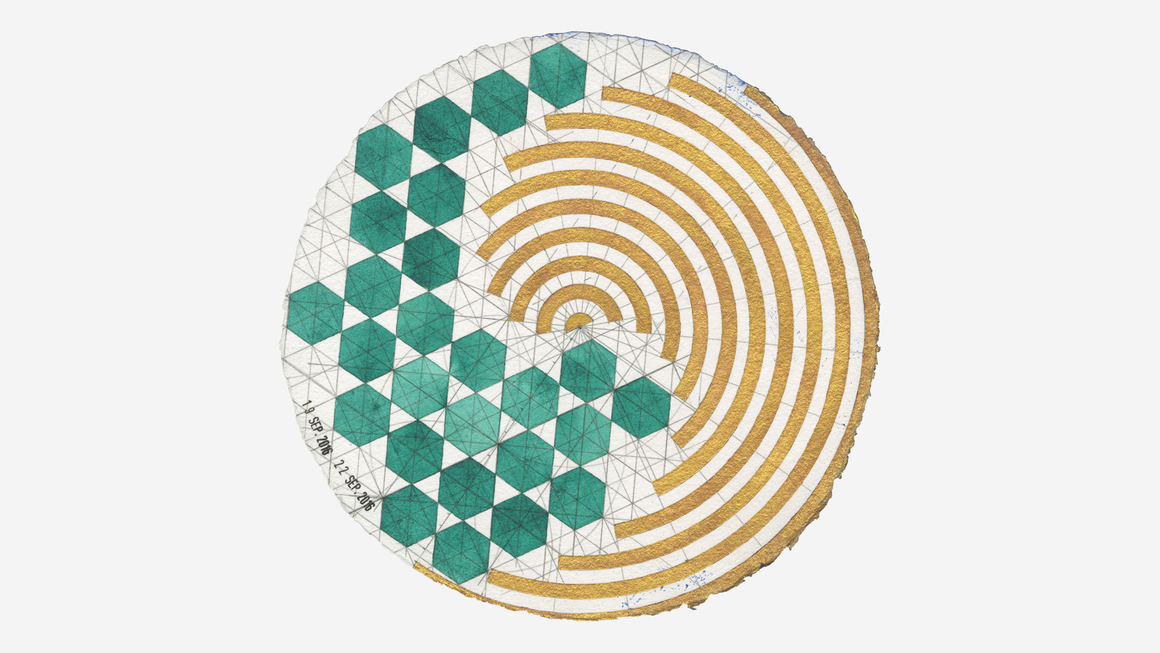 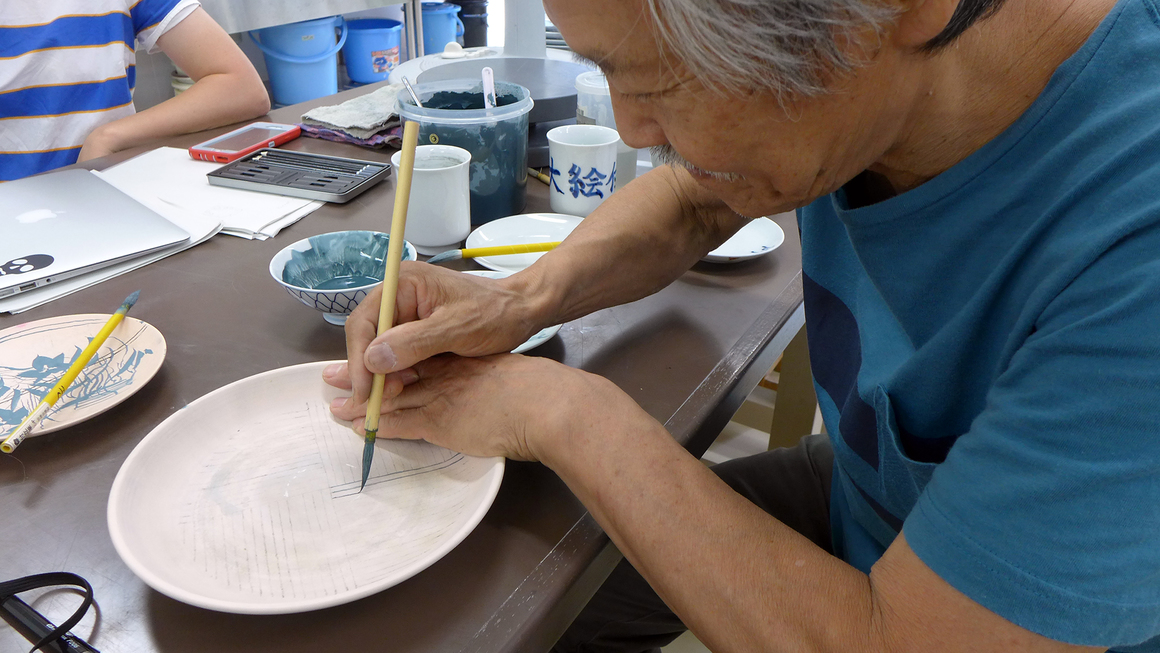 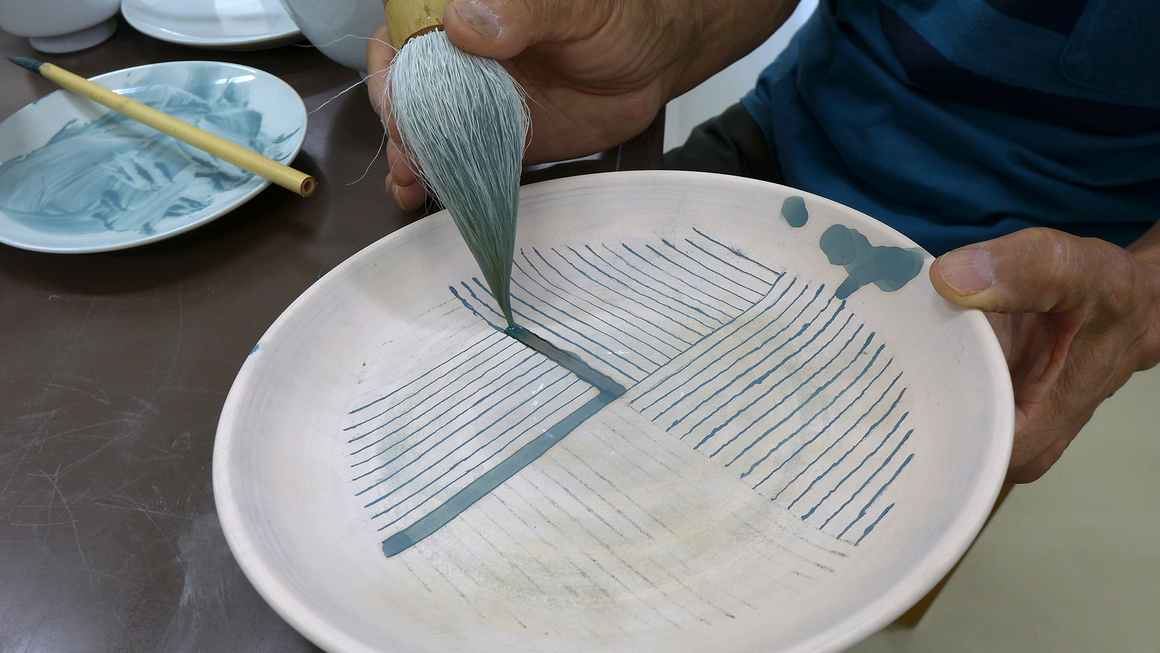 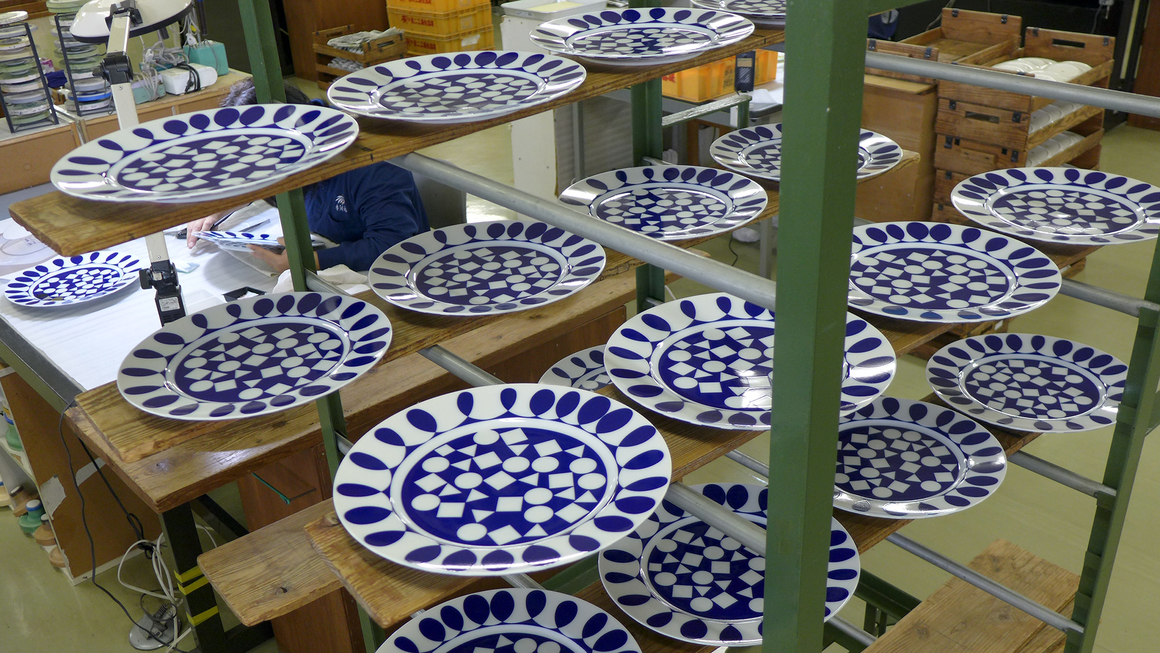 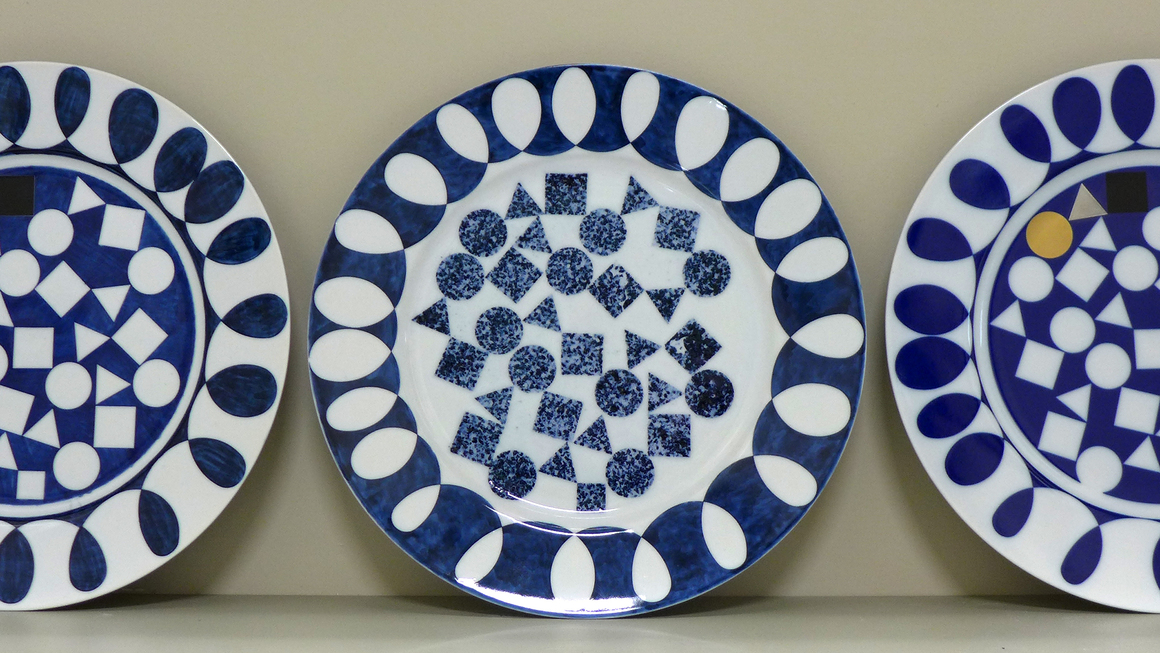 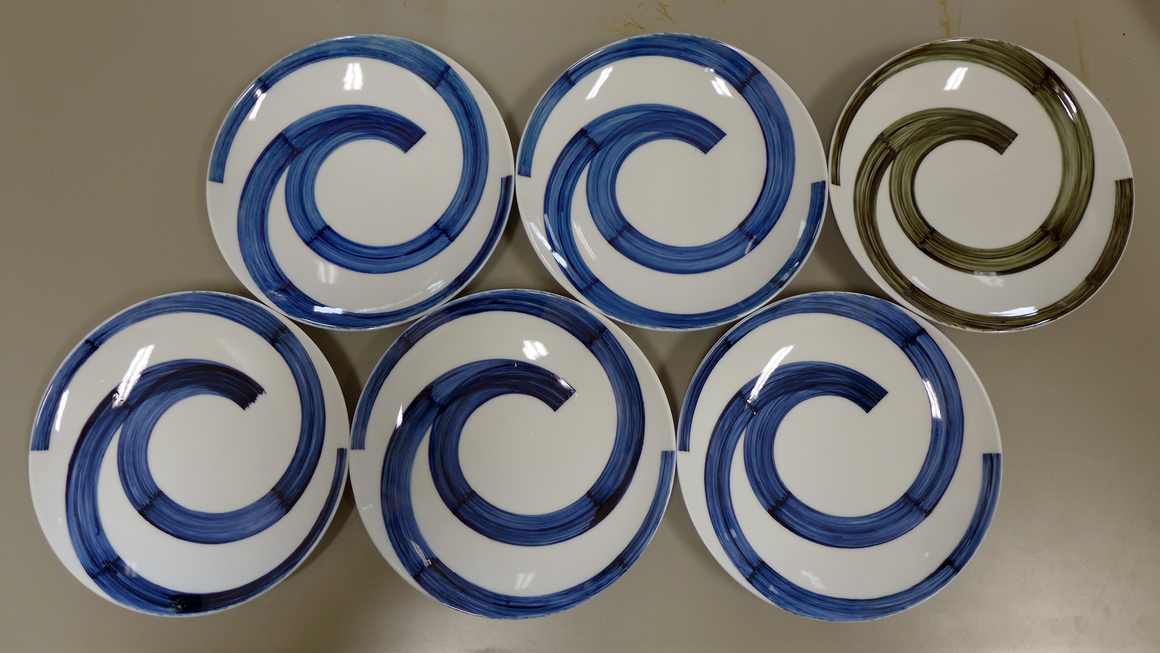 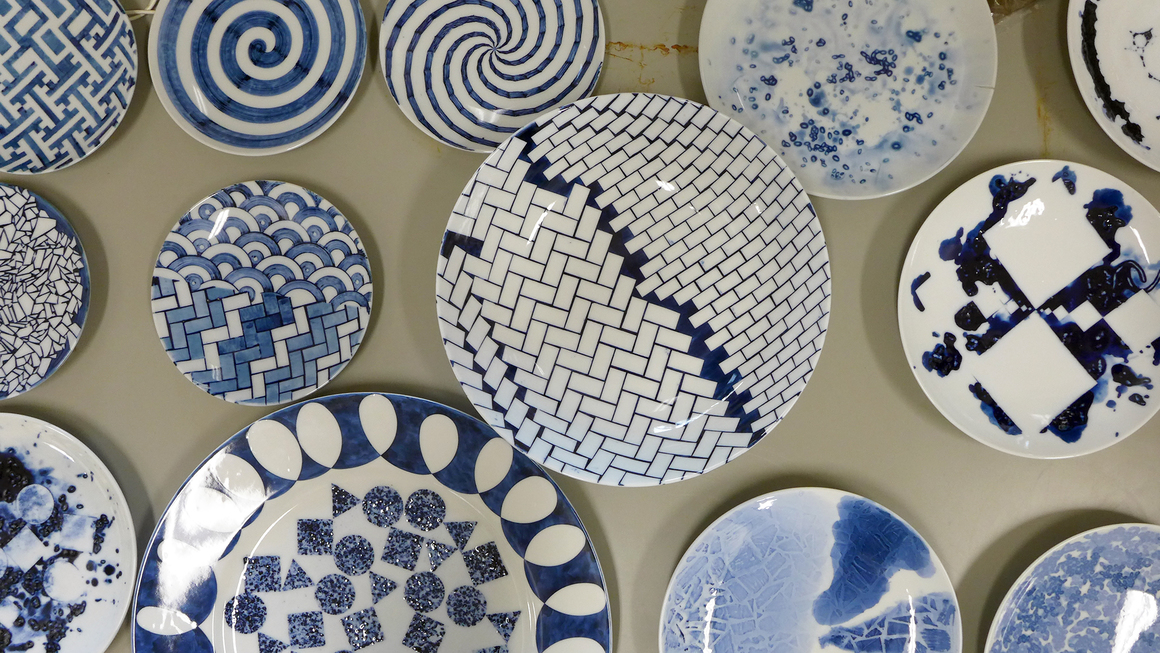 Arita Iwa: No Room for Squares

I land at Tokyo International Airport. Traveling from Tokyo to Arita—almost 685 miles—is quick. In five hours, the Shinkansen bullet train brings you to Fukuoka. In another hour and a half, the Midori express brings you to Arita via Saga through landscape that shifts from plains to dense, capricious mountains. The train shakes on the single-track route passing many tunnels. A train wheel is an iron circle. An airplane engine is a rotating impeller in a circular sleeve. Sengai Gibon, a Zen Buddhist monk, drew a perfect circle with a calligraphy brush. The sun, the eye, and the horizon can be represented by circles. Drawing on circular porcelain plates was the reason to go to Arita.

Here in this habitat of potters, painters, stackers, and packers, I am going to study porcelain decoration techniques on circular plates and dishes. The teacher, Shozaburo-san, a master in drawing flowers and bamboo, teaches cobalt underglaze techniques on biscuit ware. A drawing curriculum of straight lines, curved lines, a pattern representing the sea, the chrysanthemum, and the three friends of winter—pine, plum, and bamboo—ensures that centuries-old images survive. Tradition is the norm in Arita College of Ceramics. After a week trying to draw straight lines, a stylized pattern of the sea, leaves, and flowers, it is clear you can’t become a porcelain decoration master in three months’ time. To draw these traditional subjects with the hand of a master, the hand, body, and mind have to be trained for a lifetime. Hence I start with my usual tools: a ruler, compasses, tape, and templates.

The shift from the usual rectangular drawing paper to a circular surface of porcelain clay is a small yet revolutionary change for an artist. While the rectangle originated as an open, architectural shape, the circle is more anthropomorphic and closed. The circle has neither top nor bottom; it is a turning wheel, a running clock, a sun and moon projection, a diaphragm, a spiral, a vortex. The drawings from the first month of my residency in Arita fit the shape of a circle, accentuate the circle, and turn within it. By drawing on both sides of biscuit ware, the rear reflects or comments on the front. Both convex and concave, a circular plate is a container for food decorated to amuse the eye, to reflect life and the body that needs to be fed, the landscape that provides the nutrients, time, and death.

Cycling in the morning through various weather conditions to my studio, I gathered details from the landscape: the craggy geology, Mount Kurokami, the brick pattern you see everywhere, and a single kaolin rock from Arita’s Izumiyama Quarry. An artistic digestion occurred from mixing, pairing, fragmenting these many visual components and produced unforeseen outcomes as a result of drawing five days a week on porcelain.

A noodle or ramen bowl is hardly ever decorated with noodles or ramen or a fish, a slice of meat, or vegetable. It made me reflect on what you would like to see and what makes sense to see when your bowl, cup, or dish is empty after you have nourished yourself. Some experiments followed with cutting tomatoes, peppers, onions, and mushrooms in half and dipping them into cobalt blue underglaze to stamp on biscuit ware, but the results were boring. Depicting rice on a dish—that was a challenge. Rice is everywhere in Japan; in Arita it grows on every corner and piece of land. Rice is holy—a crucial ingredient to Shinto religion as well as sushi and sake. I did some experiments with rice soaked in underglaze on dry or wet biscuit ware, which gives a beautiful result—as if looking into a small universe of drifting grains, or floating bacteria through a circular lens of a microscope. I had good results with green tea leaves too.

Tableware is decorated to distract, to entertain, to incite wonder, and to have something to talk about during dinner. In Europe, it is quite rare that tableware is decorated; modernism wiped out decoration from houses, furniture, and tableware. A no-nonsense Protestant sentiment did away with embellishing daily life. In Japan it is the opposite—decoration is part of the tradition and can be seen in undulating roof tiles, in kimonos, ukiyo-e prints, manga books, Buddhist temples, Shinto shrines, sliding doors, folding screens, and tableware. In Arita, porcelain is storytelling, frozen stories narrating the sea, the land, the weather, the people, its language a drawn one of patterns and calligraphy. A porcelain vase or porcelain plate made in Arita is a book.

With porcelain dynasties four centuries old, Arita’s own stories are difficult to discover as its inhabitants are cautious and introverted. After living there for three months, it became evident that thick, Pynchon-like novels could be written about the clans of potters, the city, and the history of Arita ware over fifteen generations—the rise and fall and bloom and decline. For example, the splitting of the Fukagawa family in 1870 into two potteries of great fame: Fukagawa Seiji and Koransha Co. Ltd. And fifteenth-generation artisan Sakaida Kakiemon, soon to be a living national treasure, or the specialized pottery of the mayor of Arita or the Kyushu Ceramic Museum director with his secret collection or the Momota Tuen trading house, which began in Korea, the force field between potters and traders. Four hundred years of successes, struggles, competition, and innovation are readable on porcelain plates, bowls, and vases. In general, it is the story of mankind struggling with fear and desire, dealing with full and empty, longing for reason and beauty.

A residency of three months is a pressure cooker from the moment a vague idea falls into fertile soil. At that moment, you try to force the cold and calm materiality of porcelain under the pressure of time into forms it won’t, can’t, and doesn’t want to take. A seven-day workweek is too short a time to elevate that grain fallen on fertile soil into a bonsai tree, a bamboo forest or a fruitful kaki tree. We go home, leaving the common ground of Arita in Saga Prefecture on the island of Kyushu. My colleague, a designer, takes home three slip-cast molds and a chemical recipe for dripping and solidifying porcelain to continue his research in his studio in Holland. I go home amputated, radically cut off from porcelain decoration and the moment of attack by the ceramic virus. Without a kiln, wheel, and a lump of clay, you’re not a potter. What remains is cold turkey from an underglaze blue drawing-on-porcelain addiction.

Henri Jacobs is an artist based in Brussels and the creator of Journal Drawings.  In 2016, Jacobs completed a residency in Arita, Kyushu, Japan. He would like to acknowledge the Arita College of Ceramics, Saga Ceramics Research Laboratory, Saga Prefecture, and the generous support of the Mondriaan Fund Amsterdam. 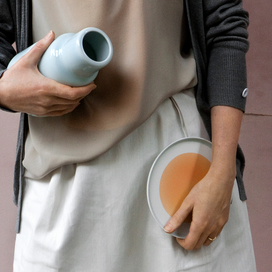 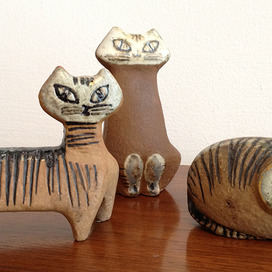 Now There Are Three 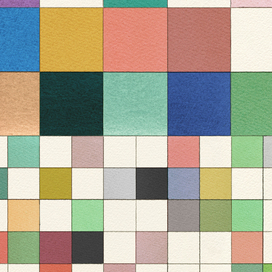