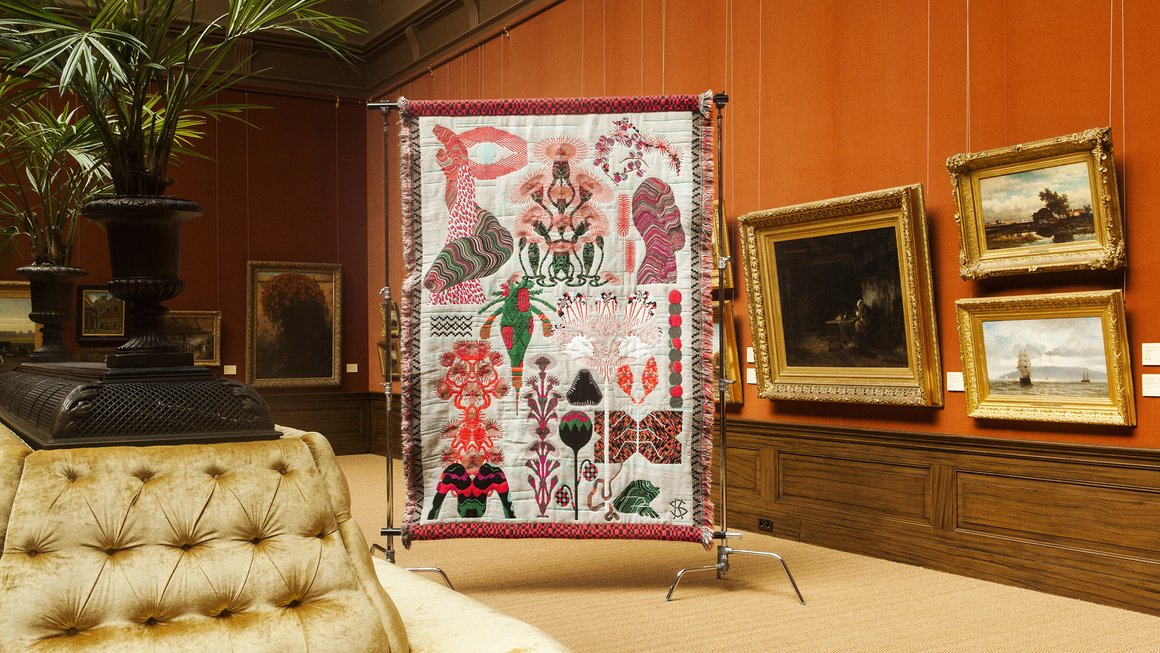 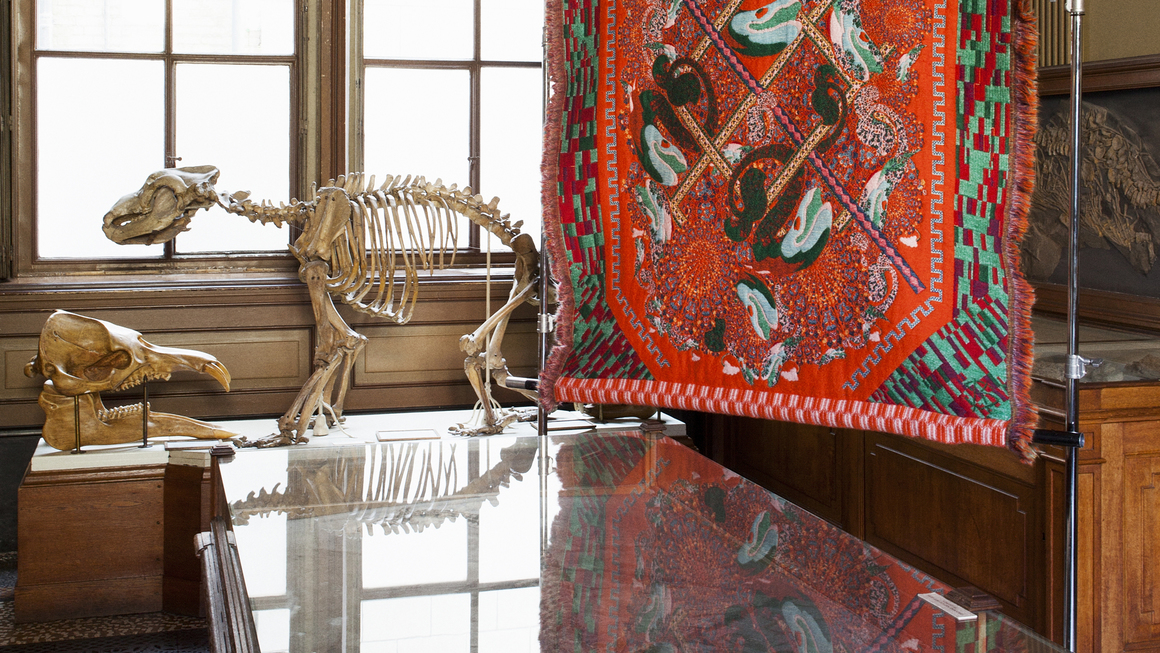 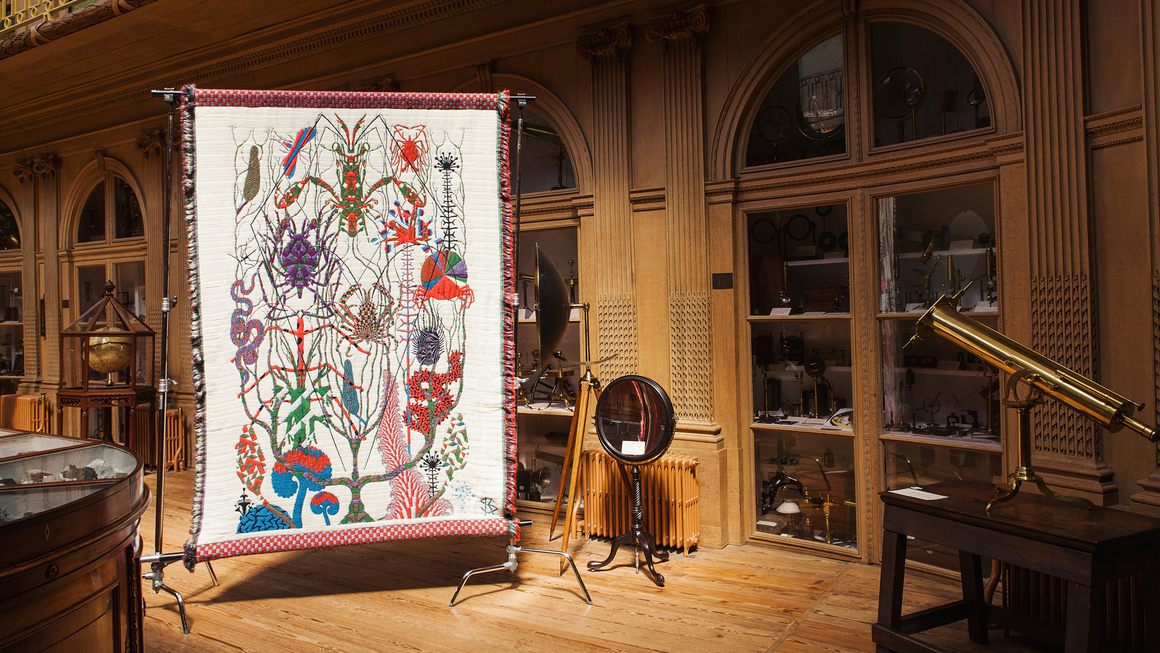 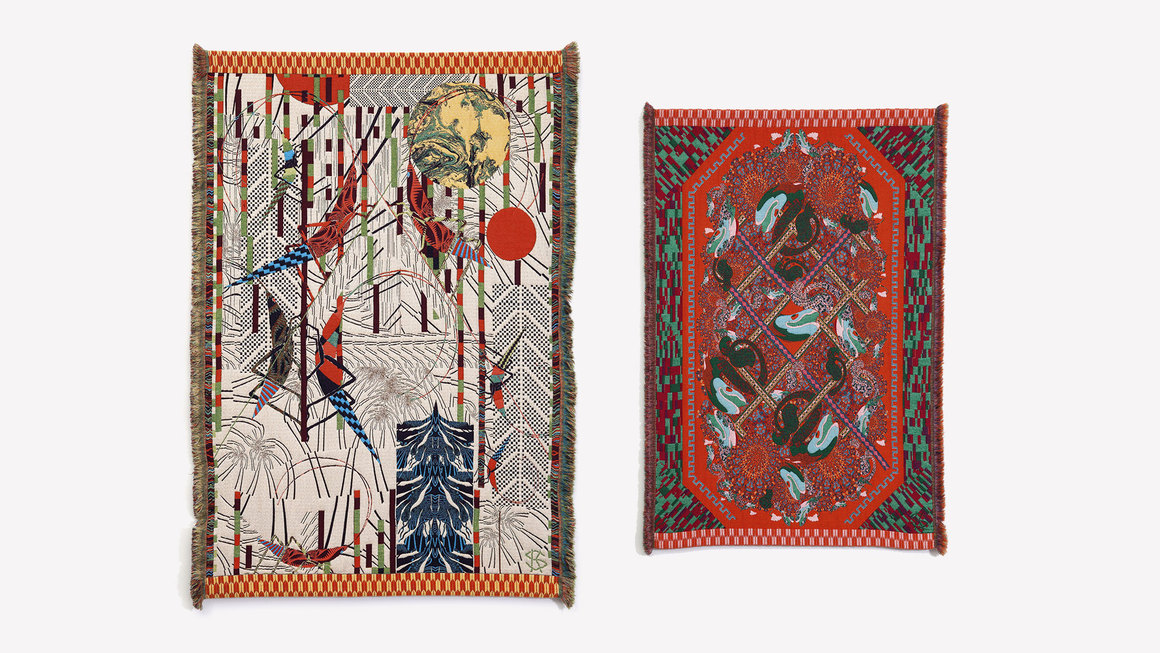 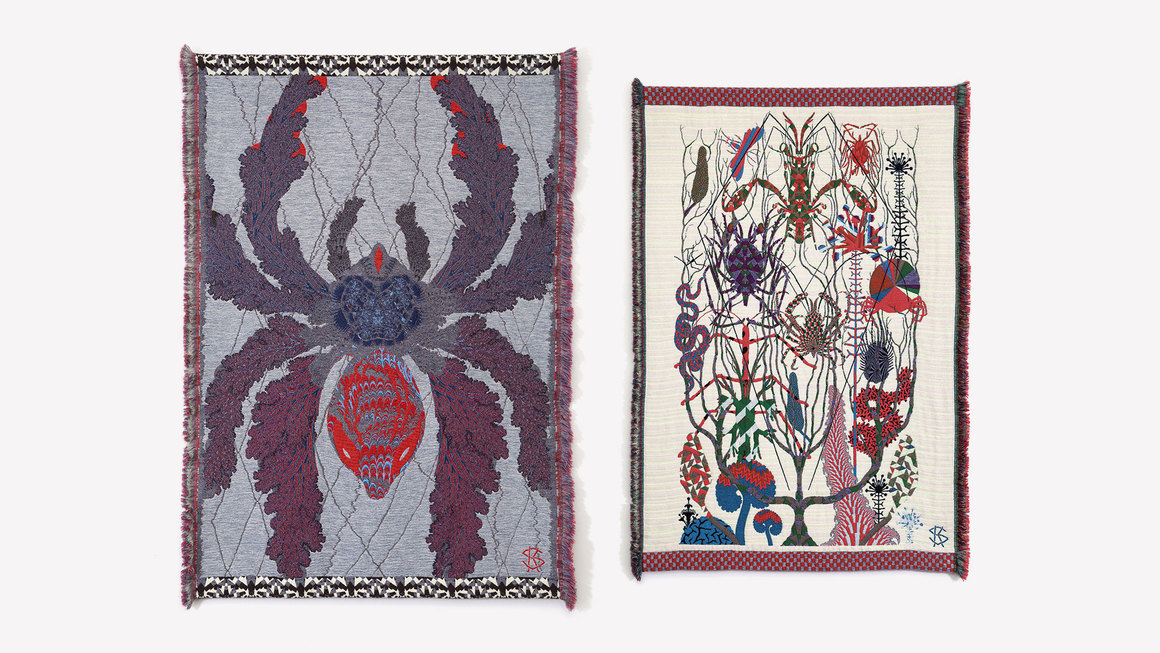 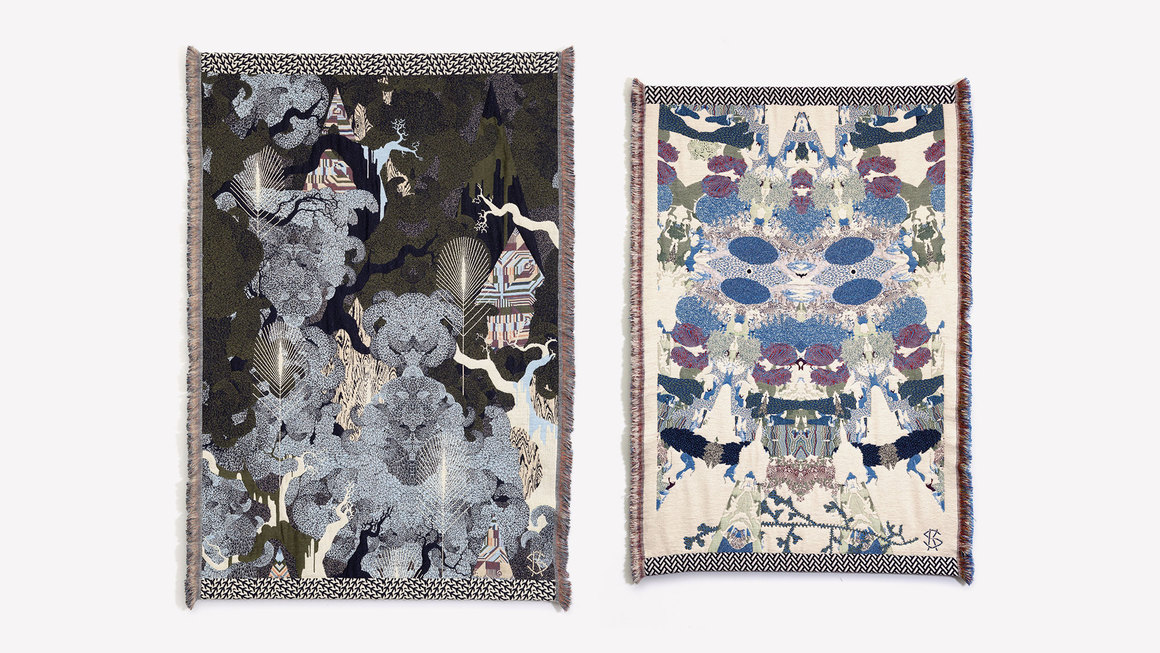 The complex and detailed tapestries of artist and designer Kustaa Saksi (b. Finland, 1973) envelop the viewer in a mesmerizing world of shape, pattern, and color. Although his work is unmistakably of our time, it is also rooted in a rich tradition of natural historic images. The first time I encountered Saksi’s work was in 2014 at his exhibition Hypnopompic at the TextielMuseum in Tilburg, the Netherlands. It made a strong impression on me; aggressive apes danced along the lianas of rampant graphic jungles; a terrifyingly giant built tarantula formed vibrating lines; creatures crawled throughout—but at the same time an undeniable sense of organization and hierachy reigned across each pattern.

During the show, Maria Sibylla Merian (b. Germany, 1647–1717) came to mind—one of the first female biological researchers and illustrators who lived and worked in Amsterdam. Her refined brushstroke technique elevated her to the status of an artistic pioneer; with detailed precision, she documented the awe-inspiring transformation of caterpillars into pupae and then into butterflies or moths. Because of her artistic sensitivity for composition and ornament, she succeeded in rendering this transformation into dramatic narratives, offering a new approach to drawing wholly unique at the time.

The budding development of technology focusing on the microscopic presented a range of opportunities for artists beyond Merian as well. German zoologist and philosopher Ernst Haeckel (b. Germany, 1834–1919) succeeded in depicting the most minute of life forms, many of which were described and drawn for the first time by him. The powerful plates of Kunstformen der Natur (Art Forms of Nature, published in parts around 1900) emphasize the symmetry and patterns inherent to these organisms. Haeckel’s drawings and paintings—which are inherently inclined toward abstraction—also became a source of inspiration for the artists of France’s art nouveau movement. Architect H.P. Berlage (1856–1934) of the Amsterdam school (1910–30) was also inspired by their visionary detail.

Roughly a hundred years later, after a succesful career as an illustrator that involved the translation of a number of his designs into textiles by Marimekko, Kustaa Saksi felt the need to shift directions. From his new base in Tilburg at the TextielLab—a lab that offers specialized knowledge and high-grade equipment to artists and designers—he began experimenting with physical material. In close collaboration with a product developer and yarn expert, Saksi experiments with a mix of natural and synthetic threads. The best combinations are found by trial and error: painting with textile on the loom. Between the rich textures of the front and backside of Jaquard fabric, a “humus” layer of loose threads comes into being: from the roots of drawing evolve a tangible work of art.

Differing from Merian and Haeckel in his approach, Kustaa Saksi doesn’t focus on aligning every detail of his work with its organic counterpart. Rather, he dedicates his time to playing a graphic game in which familiar yet figurative motifs are interwoven with abstract patterns, lines, and surfaces; the shapes of animals, insects, and plants are combined throughout his images to offer personal associations and expressions, for example. Yet this process does not alienate Saksi from a horror vacui—the Latin term for fear of empty space—it instead allows him to embrace it. Every edge and corner of his work is used. The richness of this space allows the eye to forever wander, explore. A frequent migraine sufferer, Saksi is also deeply interested in neurological and optical phenomena, which afflict him during each episode but ironically also impress him to such a degree that he incorporates a range of psychedelic imagery into his designs. In First Symptoms (2019), his most recent series of tapestries based on such experiences, abstraction seems to prevail even stronger than before.

First Symptoms, a cycle of six new woven tapestries by Kustaa Saksi is now on view at Spazio Nobile Gallery in Brussels, Belgium through September 8.

Harmen Liemburg is an Arnhem-based graphic designer, printmaker, and journalist.