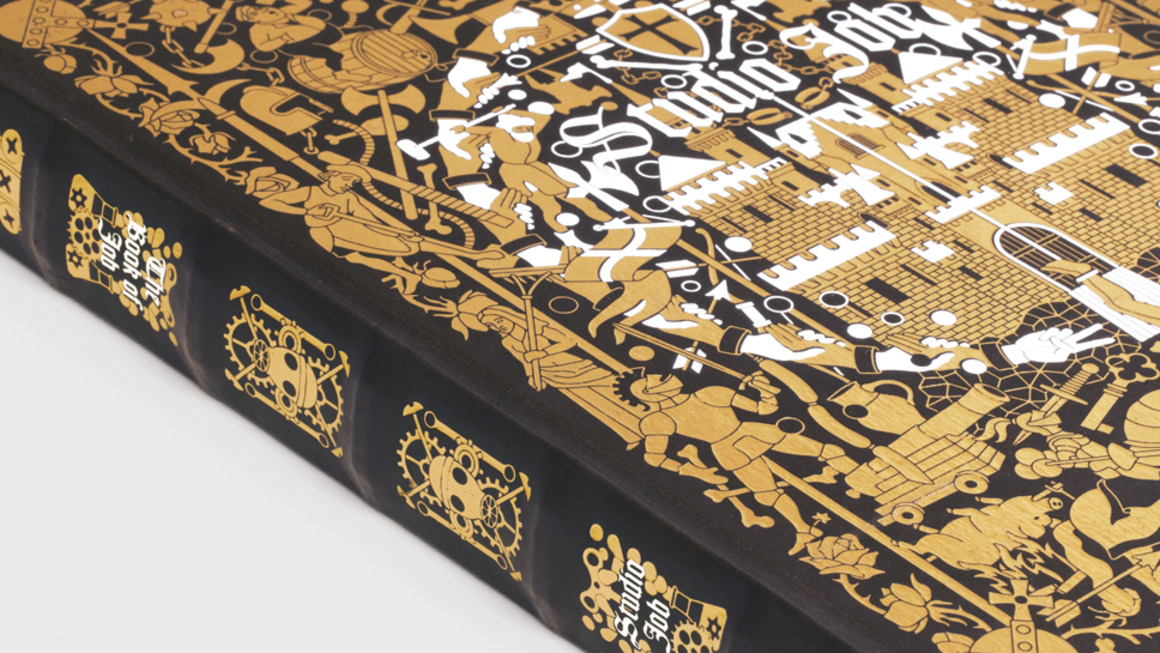 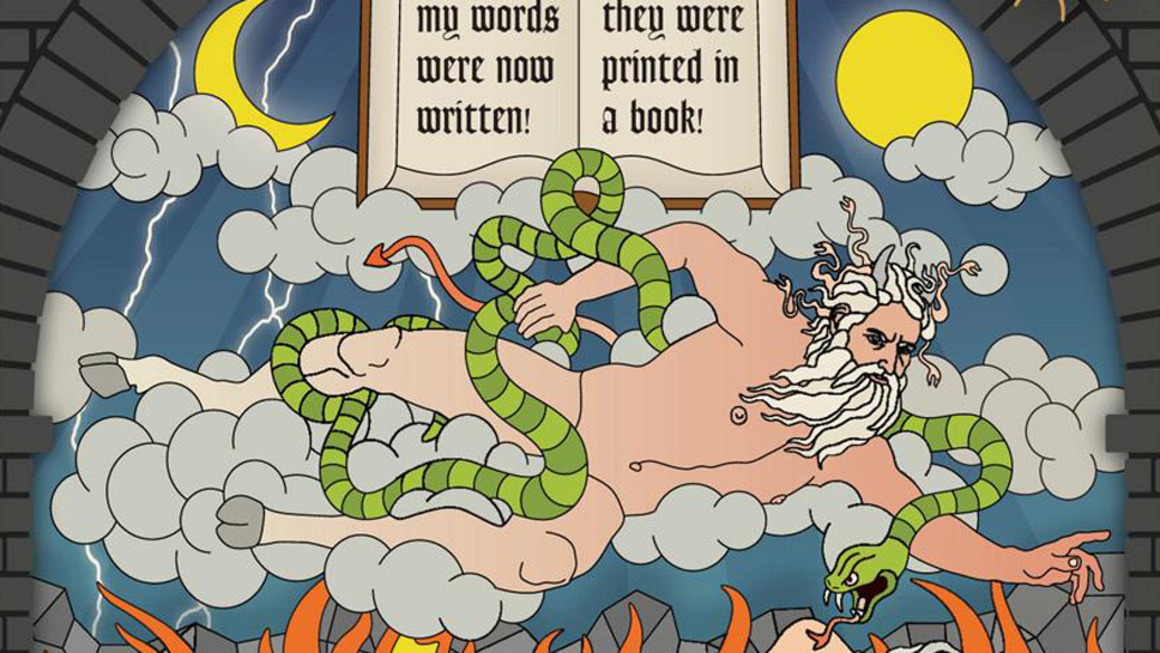 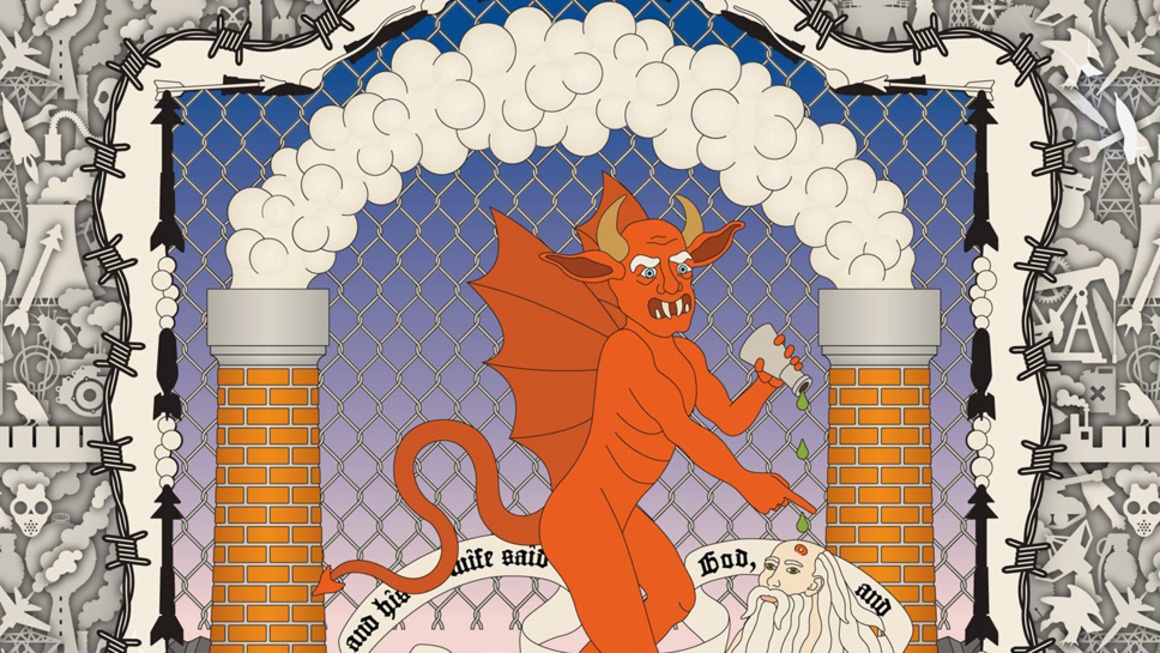 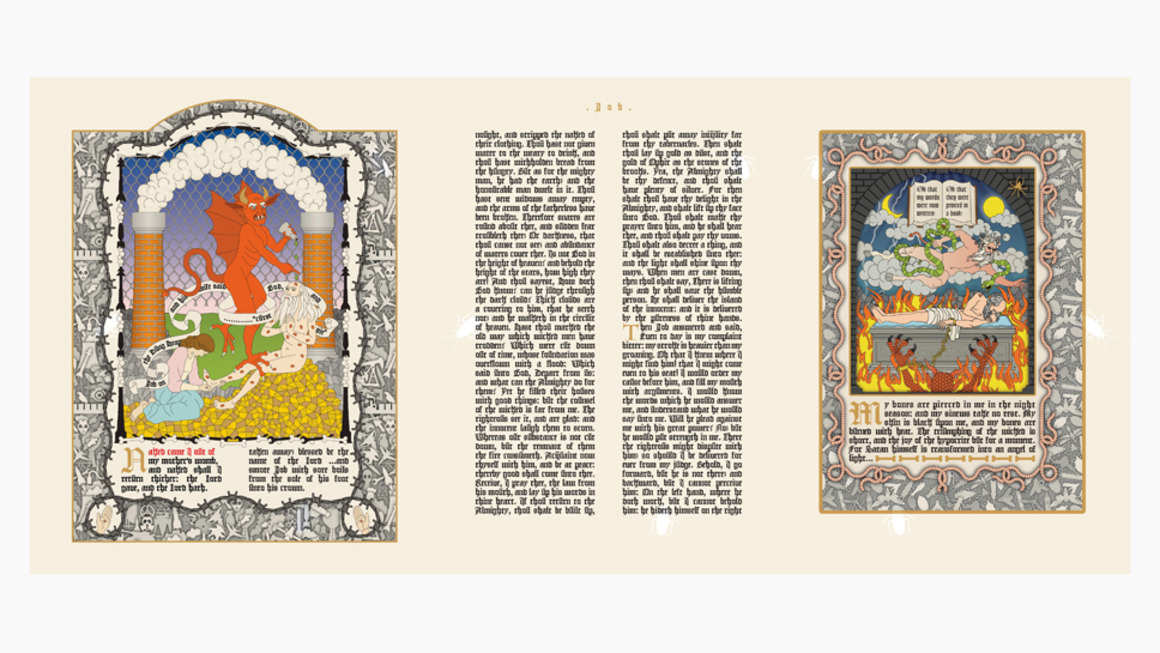 The decision to do a book on the work of the Antwerp-based Dutch designers Job Smeets and Nynke Tynagel of Studio Job in the year the King James Bible turned four hundred years young was as much deliberate as it was opportune. We'd known all along that the formal characteristics of a volume on Studio Job would ground itself in the visual language of a bygone age, which would employ gilding and leather (alas, the "bonded" variety) to create a sanctus libri.

The volume is split in two. Opening from one side is the catalogue of works; and from the other, a book-within-a-book: a modern illumination of the Old Testament story of Job. Unifying these discrete parts is Nynke's rendering of the Last Judgment, spread between the cover panels of the book. With the design monograph properly inhabiting the City of Man, the illuminated manuscript is announced by a depiction of the celestial heaven as described in the Revelation. Apart from comic touches that owe as much to Hergé as they do to Disney, the iconography is unmistakably Flemish. Nynke's vignettes tell of a world well acquainted with grief and strife. Modern-day Belgium, after all, was once part of the Spanish Netherlands, and its long, violent unmaking led to the death and privation of millions, in a magnitude not seen again until the machine age.

Heaven and hell is one of the many dualities that exist in the work of Studio Job. In the illumination of the Book of Job, light and dark, pleasure and pain, nature and artifice, grace and malice, the flesh and the spirit get equal billing. This elective schizophrenia is part of a unique inheritance: the double cure and curse of Smeets having been christened Job—with Nynke left to sort out its effects. Fact and fantasy conflate, roles often reverse, and relationships cannot help but assume biblical heft: Nynke illustrates the moment Job's wife urges him to "curse God and die." This illumination is bookended by another, where an irritated God, Laocoön-like, answers Job's plea for redress out of the whirlwind: "Who is this who darkens counsel with words without knowledge?"

The divine accusation of ignorance is paired with even greater confabulation. In an unsent "Letter to Murray Moss," dated December 19, 2026—a poem Job and Nynke occasionally deploy at speaking engagements—Job weaves a suspect biography of his origins. Within fantastic accounts of encounters between Job's Dutch grandmother and German stragglers in the Great War, the life of Eva Perón, the death of John Lennon, the sinking of the Titanic, the destruction of Guernica, and the firebombing of Dresden, this self-appointed "king of the losers" attempts to give voice to the ugliness that is often the undergird of beauty:

"Aesthetics is as ugly as sin and as lovely as the stars. . . . Revulsion is known to have an inspiring effect on the human race. Art begins where pure horror is transformed into absolute beauty."

To quote Job, I too "know very few examples of successful cover songs." One track we agree on was David Bowie's rendition of the Beatles' "Across the Universe" on Young Americans. Nynke and Job's sumptuous retelling of his ancient namesake's striving with both God and Satan can't possibly compete with the graphic consistency of the one in the Gutenberg Bible—but then again, John Lennon did co-produce Young Americans.

Ian Luna is a New York-based writer and critic. 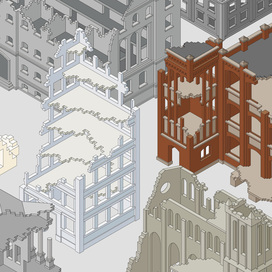