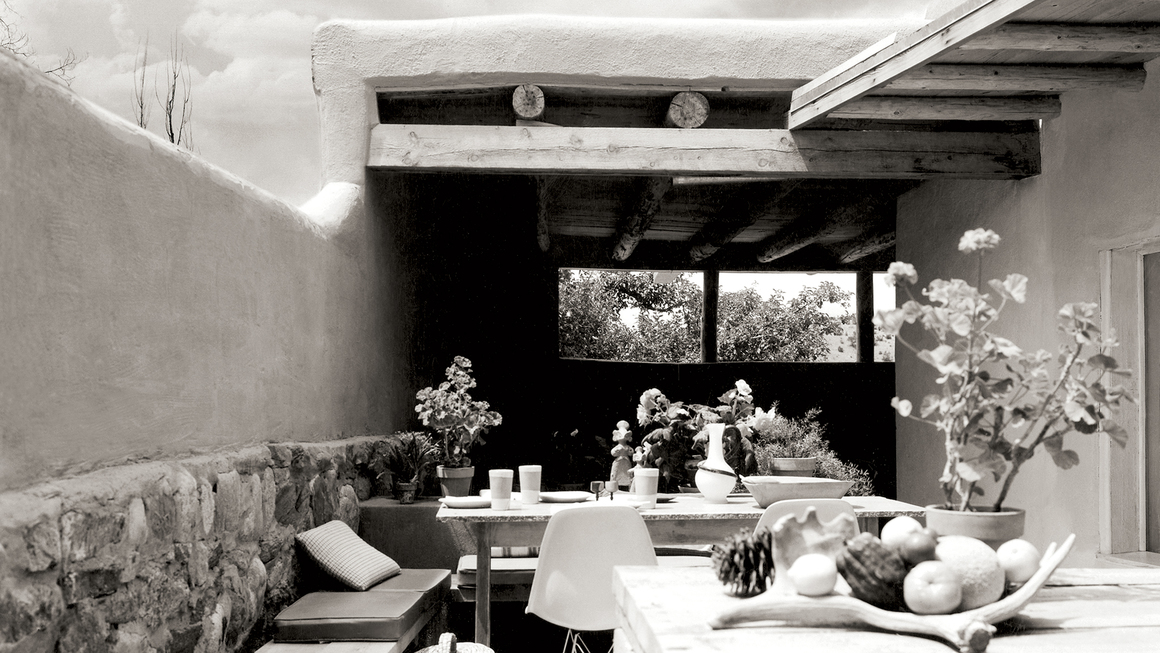 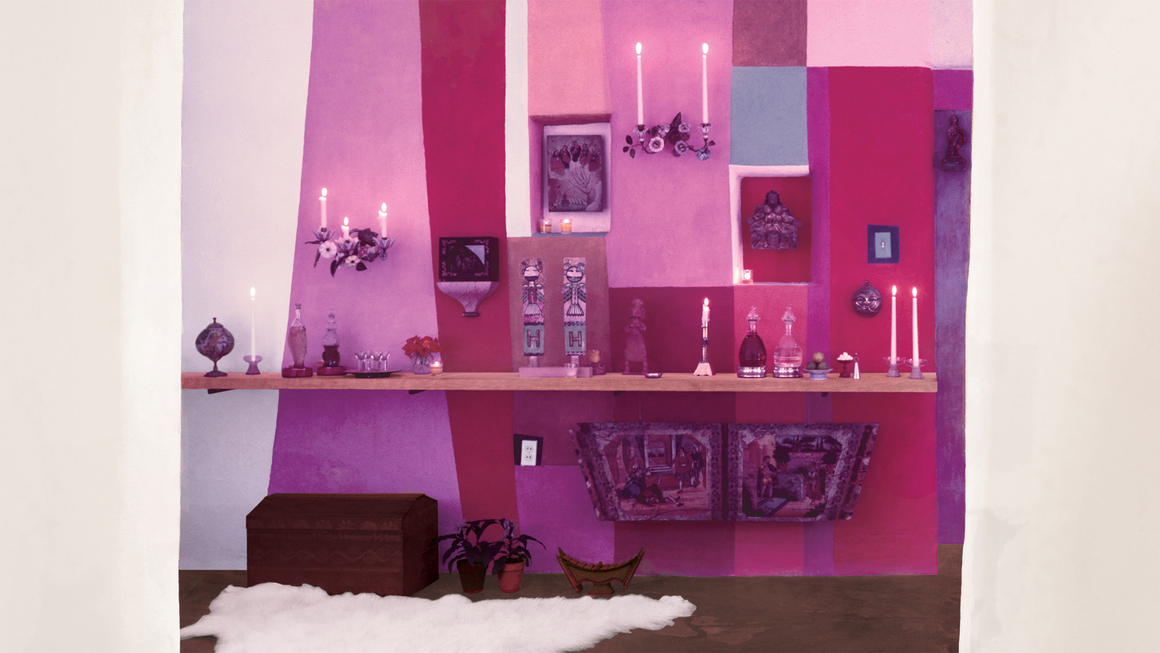 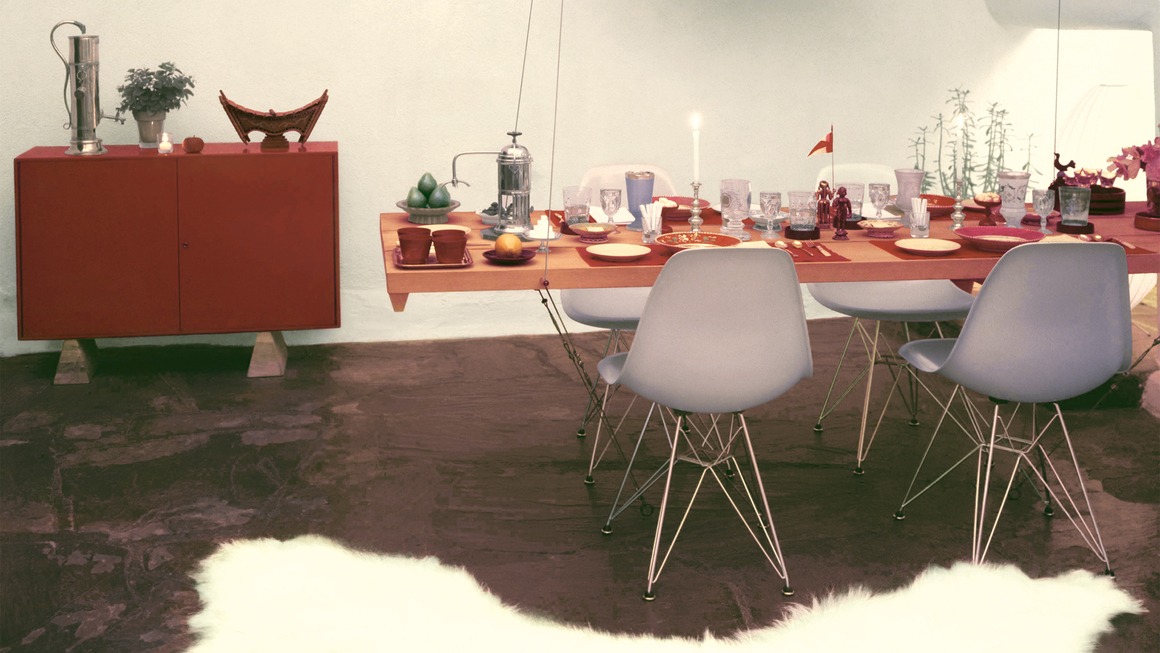 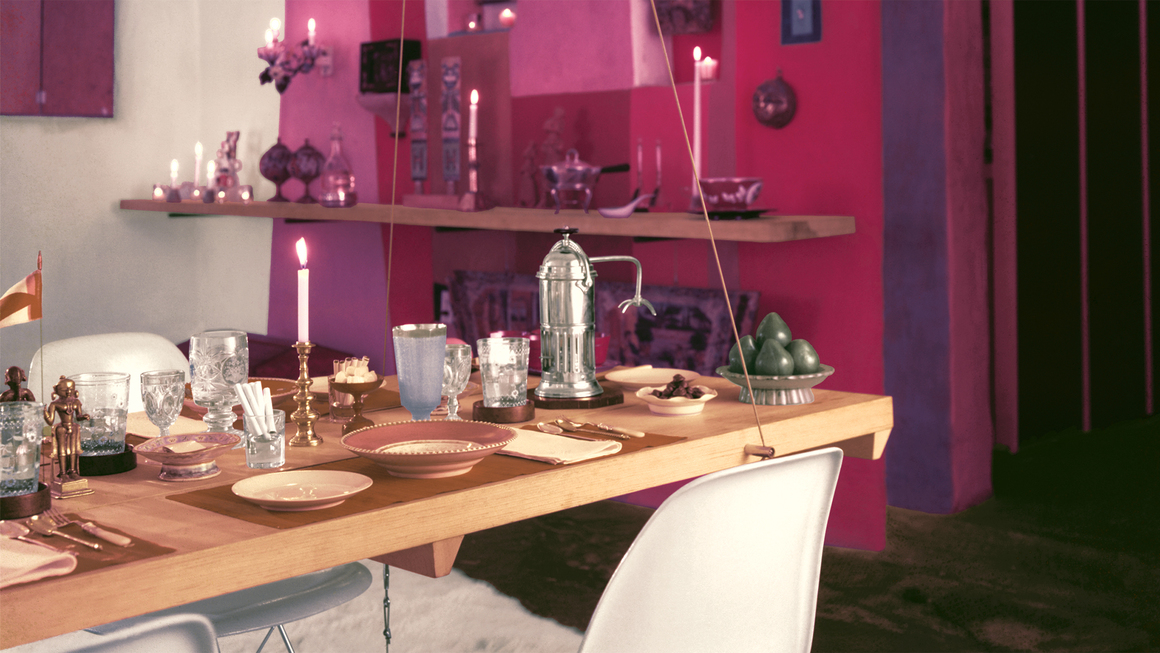 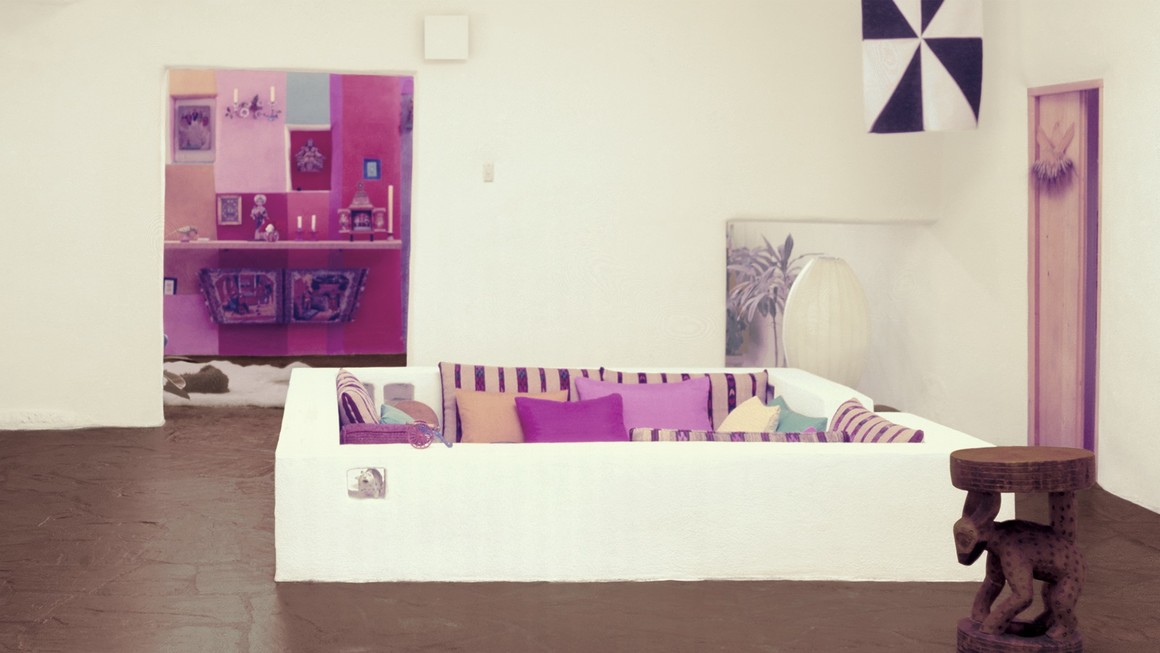 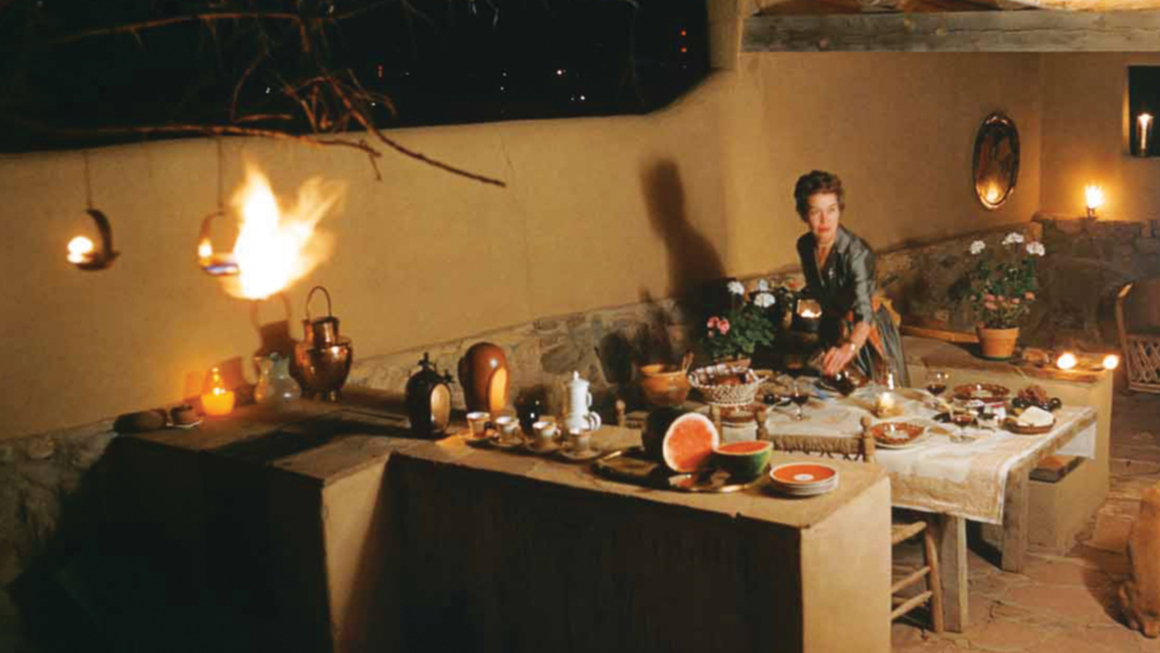 Moving from Grosse Pointe, Michigan, to Santa Fe, New Mexico, is a significant leap. Geography aside, the palette of the landscape, the culture, and even the light are all distinctly different. This contrast would have been even more apparent in 1953 when my grandparents, Alexander Girard and his wife, Susan, decided to move with their two children from an affluent cul-de-sac on Lothrop Road in Grosse Pointe to an adobe house that was formerly an art school on the east side of Santa Fe. In place of pavement were honey-colored dirt roads, neighbors were scarce and horses, goats, and cows were all visible from their front portal. Leaving behind a suburban life in the Midwest for the wide-open spaces in the “Land of Enchantment” was a decision that would strongly impact the aesthetic of my grandfather’s long and vast career and the shape and texture of my family’s lives as well.

My grandfather had a lifelong love affair with Latin America. The colors, the people, the crafts, the languages, the food were all aspects of what drew him again and again to explore the countries south of the border. In Santa Fe he found a sort of middle ground where he could continue his work for Herman Miller in Michigan, pursue other projects in the United States, and explore Mexico and her neighbors with ease. He was so convinced of his new locale that he often sent letters, poems, and telegrams to various friends and family in Michigan and farther east trying to convince them to join him and Susan in the magical Southwest.

In Santa Fe the architecture is formed from the earth itself, the air is dry and clear, and at sunset the sky is splashed with the hues of summer fruit. The history of New Mexico and Santa Fe in particular is old and attached to ancient cultures in a way that much of the rest of America has forgotten or cast away. While the overlap of Native Americans, Spanish colonials, and a newer Anglo population is deeply complex to say the least, this amalgamation also allows for a rich and varied coexistence that appealed to my grandfather. As an avid linguist fluent in multiple languages including Spanish, he was thrilled to learn bits and pieces of such native tongues as Navajo and Hopi. Though he was an American citizen, he had been raised in Italy and as such always identified as an immigrant. He often said he felt more at home among the diverse people of New Mexico than the homogenous suburbs of middle America.

At the time my grandparents moved to Santa Fe, it was a place where roadside altars honoring the Virgen de Guadalupe adorned with candles and vibrantly colored paper flowers were common; where trading posts were filled with regional crafts like ornate sand-cast silverwork, hand-carved Zuni fetishes in jet, shell, and turquoise, and stacks of wool Navajo blankets in bold, graphic patterns piled from the creaky wooden floorboards to the cedar vigas overhead; where chili ristras hung to dry on most front porches to be ground into a finger-staining red powder for enchiladas or reconstituted in a pot full of pozole; where the sweet smell of piñon smoke wafted through the crisp high-desert air. It was a place steeped in ritual, tradition, and a somewhat skeptical view of moving into the future.

While my grandfather was a very forward-thinking person, an avid reader of science fiction and a believer in technology and innovation, he also had a deep reverence for what had come before. He found joy in blending the old with the new, and his own homes were the perfect playground for this sort of experimentation. Though he had designed several structures from the ground up in Michigan, in New Mexico it was natural to take a more integrated approach. Choosing already existing buildings not only allowed for an interesting set of architectural constraints but also offered the opportunity to join a new community in a more quiet and subtle way.

My grandparents lived in two different homes in Santa Fe, which were situated across from one another on opposite corners of Camino Delora and Camino San Acacio. Slightly uphill from the historical church Cristo Rey, Alexander and Susan created two midsized dwellings that would morph and change over their more than forty years together. Influenced not only by new ideas and discoveries in material, color, and taste but also by the ever-burgeoning collection of folk art that they continued to amass throughout their life, their interiors were a living and breathing landscape. Home was a place at once livable and awe inspiring, comfortable, organized, and understated but teeming with visual surprises and tactile delights. To explore their home was an adventure offering new possibilities for discovery with each visit. Never ostentatious or rambling, those spaces were a place where light, color, texture, and point of view were considered with care, intention, and a deep sense of joy.

While the pace of my grandfather’s career never slowed upon his move to New Mexico, his perspective on work and life shifted. He was farther from business hubs like Detroit and New York City but the relatively remote location afforded him the ability to focus even more intensely on his work and maintain a prolific output. As his primary focus was on whatever project was at hand, he did not overly concern himself with critics or fame—though that didn’t mean they were not interested in him. My grandparents were also known for welcoming any and all interested parties into their home whether they were fans of his work, contemporary creatives, or members of the press. The Girard homes were photographed by many publications, and people were often struck by his commitment to his own tastes and lack of influence from popular fads of the moment.

Perhaps most unique at the time was his intense fascination with folk art, and so it makes sense that his final and most personal project of his career was the permanent exhibition of his folk art collection at the International Museum of Folk Art in New Mexico. While he was courted by museums in much larger metropoles, he was utterly convinced that the collection he’d spent his lifetime amassing should remain in New Mexico. Working for several years and with only a few assistants, Alexander Girard left the magnum opus of his life’s work to his chosen homeland.

Santa Fe has long been a place of pilgrimage for artists, historians, collectors, mystics, and people interested in alternative lifestyles. The land itself seems to vibrate at its own distinct frequency and my grandfather felt this vibration. He knew there was magic to be inspired by but that should not be taken advantage of—and it was with this reverence and respect that he built his life and career in this incredible place.

Aleishall Girard Maxon is an artist who, along with her brother, Kori Girard, co-directs Girard Studio. She lives and works in Berkeley, CA. 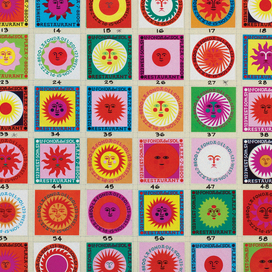 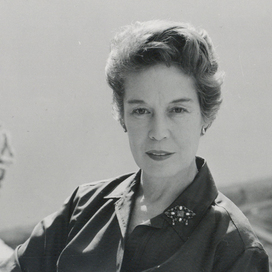 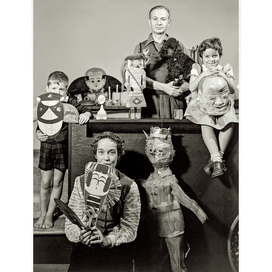 What We Collect
x