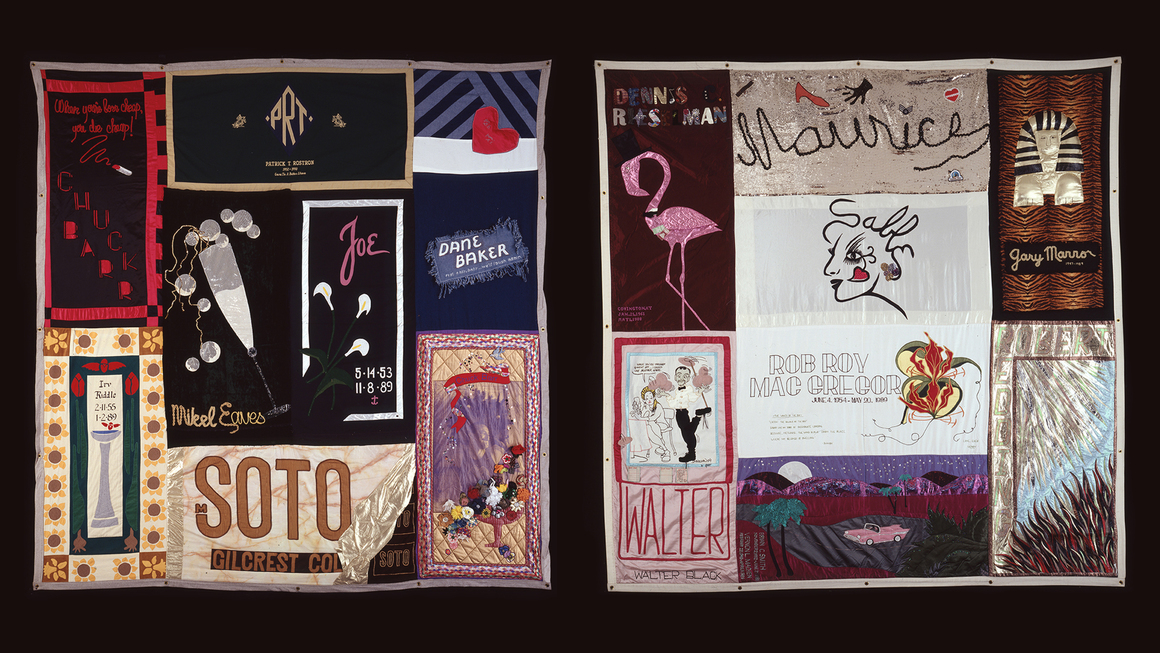 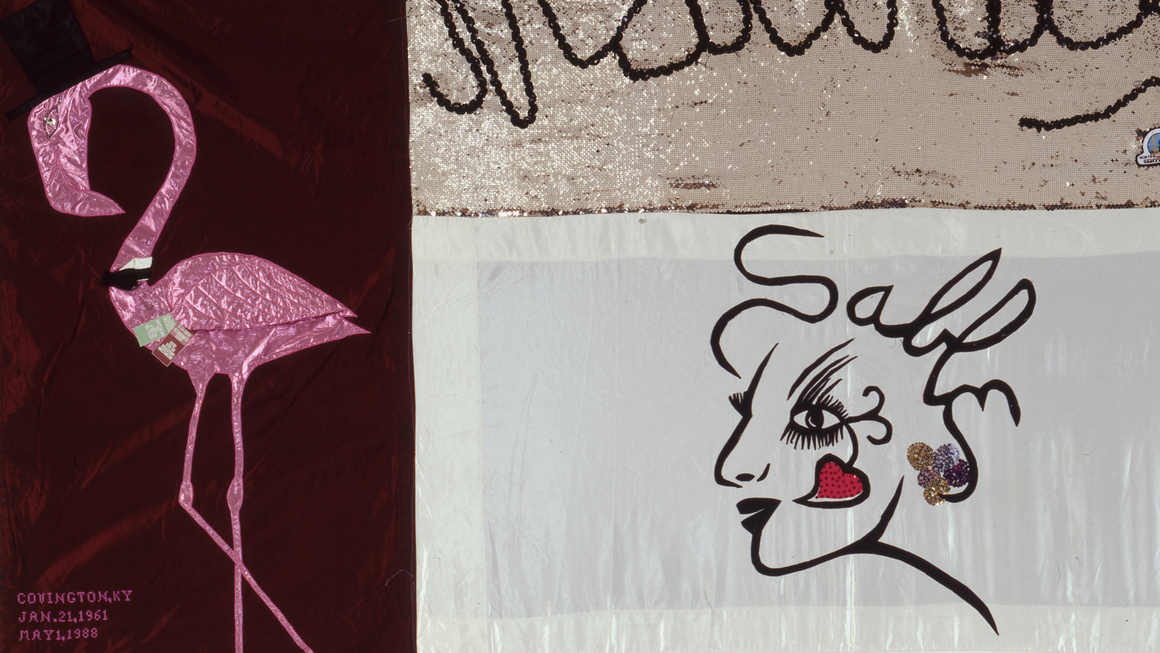 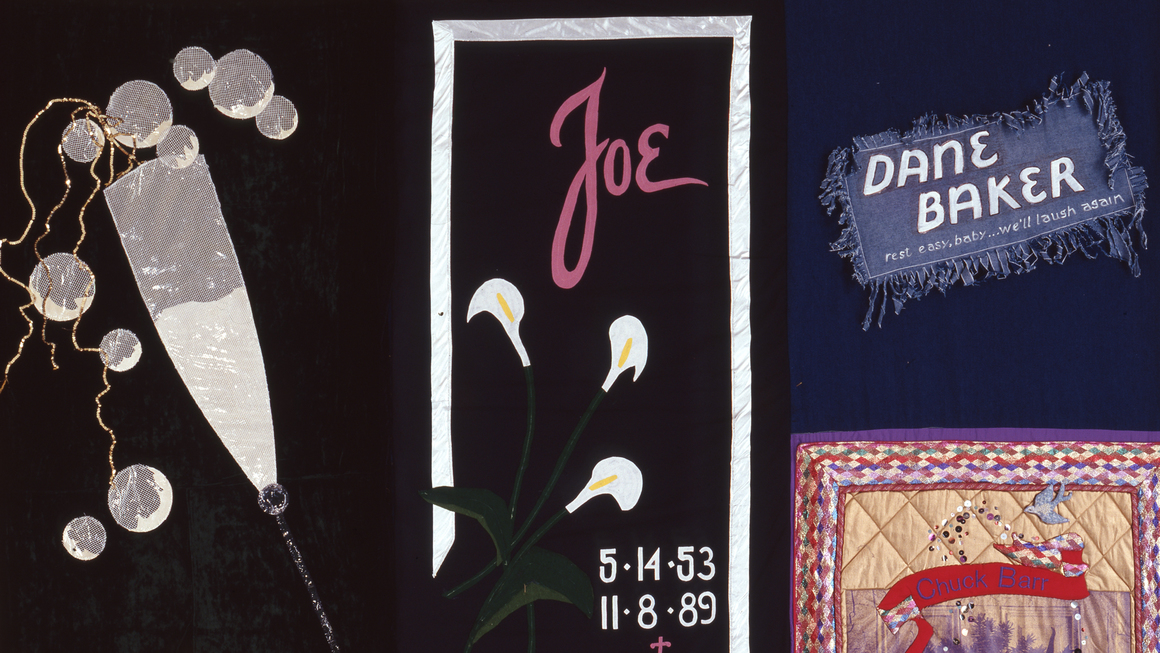 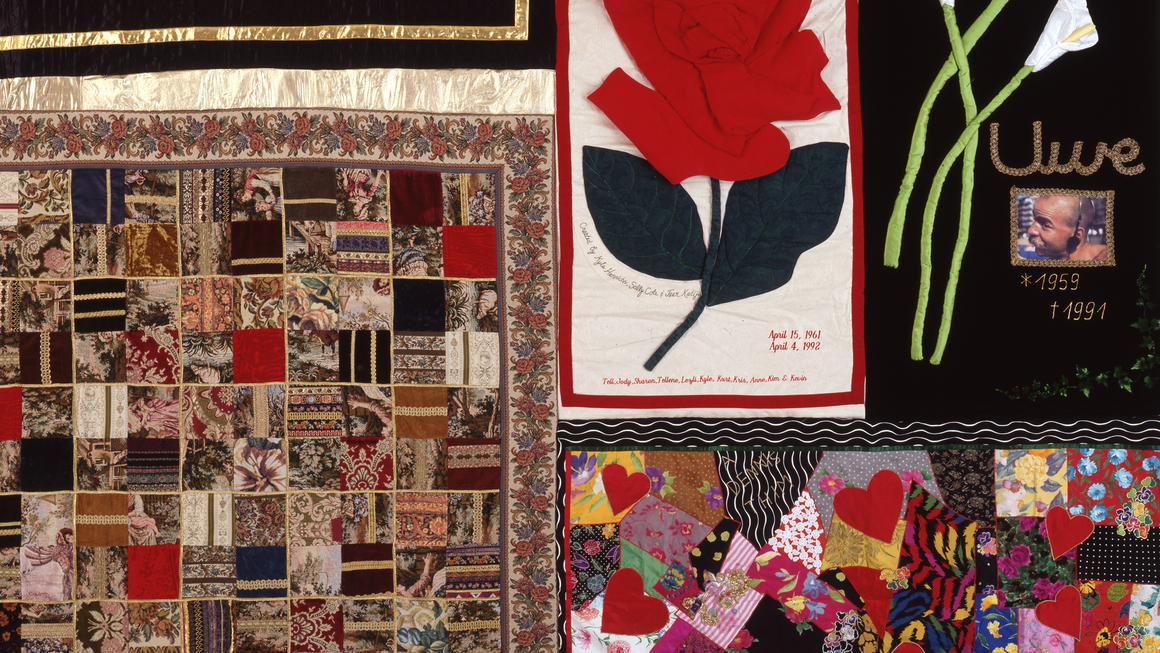 My friends were some of the first to die of AIDS in the early ’80s. I was going through a lot of grief and nobody really knew how to deal with it. And then I found the Quilt. I went to the very first meeting. I made two panels and went to drop them off. Mainly I just needed a place to vent and talk about my friends.

Cleve [Jones, cofounder of the San Francisco AIDS Foundation] started the Quilt in 1987. The idea began at a march the day the thousandth person died of AIDS. I went on that march. We wrote people’s names on postcards, took them to the federal building, and stuck them up on the wall. Cleve stepped back and thought it reminded him of a quilt. Each panel is three by six feet—the size of a grave. Cleve wanted to lay down his dead in front of the White House and make them do something about it.

We protect the panels—and we’re tough on them in many ways. But that’s what we made them for. We have to walk on them to do an unfolding ceremony. Looking through the early ones, you can see how the light has faded them. We can’t wash them—there are so many mementos attached to them. I like that look, in some ways. I call them the old soldiers. There’s a lot of beauty in the age they show. They show what they—and we—have gone through.

Nothing replaces the tactile and personal experience of seeing the Quilt in person. We want people to be able to touch it. If someone comes up in a wheelchair we will unclip it and roll it up onto their laps. Somebody suggested we archive Cleve’s panel and not show it anymore because it was the first. And I said no. Cleve didn’t make that panel for that. And it’s not fair to the others it’s sewn to. I made my panels to fight. I didn’t make them to be put in a museum and not be used and not be touched. The Quilt is an activism and education tool. We teach compassion.

We receive new panels on a near daily basis. There are often all kinds of hidden details; I always look at the backs to see if they have pockets. I bundle the panels into squares of twelve which I absolutely love doing because I get to handle every single one. I lay them out in a mix of horizontal and vertical designs. I think about color, weight, theme—a lot of different things. I’ll put ones with larger lettering on the top and smaller text at the bottom so that, when they’re displayed, it’s easy for people to read them. I won’t put a really simple panel with a bunch that might overshadow it. I try as hard as I can to make it a mix of the world; that’s the way I like to look at it. But the number one rule is that they’re bundled by panel-maker requests. If panel-makers send in three at once that they want bundled together, I’ll do that.

People have tried to get me to approach bundling digitally. No, no, no. You can’t tell in a photograph that there’s something on the underside or that it opens up or that it has lights on it. A lot of times I’ll receive panels and be so touched by them that I’ll call the panel maker to say, “Wow.” I’ve opened up boxes where I could almost feel the person, you know. I just love handling them.

People can put anything they want on the Quilt. I’ve only ever had to take two, maybe three things off. One was a hypodermic needle. I didn’t remove the whole thing—just the tip. There was also a light bulb. And an air conditioning vent! I tried to talk the guy out of including it, to make a copy, and he went off on me—“This is it! It’s got to be this!”—until I backed off. That was when we understood we weren’t going to tell people what they could or couldn’t put on their panel. Ideally we’d like it to be lightweight and durable, but ultimately it is their panel.

On a regular day I have probably 130 things that need some kind of repair. That could be anything from a missing grommet to an edge torn away completely. Mementos come loose—rings, earrings, jewelry, teddy bears, notes, photos. Some fabrics last longer than others. Satin, especially, starts to kind of pull apart. But maybe that fabric meant something to that person. I do as much and as little as possible.

I’ve touched every single panel—and I have the hands to prove it! My hands are destroyed, but they are not painful. Saying that, though, hundreds of people across the country have helped not just by making their own panels but by sewing the bundles I have chosen throughout the years. I would never want to take credit for sewing the whole Quilt.

People don’t like dealing with death. We as a country don’t want to think about it. I’ve lost a lot of people. I’ve made over 120 panels. When I look at a panel, I see how much that person meant to someone. When you make a panel, you’re not ending something—you’re starting something. You’re bringing that person back, and that’s painful. It’s not really about the Quilt, it’s about helping somebody talk about their loved one. And to be a small part of that, to help somebody work through their emotions, means the world to me. I’m not afraid of tears.

Gert McMullin is one of the six activists who cofounded the AIDS Memorial Quilt in San Francisco in 1987 and has served as the Quilt’s conservator ever since. In partnership with the National AIDS Memorial and the New York City AIDS Memorial, Maharam will host a series of public quilt-making workshops at the Whitney Museum on October 14 and 15, 2022 to mark the Quilt's thirty-fifth anniversary. 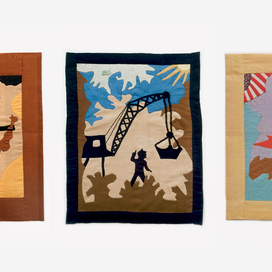