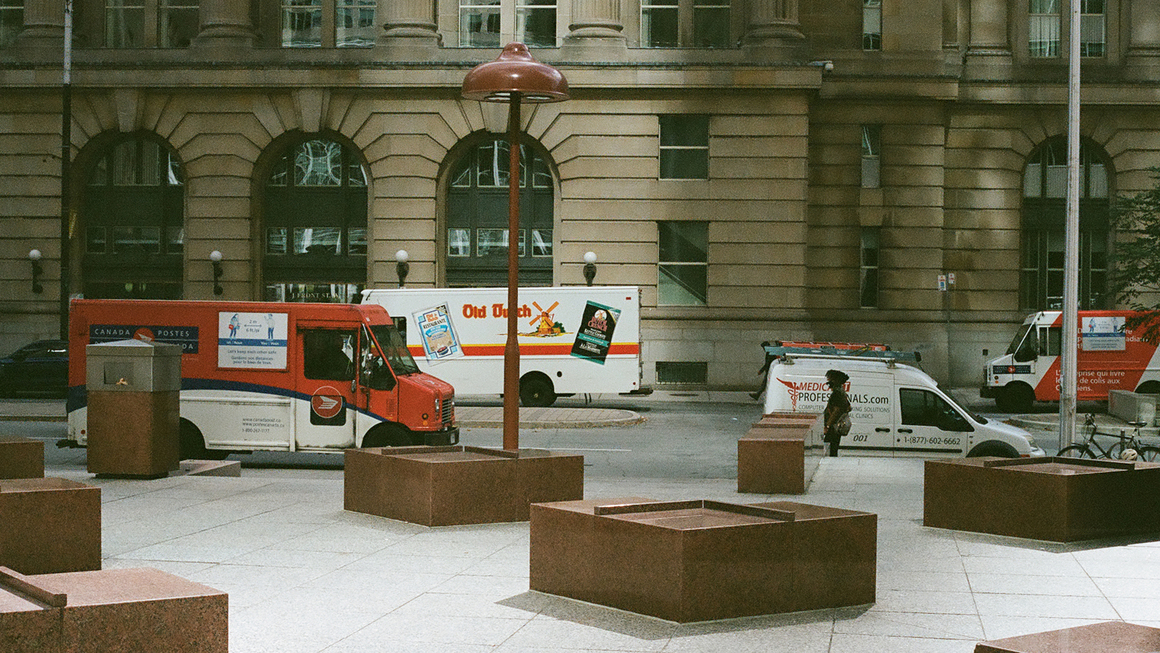 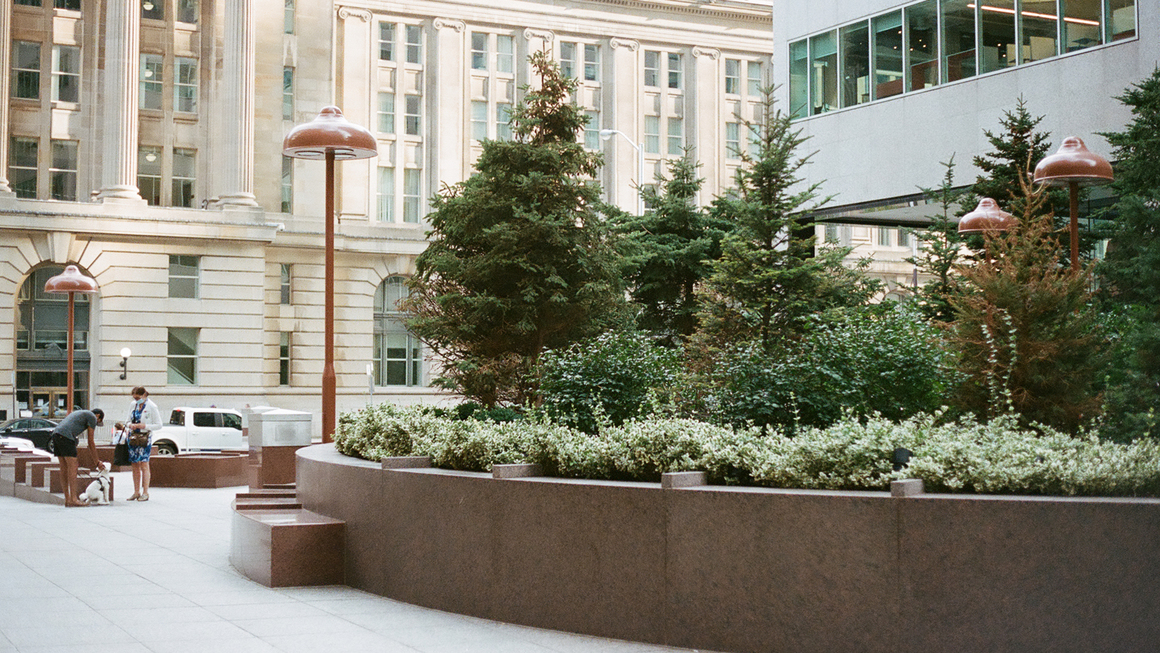 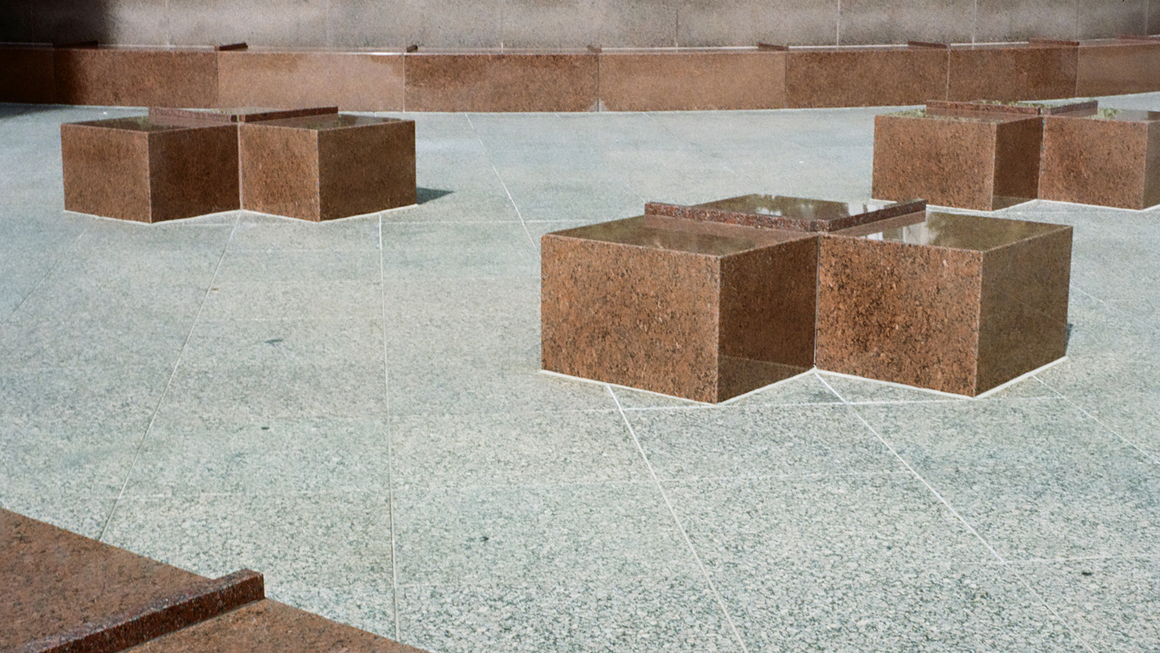 Conceived by American artist Scott Burton, Garden Court is a work of public art situated in one of the busiest areas of Toronto. Its orchestrated design encompasses an outdoor plaza comprised of seating and lampposts surrounding a central island of plantings and a reflecting pool. Yet despite its prominence, a curious mixture of artistic intent, tragic circumstance, and neglect has kept it obscure. Hidden in plain sight, it bears no plaque or signage.

Garden Court is the work of an artist whose conceit was to create something functional and unassuming that would operate—both conceptually and at face value—as a small gesture of courtesy within the hustle and bustle of the city. Burton’s practice adopts the ostensibly banal materials ubiquitous in corporate architecture, binding Garden Court to the lobbies and other courtyards that populate the financial district. At almost any hour of the day people are sitting atop its various granite benches, eating, chatting with friends, or simply passing time, oblivious to its origins as an artwork while making use of it just as the artist intended.

Burton died of AIDS in 1989 at age fifty, his career terminating just as it entered its prime, and Garden Court, completed in 1993, became a final as well as a posthumous work. The local curator Peter Day, who sought out Burton for the project, died in 1990. Without the artist or the curator’s stewardship, the allusions embedded in the work—from the modalities of queer inflection through to utopian design—were left to recede.

Commissioned by a massive corporate entity, Garden Court sits diminutively at the base of skyscrapers—a vignette illustrative of an uneasy juncture in the city’s history, one that saw Toronto’s queer and art communities ravaged by the AIDS crisis and an unmitigated rise in commercial control of urban space.

Garden Court sits within Brookfield Place, which occupies a large city block of Front Street, threshold of the financial district. The neoclassical Union Station at its kitty-corner issues an endless flow of trains, buses, and subways connecting downtown with the myriad suburbs. Many explorations of Toronto begin here. One notices benches, the evergreen shelter of its planted island, places to consult maps, check messages, make plans, or simply sit and observe.

The most striking feature of Garden Court’s design is its lampposts. Painted a pleasingly dated caramel (or sienna, a perennial hue in the paint boxes of art history), the slender metal poles rise some fifteen feet to support quizzical lampshades whose puckered shape brings to mind nipples or mushrooms. Each is outfitted with three circular recessed lights, which, when looked at from below—particularly at night—suggest the thrusters of rockets or hovering flying saucers. They’re too playful to ignore; a visitor notices the erogenous, glandular, nurturing, mystical, sylvan, and sci-fi allusions that seem to indicate something is out of place on Front Street.

Burton was best known for making sculpture in the form of furniture: benches and stools, chairs and tables. “Sculpture in love with furniture,” as he put it. Using this idiom, Burton provoked amorphous, volatile, even sensual attitudes out of otherwise innocuous, mostly streamlined forms that superficially appeared as minimalist art. There was, and remains, a chameleon quality to his works’ expression. As if orating sternly to the public about diffuse social and aesthetic dynamics, they also speak sotto voce with a queer cadence.

Burton’s dictums, whether recondite or simplistic, also tended to carry an insolent tone—he liked to strike at orthodoxies wherever he found them. Interviewed in 1980 he said, “No mere maker of visual signs can be exemplary, can propose a sufficient moral authority or model of psychic liberation in a time like ours, a time convinced that it is proceeding toward apocalypse.”

Paul P. is an artist living in Toronto. Along with curator Rui Mateus Amaral he is working towards a publication on Scott Burton, Peter Day, and Garden Court supported by ArtworxTO: Toronto’s Year of Public Art.