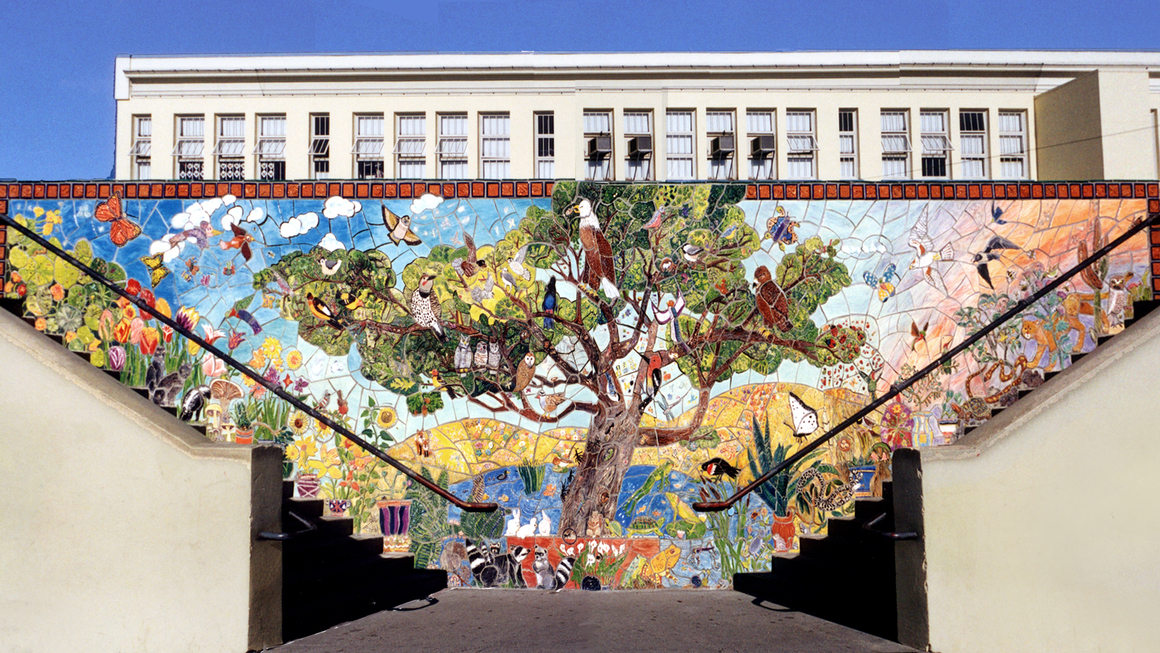 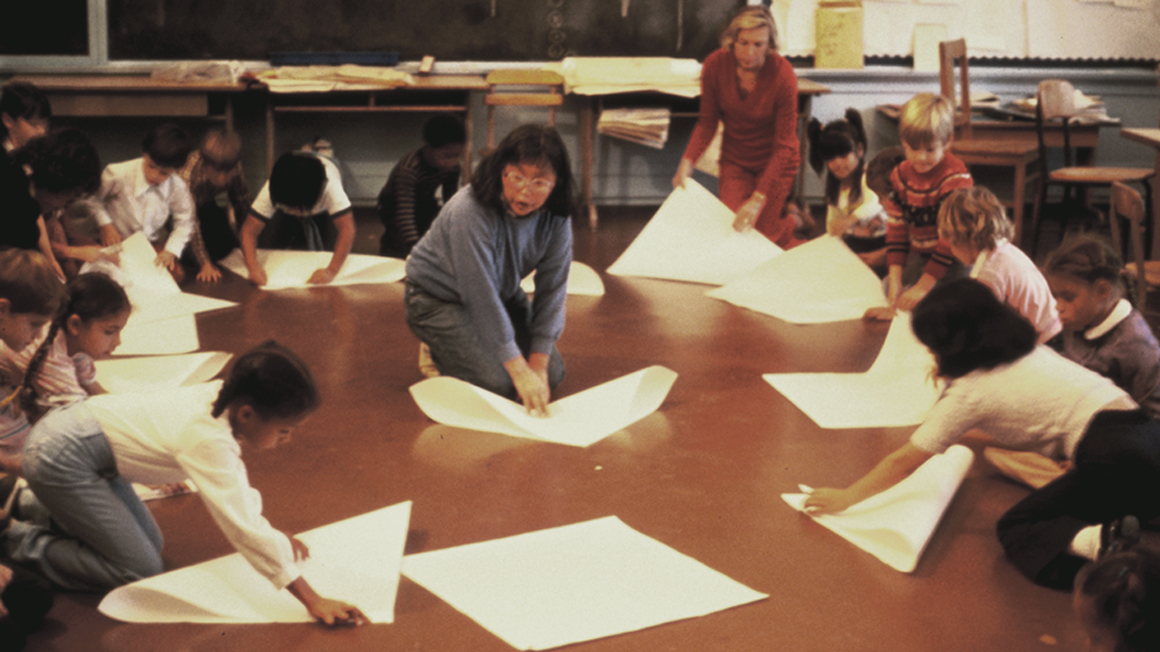 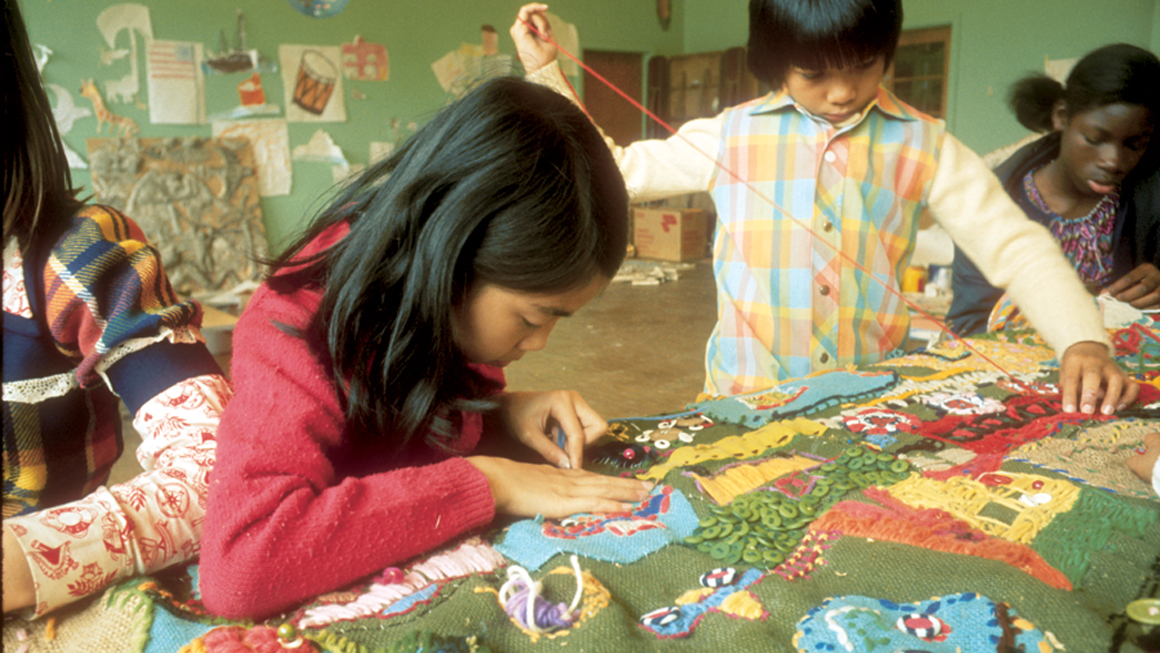 When her son Paul returned from a school art workshop clutching a colored ditto sheet, Ruth Asawa decided to act. He was the youngest of her six children, three of whom attended Alvarado Elementary School in the Noe Valley area of San Francisco. In the 1960s, at Alvarado and indeed in all San Francisco public schools, art was not part of the curriculum; it was up to the discretion of the classroom teacher as to whether the students had art education at all. As she strongly believed that children should be taught art by professional artists, Ruth volunteered in the classroom and recruited other artists and parents to do the same.

Asawa was a sculptor whose conviction that artists make the best art teachers stemmed from her experience in the late 1940s during her studies with the designer and painter Josef Albers, inventor R. Buckminster Fuller, the mathematician Max Dehn, and choreographer Merce Cunningham at Black Mountain College, the experimental art school in North Carolina. Determined to ensure that Paul and his peers would be equally enthused by the arts, she volunteered to run art classes at Alvarado School in 1968 with another parent, the architectural historian Sally B. Woodbridge. Half a century later, their legacy is hailed as an important influence for the teaching of art and craft in schools worldwide.

As well as studying under practicing artists at Black Mountain, Asawa had studied under artists as a teen when her family was interned in 1942 following Japan’s attack on Pearl Harbor. Her parents were Japanese immigrants, and Asawa’s father spent the next two years in a New Mexico detention camp, while she was interned with her mother and siblings, first in two horse stalls at the Santa Anita racetrack, and then in tarpaper barracks at an internment camp in Rohwer, Arkansas. At Santa Anita, three fellow internees including Tom Okamoto, Chris Ishii and Ben Tanaka—who were also Walt Disney animators—taught art classes. Asawa particularly enjoyed landscape artist Tom Okomoto’s teaching method, just as she would relish learning from Albers and the other gifted artists at Black Mountain College, the most progressive American art school of the time.

In 1949, Asawa moved to San Francisco and married the architect Albert Lanier, whom she had met at Black Mountain. The first two of their six children were born the next year. Working from home, Asawa raised the kids while establishing herself as a talented artist, whose intricately looped wire sculptures were exhibited in three Whitney Biennials during the 1950s.

She and Woodbridge started their work at Alvarado School in 1968 with an experimental summer school in the cafeteria, where students were taught to weave on looms made from packing crates and to make sculptures from papier-mâché. The classes proved so popular that they continued in the fall during the school’s regular forty-minute slot for creative activities. Student work was displayed throughout the school, and Asawa began planting summer flowers and spring bulbs in the yard.

“Having grown up on a farm, Ruth loved gardening, and she wanted the children, parents, and teachers to share her joy in it and making art,” says Asawa’s daughter, Aiko. “We sort of take it for granted now that schools will have gardens with trees, vegetables and all sorts of things, but it was groundbreaking then.”

Asawa emerged as an adept fundraiser by securing donations from civic leaders and corporations. New activities were introduced including drama, music, photography and stained glass. In 1970, another parent, the muralist and sculptor Nancy Thompson, organized the creation of a huge mural in the school yard that depicted the neighborhood in mosaic tiles given to Asawa as payment for a commission. Several hundred students made the mural, and the following spring Thompson organized a similar project at Edison, a nearby elementary school that had adopted Alvarado’s art program. In the early 1970s, the Alvarado School Arts Workshop secured public funding, which enabled artists to be paid to teach. More and more public schools introduced similar initiatives. At its peak, the Workshop ran in fifty San Francisco public schools, providing paid employment for artists, potters, musicians, and gardeners, and attracting several hundred parent volunteers.

Asawa soon joined the boards of the California Arts Council and the National Endowment for the Arts. At home, she spearheaded the creation of San Francisco’s first public arts high school in 1982, which today bears her name. But by then, the Alvarado program was suffering from public funding cuts and declining artist volunteers.

Alvarado’s principal decided to revive the arts at Alvarado School and secured funding as well as Asawa and Thompson’s support. With new equipment, activities and teachers, Aiko and Paul became artists-in-residence. Paul led the production of a new mural in the schoolyard. “It was very special,” he says. “Our art classes weren’t treated as add-ons by the teachers but as part of the school.”

Among the students was Elizabeth Nattinger, who now works in Maharam’s communications team. She and her sister both attended Alvarado, and their parents volunteered there. “Ruth had an amazing approach: no-nonsense, focused, and intense as she helped kids to transfer their drawings onto the wall,” Nattinger recalls. “Every child was invited to contribute to the mural. It was wonderful because the school was so diverse and many of the kids had no prior exposure to art, but everyone had a self-portrait on that wall.”

When Asawa died in 2013, she was renowned not only as an influential artist with work in major museum collections, including those of the Whitney and Guggenheim, but as a pioneer of community arts education. As passionate as Asawa was about art, she always regarded the Workshop as a means of empowering students to feel more confident and capable in other spheres too.

“Educators know that if children have success in one area it helps them in other areas,” she wrote in 1970. “The arts and crafts have built-in opportunities to learn by trial and error and to find basic principles. […] Art can only be taught by artists. […] If you have never made art, you cannot teach the making of art. It is as simple as that.”