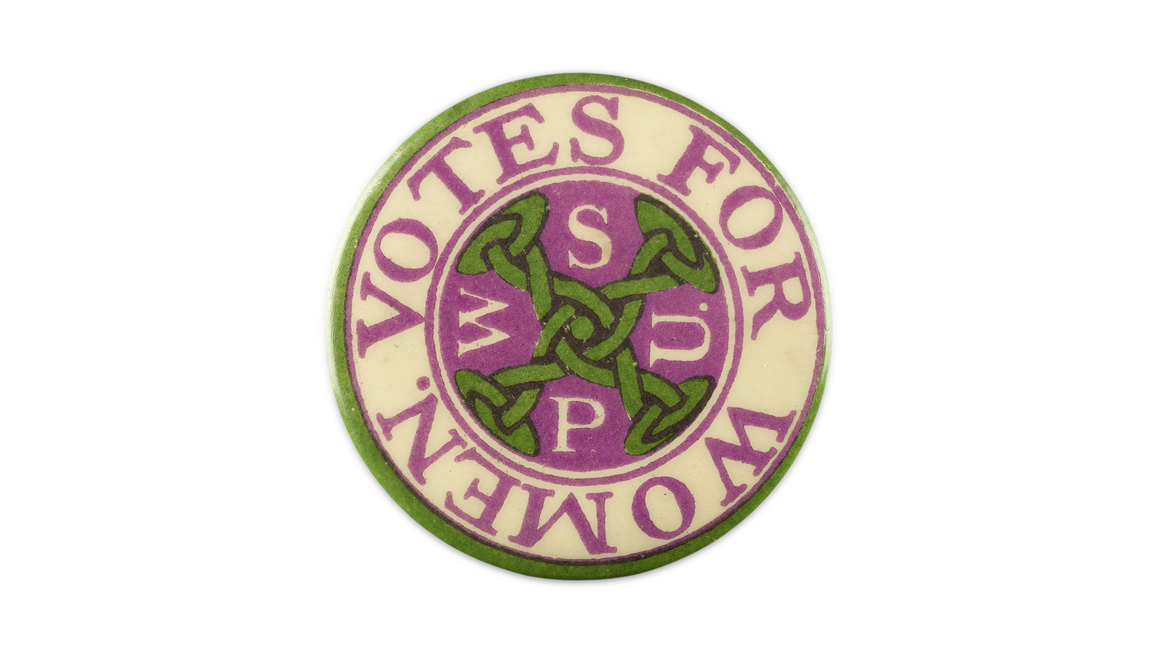 Tens of thousands of women had promised to come. Thirty special trains were scheduled to ferry them to London from some seventy towns throughout Britain. With weeks to go before what the leaders of the Women’s Social and Political Union expected to be the biggest-ever demonstration of support for their Votes for Women campaign at Hyde Park on June 21, 1908, they were determined to make the event as memorable as possible.

One way of doing so was to ensure that it would be visually spectacular. The problem was that the would-be protesters were a disparate bunch from different parts of the country, many of whom were too poor to buy new clothes, banners, or even little pins for the demonstration. The WSPU’s solution was to ask them to wear white, if possible, with purple and green accessories. Failing that, the women were instructed to tie ribbons or scraps of fabric in those colors around their clothes and to bring flags or banners in the same hues, making them from strips of old sheets or dresses, if need be.

So effective did the trio of colors prove to be that the WSPU adopted it for future campaigns, and its impromptu visual identity remains a stunningly successful example of political symbolism today.

The palette had been chosen a month before the Hyde Park event by Emmeline Pethick-Lawrence, a wealthy philanthropist and generous benefactor of the WSPU. Her rationale was that purple represented dignity; white, purity; and green, hope. But the architect of their transformation into so compelling a visual identity was her friend Sylvia Pankhurst, whose mother, Emmeline, and elder sister, Christabel, were the leaders of the WSPU.

Once a prize-winning student at Manchester School of Art and the Royal College of Art in London, Sylvia had long been entrusted with designing posters and decorating halls for her parents’ various political campaigns. By the summer of 1908, she was twenty-six years old and had forsaken her artistic ambitions to dedicate herself to the WSPU’s cause. No sooner had Pethick-Lawrence identified the movement’s colors than Sylvia flung herself into designing banners, bunting, and pins and supervising their production. As well as issuing instructions to WSPU members on how to make their own color-coordinated regalia, she organized the decoration of several buses and a protest boat, which was to be moored on the River Thames outside the Houses of Parliament while Britain’s politicians were taking afternoon tea on the terrace.

Working “at breakneck speed,” as she put it, Sylvia discharged her duties with aplomb before leading a seven-thousand-strong procession into Hyde Park. So successful did her color strategy prove to be that Emmeline and Christabel, gifted self-publicists who rarely missed an opportunity to further their cause, urged her to apply it to all of the WSPU’s activities.

Besides art directing other rallies and a “Women’s Exhibition” held in a London skating rink, Sylvia and her collaborators designed “official” memorabilia in the three colors to raise funds for the WSPU. Sympathetic (or opportunistic) retailers and manufacturers followed suit by selling “suffragette” souvenirs, including hat pins, tea, jewelry, and bicycles.

As the WSPU’s campaign became increasingly militant, suffragettes slipped unobtrusively into political meetings and public buildings in elegant white dresses before donning purple and green sashes and heckling politicians or committing acts of protest, such as slashing paintings in museums. Sylvia designed a special brooch, enameled in the three colors, to be worn by the women who were imprisoned for the cause and a hunger strike medal in the same hues for those who refused to eat as a protest while in prison.

And when she fell out with her mother and sister in 1914, and the East London Federation of Suffragettes, led by Sylvia, was expelled from the WSPU, she and her colleagues decided to continue their campaign independently under the same palette of purple, white, and green with a dash of red to symbolize freedom.