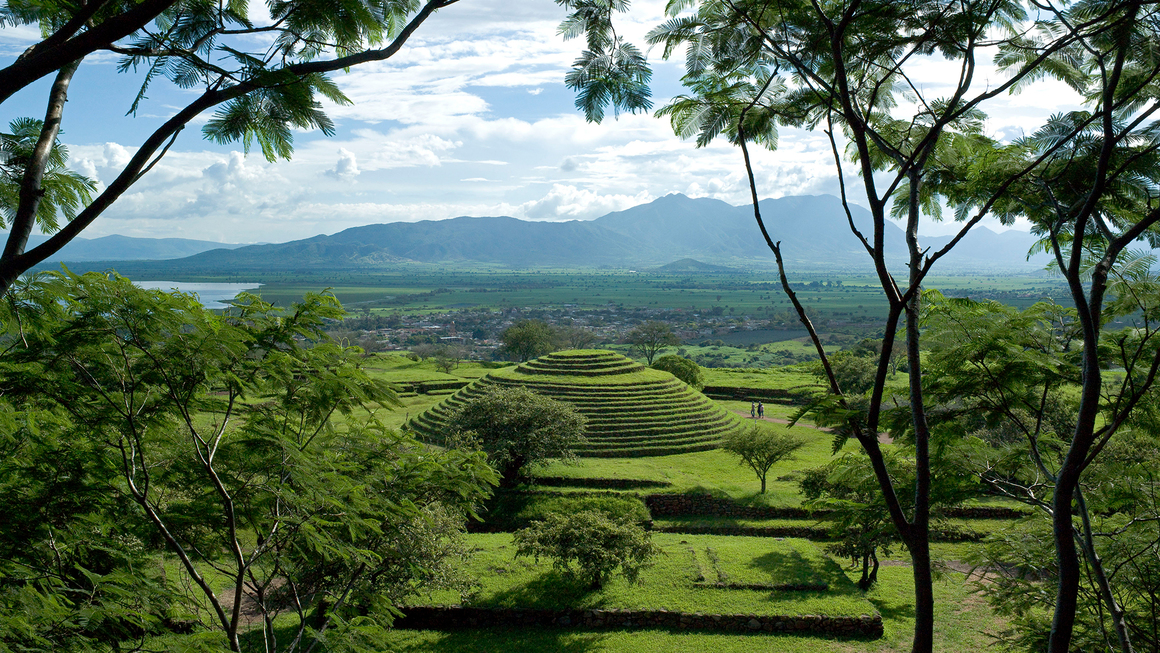 Could We Really Be the Only Circular Pyramids?

“Could we really be the only circular pyramids?” ask the Guachimontones.

The defining characteristic of the Guachimontones archeological site in tequila country near Guadalajara in the Mexican state of Jalisco is the visually arresting, round terraced pyramids arranged like cogwheels of an ancient machine atop a hillside with views of lake La Vega and the town of Teuchitlán. The secondary characteristic is the active and creative discourse around them. Apparently, there are many angles to a round pyramid . . .

The site is speculated to be around 2,500 years old, and so the city complex of Guachimontones has been known for centuries by locals, even while covered in vegetation, and looted frequently for ceramic artifacts. Guachi montones, meaning “closed mounds” or “gourd mound” in a casual Nahuatl-Spanish patois, is also the official name for the archaeological site, although the name of a nearby town, Teuchitlán, sounds more pyramidal to my ears.

Guachimontones can be compared to other round pyramid complexes in Central America including Cuicuilco in Tlalpan, southwest of Mexico City, along with other iconic circular stacks such as the Waldviertel Pyramid in Austria and Devo’s 1980s “energy” hats. But why are the pyramids at Guachimontones round? It’s possible that the pyramids, sheltering elaborate shaft tombs below, were built to resemble nearby volcanoes, such as the adjacent Tequila volcano that enriched the soil and endowed the area with large deposits of shiny black obsidian, which the ancients used to make sharp tools. Furthermore, the pyramids were likely dedicated to Ehecatl, the god of the wind. Wind blows in all directions, therefore rounded structures complement Ehecatl’s phenomenon more strongly than those using an axis associated with sun or moon temples. The construction of concentric circles also suggests they were built up in stages, with one round layer building up another like the dipping of a wax candle.

In its 1,200-year-long heyday, Guachimontones hosted spectacular ceremonies featuring towering vertical poles mounted on top of the pyramid for voladores (flyers). This ancient acrobatic ceremony wherein voladores were tethered to the top of a hundred-foot pole to fly in elliptical patterns around it is more commonly associated with Papantla, Veracruz. The Guachimontones version, however, may have had only one flyer rather than four or five. Other ceremonial dances would have been performed in the circular plaza below and in various temples mounted on the banquettes that pinwheel around the dance floor.

At the aptly named Interpretive Center, the visitor center of the Teuchitlán Guachimontones archaeological site, you learn the correct assertion that Guachimontones has the world’s only circular pyramids with patios, plazas, and banquettes. (Don’t forget the banquettes.) The infographics demonstrate that Guachimontones was but one of many hundreds of sites that comprise the Teuchitlán tradition: a unique and complex society stretching across the states of Jalisco and Nayarit from around 1000 BCE to 900 CE. The circular pyramids were the signature architectural style of this society, like the Olmec heads or the Greek Parthenon, and the city of Guachimontones was probably this society’s nucleus. The museum attests to a perspective intended to give the Teuchitlán tradition its due and not simply as an also-ran in the shadow of Mayan and Aztec societies, but its own thing: a circular, lakeside Mexican Atlantis.

The maquettes in the Interpretive Center show the illuminated buildings laid out like an architectural “cosmogram,” depicting the structure of time and place as well as the cycles of life and death. Accompanying your imagination of the elliptical and oscillating motion of the dancers, the voladores, and the ceremonial ball players, the architecture primes you for a guide’s off-the-cuff lecture on Nahua metaphysics. For example, the Nahua metaphysical concept of olin, meaning motion, includes undulation, oscillation, heartbeats, respiring chests, the rotation of the sun, and cyclical transformation. Olin pictorial figures are often petaled flower figures: a round center with radiating shapes, not unlike the architectural program of the site. Malinalli, or “grass to make twine,” is associated with coiling, spinning, twisting, dancing, ritual sacrifice, blowing wind, and blowing life into things. Malinalli is the force that twists, splices, and spins the chaotic mass of cotton into thread.

In late 20th-century Mexico, pyramids became part of another circle: the tourist circuit.

Forty years ago, Antonio Enriquez Savignac, a Mexican politician serving as head of Infratur (Fund for the Promotion of Tourism Infrastructure), used a mainframe computer to select Cancún as an ideal site for global tourism. The number of beaches, distance from major airports, and the population density of humans as well as snakes and ants were all factors that helped to determine the tiny fishing village’s destiny to become a resort leviathan. The late Mayan pyramids of Tulum on the coast near Cancún, along with the grander Chichén Itzá plus the cenote swimming holes, help to comprise a branded territory, a circular route that tells a story and offers a variety of experiences.

Flying to Mexico City? Same idea. Visit the pyramids of Teotihuacán, relax on a boat in Xochimilco, visit Frida Kahlo’s Casa Azul, then spend a night in colonial Taxco.

The Guachimontones pyramids, like many pyramids, aren’t fake; every pile of rocks gets dressed in an exotic way or partially reconstructed for out-of-town guests. The pyramids at Monte Albán in Oaxaca sport a lush green lawn as do the ruins of Tikal in Guatemala, which boast cameo appearances in Star Wars Episode IV: A New Hope. But when you’re posing next to Los Guachimontones, taking mini drone videos, these pyramids make your Instagram feed look as if you had visited an ancient, terraced rice farm in Southeast Asia. Short but striking, the circular layers give them an affordance of telescopy, as if they are temporarily retracted but could grow like a zoom lens.

They also help to complete a physical narrative called the Ruta del Tequila. It’s literally a designated circular tourist route around the Tequila volcano where you see agave farms and distilleries and sleep in old haciendas with new hot tubs. Keep the story of tequila’s evolution from the indigenous, sweet, milky pulque fresh in your mind as you easily scale the round pyramids, admire the landscape, learn a few steps of a ceremonial circle dance from a guide with a lanyard around his or her neck, stare into the salted rim of your glass while contemplating the cyclical nature of life and the cosmos, and hear the voice of the Guachimontones whisper, “Yes, we are the only circular pyramids in the world.” 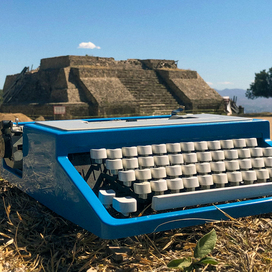