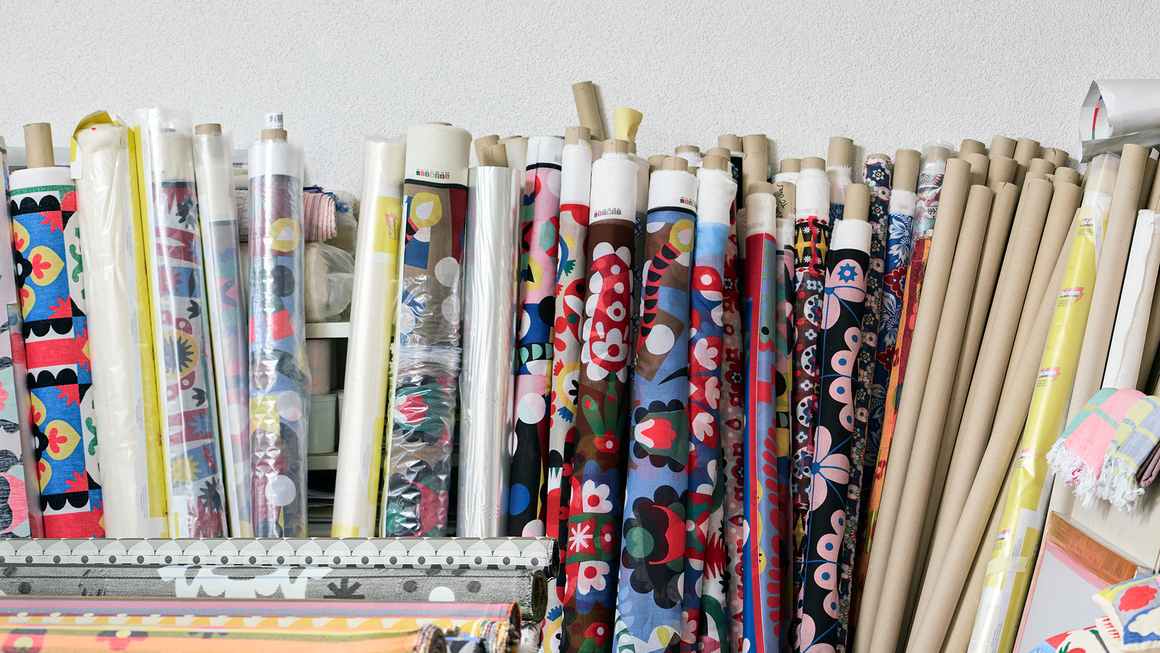 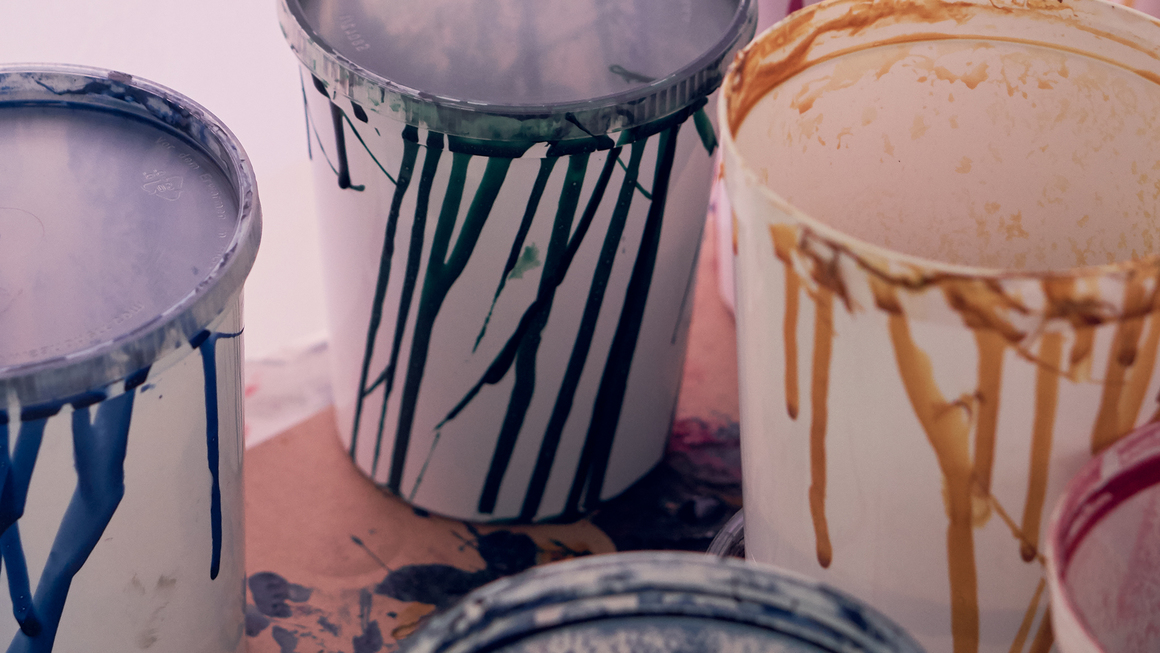 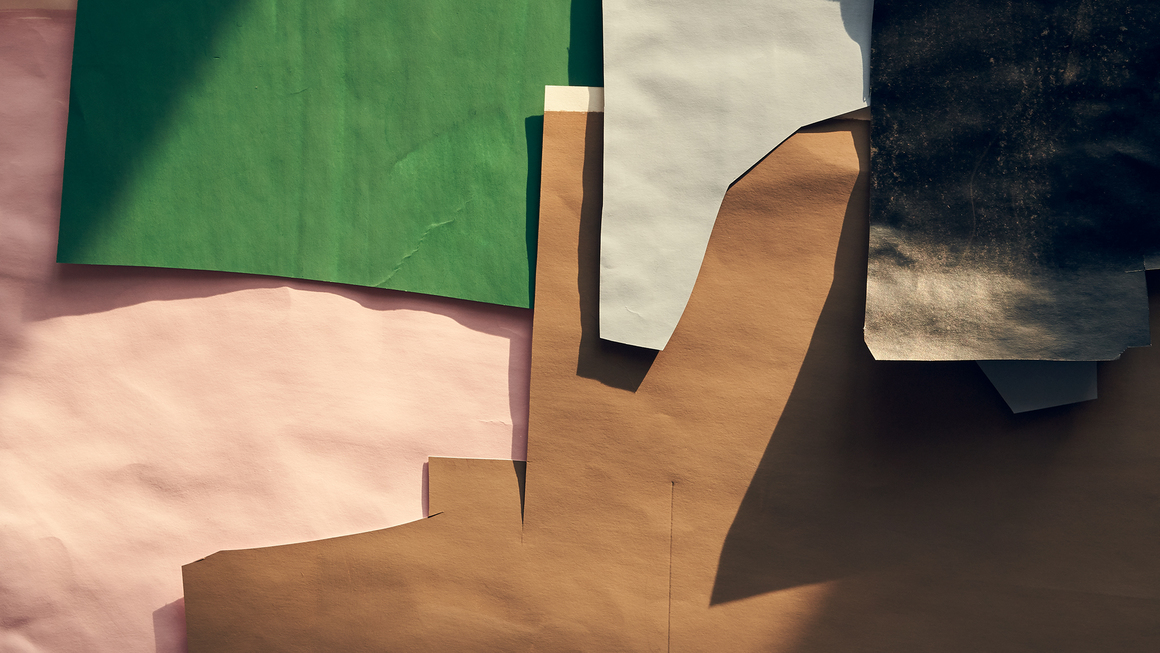 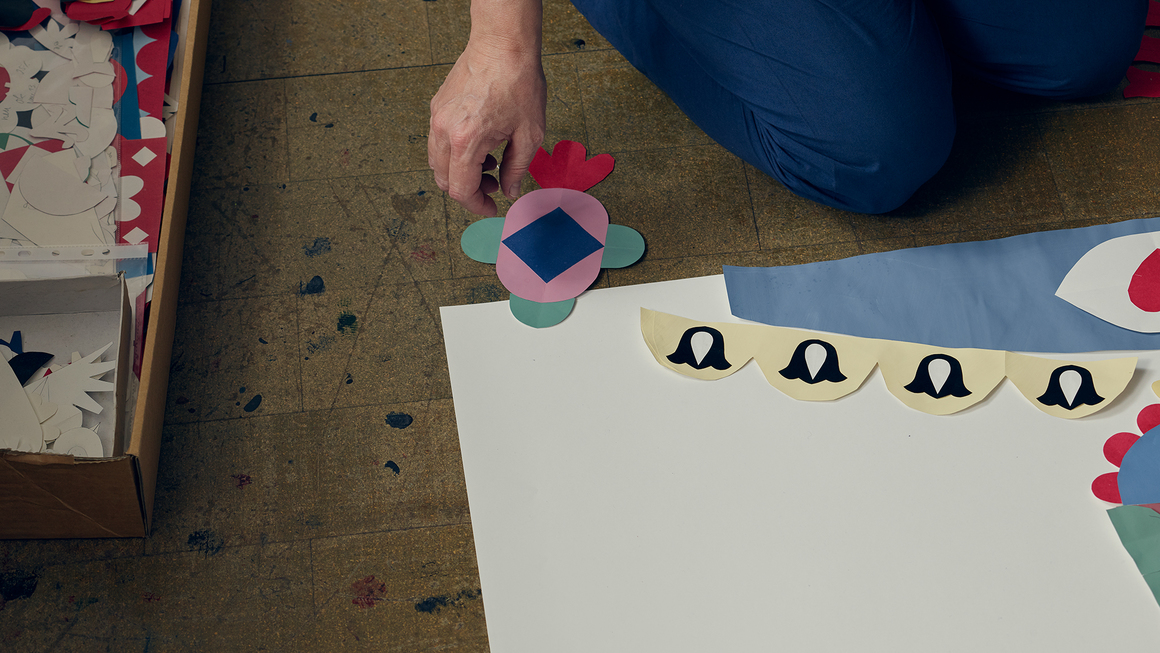 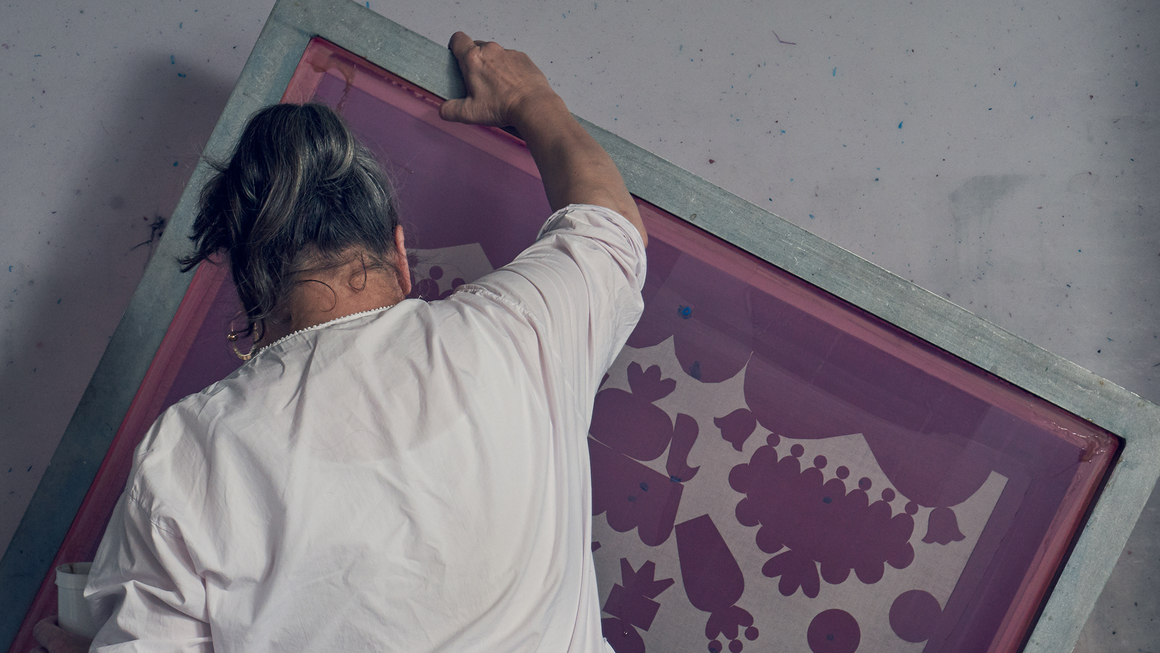 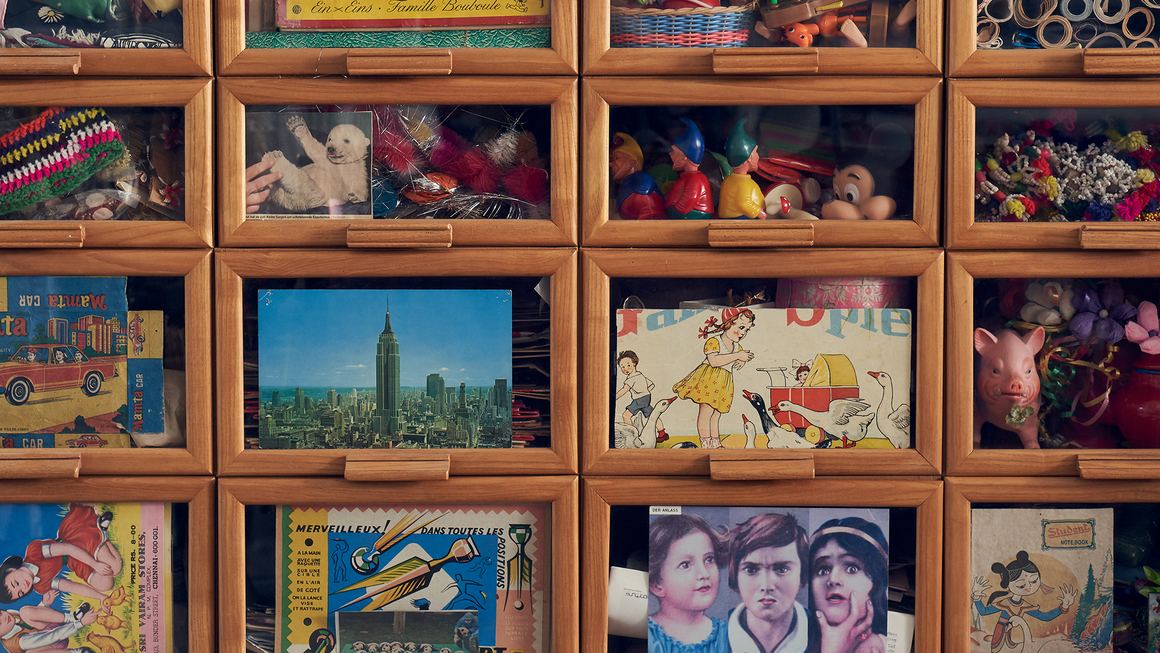 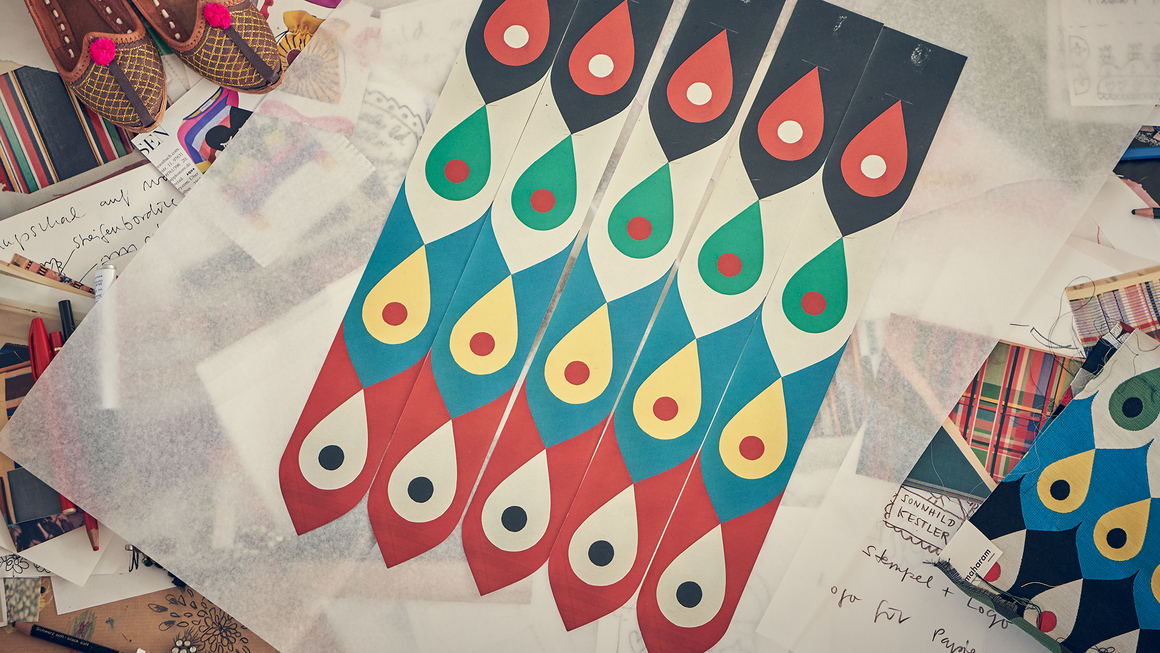 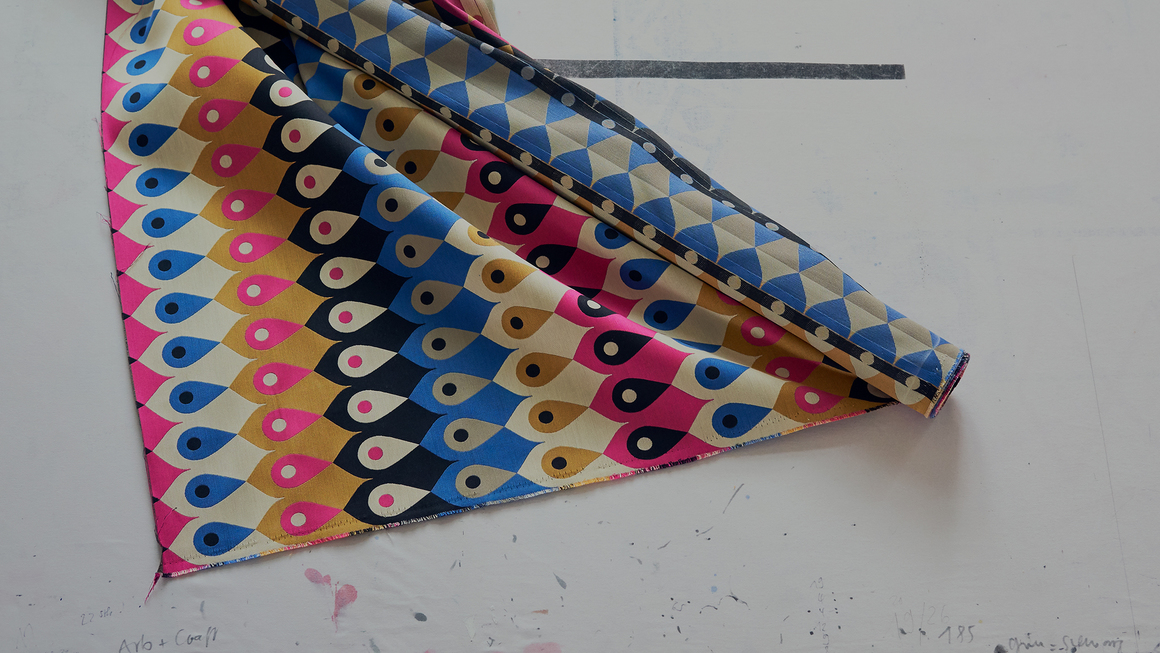 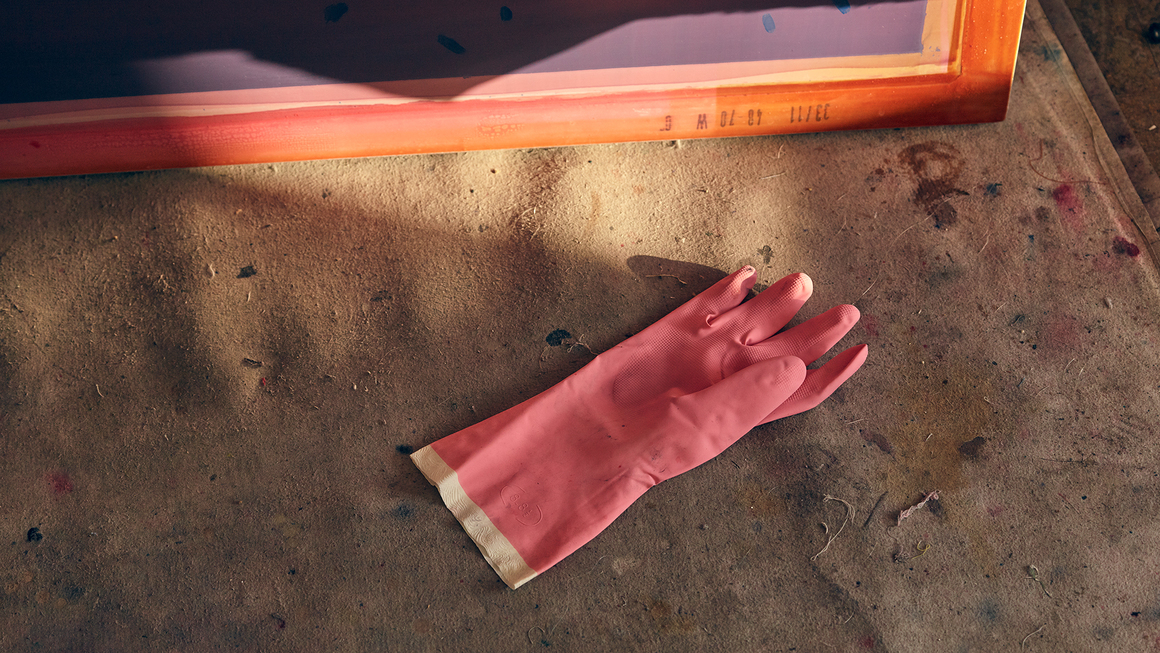 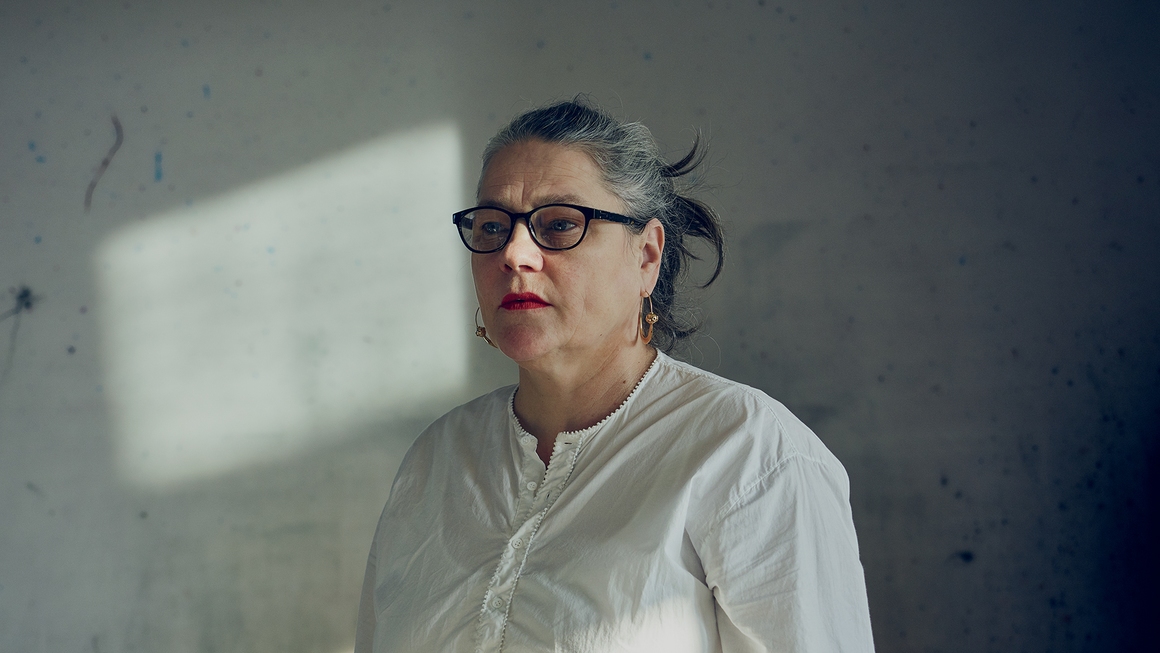 Sonnhild Kestler is a textile designer who lives and works in Zürich, Switzerland. Along with textiles for interiors, Kestler has designed home and fashion accessories under her own label, S.K. Hand-Druck since 1996. Known for her ability to synthesize a wide array of traditional and folkloric references into a distinct pattern language, her work is distinguished by dynamic graphic compositions that are developed by hand and unified by vibrant color. In light of a newly expanded collaboration with the Maharam Design Studio, Kestler shares the origins of her unique pattern language and its recent culmination in a collection of textiles and rugs.

How did you begin working with textiles?

Sonnhild Kestler: That goes way back! When I was around fourteen years old, I started to really enjoy working with craft materials and discovering new techniques, like sewing and embroidery. I was simply attracted to textiles from early on.

Was that interest possibly sparked by your parents? Were they involved in textiles at all?

SK: No, not at all. The funny thing is that when I was a child, I thought handicraft was horrible! I was always the slowest in class. I spent weeks knitting a single sock, and even then the teachers had to help me finish. It’s so strange because initially, textiles weren’t my thing at all, but then we got a new teacher who sparked my interest somehow.

There was also a French women’s magazine around at that time called One Hundred Ideas. It was about handicraft and simple objects that you could make yourself, such as dresses or furniture. I subscribed to the magazine and it arrived every month. It was full of beautiful photographs and colors, and whenever a new issue arrived I devoured it. It was like a new world opened up to me. I still have memories from that today. Really intense feelings. I could get lost in those memories for hours or days on end.

Did this experience somehow spark your interest in fashion?

SK: No, I was first interested in textiles, and then fashion came later. I was captivated by patterns and the materiality of textiles from a young age, but at the time, so much emphasis was placed on what could translate to an occupation. For a long time, I thought I would be a jewlery designer, but then I took a course in Zürich and learned a range of things like drawing, clay, and so on. That was an amazing experience because I had to travel a long way from my home in the countryside into the city. While I was there, it became clear that I could really get things going in Zürich.

SK: After that course, I took an admissions exam and was admitted to a four-year textile program at Zürich University of the Arts. Things went quite smoothly from there, so after that I never really questioned what I should or wanted to do—textiles have always held the most meaning for me. A printed fabric doesn’t have the gravitas of an artwork, it thrives on a certain lightness. Art, on the contrary, forces you to say what you think in a serious way that I find to be too much. I like cloth to fall to pieces—for it to be used and to be lived with. I like that textiles have a limited shelf life. When I’m in India, for example, watching people weaving, it just impresses me so much. It just gives me this energy. That was surely part of the reason why I wanted to do this from the start—I enjoy the process.

What sparked your interest in folkloric shapes, particularly those from India and the Middle East?

SK: That’s precisely what I get asked in my store: Is that from South America? Is that from the East, from Russia? Middle Eastern folkart is deeply ingrained in me, along with other motifs I've collected over the course of my life. I grew to love textiles in the same way, by discovery, and naturally collected books about them as well as odd things from secondhand shops. Random objects have always been of interest to me. Not valuable things necessarily, but rather weird and funny things. For instance, throughout my travels I have always adored houses. Houses are quite close to the people living in them and contain so much more human soul or feeling as opposed to something that’s been overly designed. The idea that objects are somehow charged with feeling is what I think is important here. I witness this sort of thing a lot, when people in my store react to different products—it’s amazing, it’s different. And that’s certainly the result of the soul or feeling in each object.

That brings up another question—textiles are industrially manufactured products now, being produced in large quantities. Artists are often only indirectly involved in the production process. Their designs need to be entrusted to others. Was there a specific challenge you faced during your collaboration with Maharam?

SK: Yes, there was. In creating the third design, the “Big Flower,” it became challenging to devise a repeat—not just a half repeat but a whole vertical repeat. Towards the top of the design we had a bit more leeway, but against the width space was limited. We needed to make sure that the design’s relatively large shapes would turn out elegant, not rough. I needed a designer’s help at that point. I started a sketch and sent it to Maharam’s design team, and they helped me with the approach. That’s where I learned a lot, and it turned out wonderfully. It was an amazing experience to be able to do that. I now want to work more on repeating patterns. That’s something I’ve hardly ever done before, which is great because I couldn’t just do the same thing over and over. My process is very much about finding a new feeling, a new expression, something exciting to work with. Travel in particular is very good for that because it really disconnects me from here.

When did you first travel to India?

SK: I first went in 2003 with my friend Matthias Georg, a fashion designer with whom I shared my first store. We weren’t able to go for a long time because we had little money. But when we eventually closed our store, the opportunity to travel arose. Thinking about that now, it was a good thing that the store closed. Even though Matthias is an amazing and inspiring person, it was also liberating to go my own way and make my own decisions about my work—to pursue what I was really interested in and develop my own label. Before we went to India, I looked through guidebooks to get a sense of what might be interesting to see, but then thought, Well, you just have to go there first! (laughs) That first trip we took was great, but it wasn’t textile-focused. It was more about just seeing this world in general.

Would you say that travel is influencing your work more these days?

SK: Yes, quite a bit. Aside from India, I recently went to Istanbul twice. My travels have been very much about simply experiencing these countries because that is also where a lot of ancient culture is more preserved, and still so much is vanishing. The bazaars, for instance, the whole culture around them—that’s also a big interest of mine, along with places like Damascus and Aleppo. My interest in textiles has also grown because of these travels. I’m now interested in terry cloth design, or woven cotton and wool scarves. All that came with the trips to India. As soon as you have possibilities, you start to think about what you can do with them. And that’s how the exchange needs to be. It’s always one thing follows another.

Last January, I encountered traders along part of the Silk Road. These were very rich traders who had huge—well, you can’t say palaces—but just amazing houses that had been painted and decorated. Because they lived in cities part-time, their houses were often empty. When you entered into the rooms, everything seemed so enchanted. I had the same feeling when I discovered One Hundred Ideas. I’m basically always searching for something that gives me the feeling of lost time. I seek both the fantastical and the unexpected, and my travels offer a lot of those things. (laughs)

SK: They do. It is really important for me that I am not just copying these cultures but rather distilling them into my own language—that my work continues to revolve around what are, for me, universal questions that I’ve been rethinking for years. I’m not a religious person, and the questions of where we are from, what we are doing here and where we are going—I just don’t know the answers to. I am happy to know my interests, and I’ll keep pursuing them until the end of my path. You are always on a path and everything has its time and certain things will pass. That’s exciting because there are always new things that emerge and to discover along the way. Like now with Maharam—that’s a new path, too. It’s really interesting to see a collaboration like this pan out, and also wonderful to know that Maharam is also on its own path, and that eventually we met and something new came out of that. That for me is simply great fortune. You can’t plan that.

You just take it as it comes.

SK: Yes. To me, the only thing that matters is the opportunity to adopt the skills and craft of a place, and then work my own language into it. I’ve been interested in block printing for such a long time, for example, and went to Gujarat, India to see it there. It was amazing to witness, but afterwards I didn’t know what I should do with the technique. Eventually, I thought to design shapes by myself, and then simply implement them with the block printing technique I picked up there. It’s a bit difficult though, because the process is quite labor intensive. At that point, you start to ask yourself what it’s worth—where do I want to go with this? Questions like that always arise, but you just learn to move onward, and your path continues through. 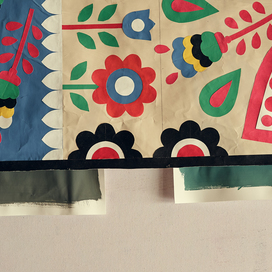 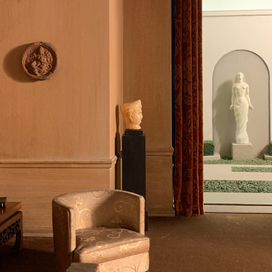 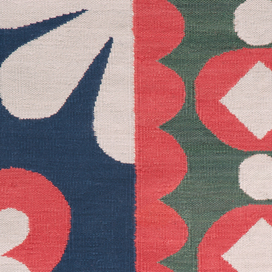 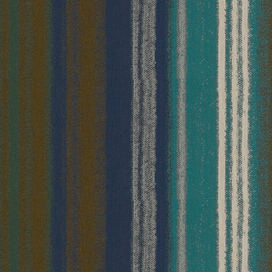 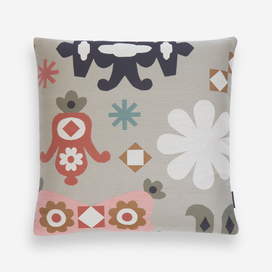