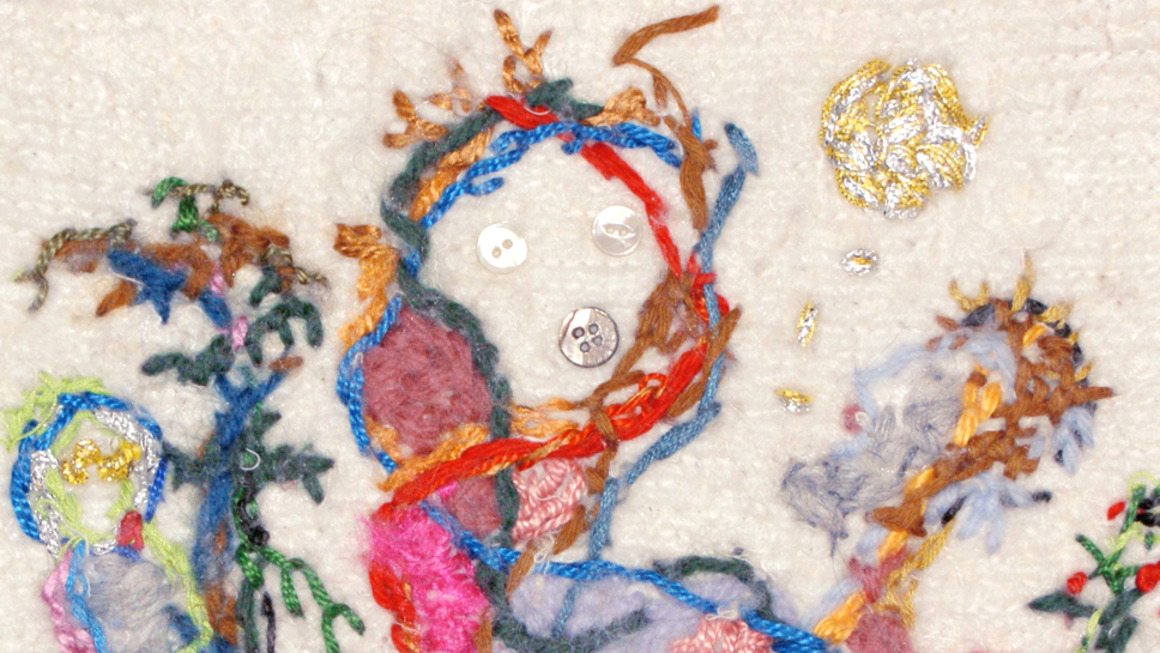 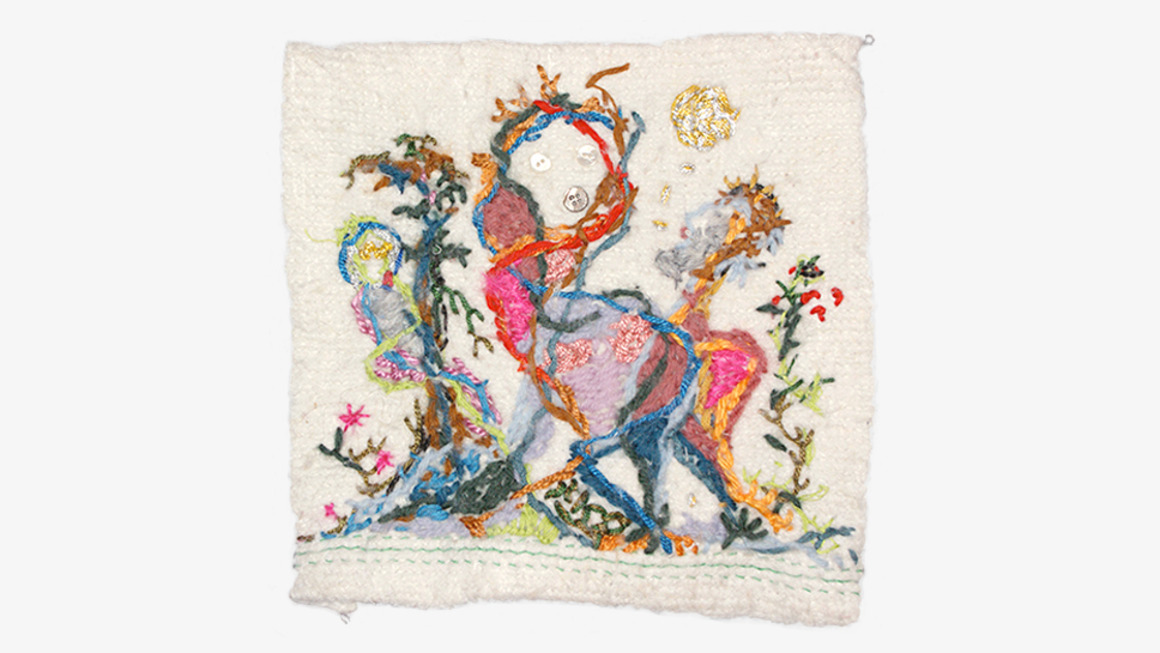 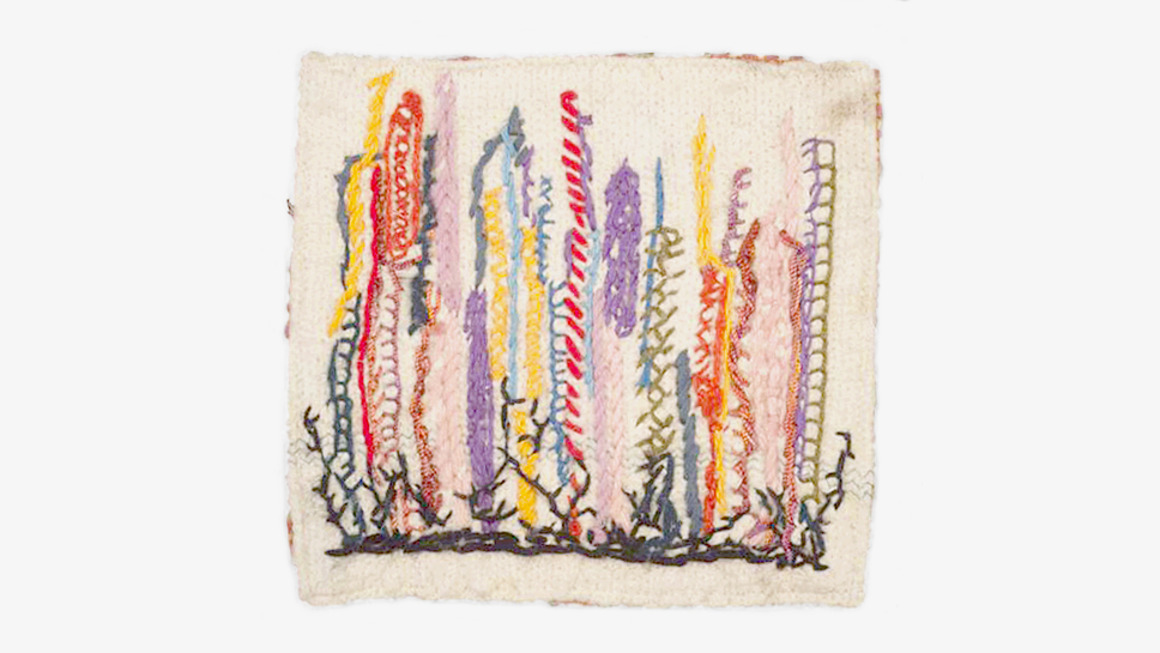 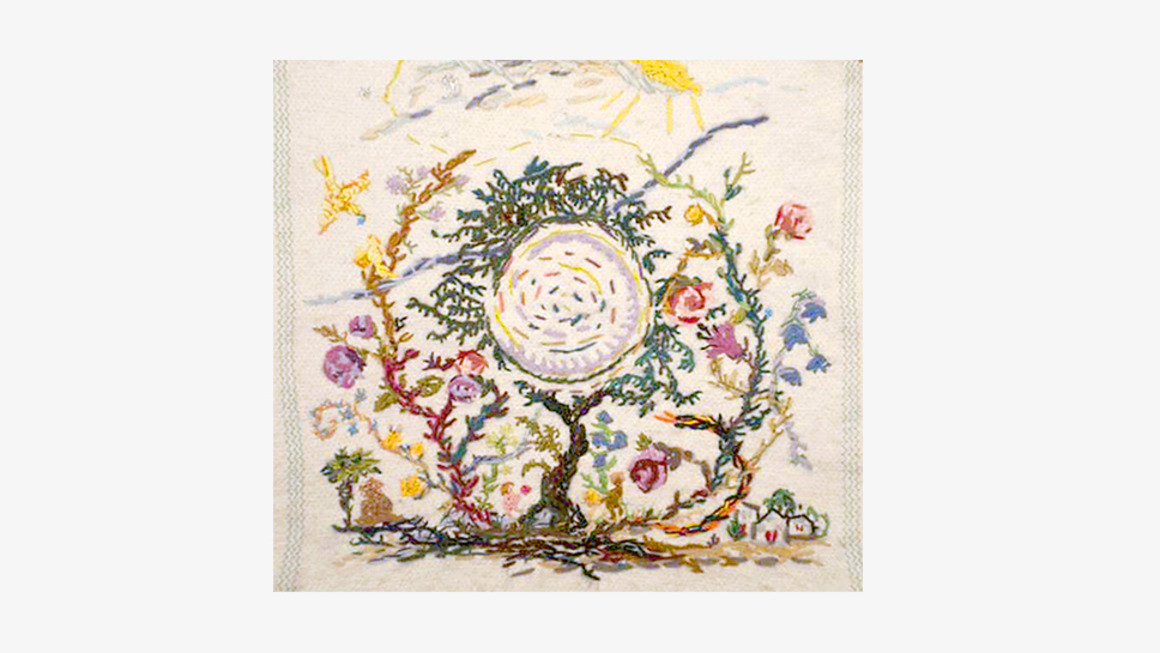 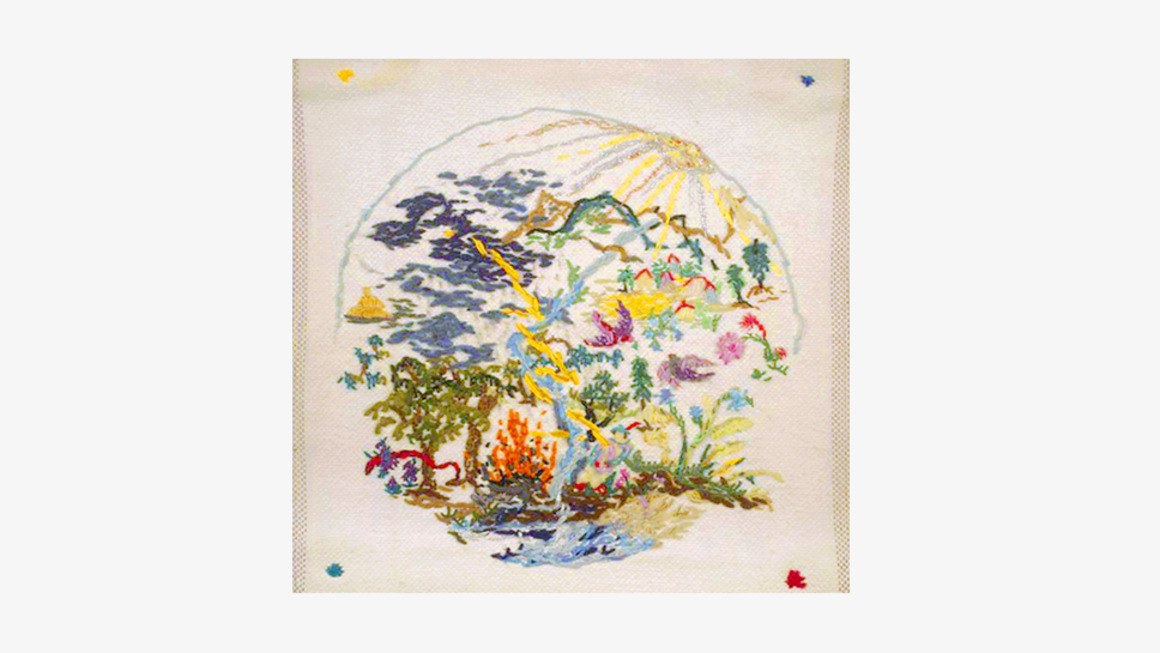 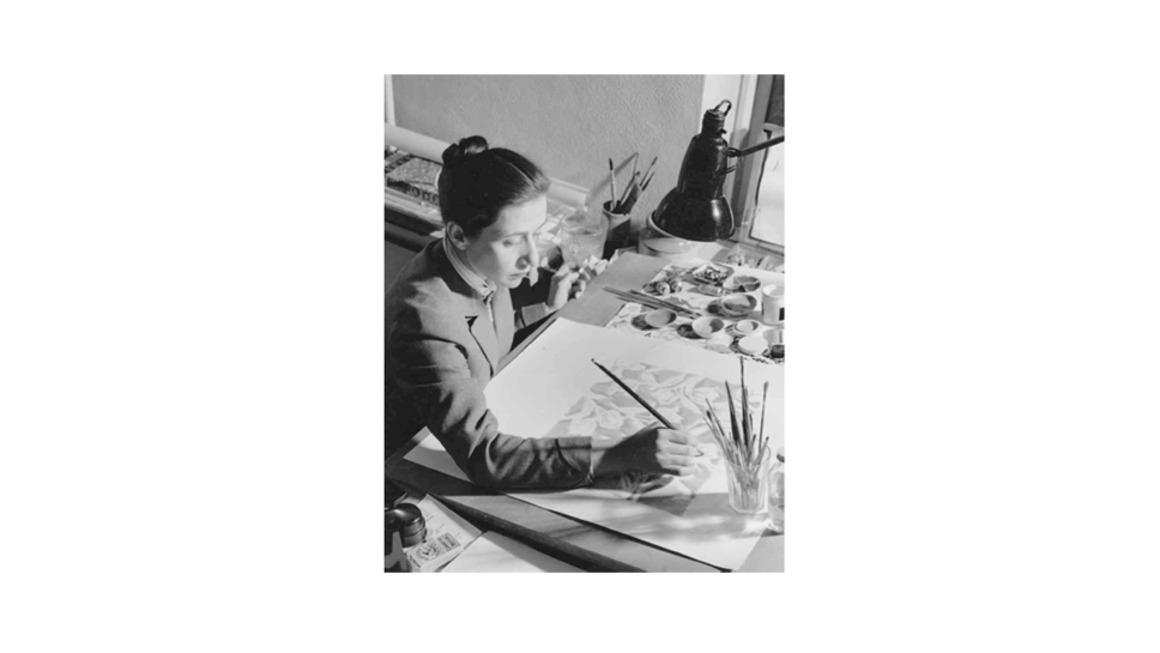 A few years ago my neighbourhood health centre, the place where I meet my doctor, was given a makeover so comprehensive that it was in the running for the U.K.’s most significant architecture prize. My first visit to the new premises was heartening: light flooded in, colours were bright, and representatives of the diverse local community waited together calmly. As I crossed the antechamber to my doctor’s surgery, my attention was drawn to some framed embroideries on the walls. A collection of fabric patches all roughly the size of a hardback book cover, they were sewn with a striking, stitcherly abandon. They obviously belonged to the therapeutic universe, yet they were at odds with the primary colours and bold shapes of their “healthy” surroundings.

After my consultation, I spent more time with the works and made an inventory of their motifs. Containing trees, plants, and creatures of more and less fantastical kinds, often all of them caught in some kind of inexplicable vortex, they invoke an imaginary landscape in which spirituality coexists with rage. Each is a picture of a hellish heaven or a heavenly hell. The wild stitches and the apparently spontaneous inclusion of elements such as buttons or tangles are balanced by unmistakable formal confidence. Their combination of chaos and skill is highly charismatic. I noted down the name of the artist—Elisabeth Tomalin—and went home to see what Google could tell me.

A quick search revealed that, at the time (2009), Elisabeth was ninety-seven years old and living in north London. Born Elisabeth Wallach in Dresden in 1912, she had fled Germany in 1936 and spent most of the rest of her life in England. I also found out that she was the grandmother of my friend the designer Thomas Heatherwick. Thomas often cites her influence and has described her as his “design hero.” In 1934, Elisabeth was studying at the Reimann-Schule in Berlin when it was forced to close because a large proportion of its participants, including Elisabeth, were Jewish. Now much less well known than its counterpart the Bauhaus, the Reimann-Schule was in fact a great deal larger, enrolling about one thousand students a year to the Bauhaus’s two hundred. The Reimann had a high proportion of women students and concentrated on typically feminine domains such as shop-window display, fashion presentation, costume design, and illustration. But, if these now seem like timid, commercial specialisms, it is important to remember that many of the students, Elisabeth among them, were actively engaged with psychoanalytic theory and saw no contradiction in weaving Jungian themes into work that was destined for a shop window or a fashion plate.

During the war, Elisabeth worked at the Ministry of Information in London and afterward, in 1949, she was instrumental in setting up the fabric design studio for the British retail chain Marks and Spencer. Elisabeth took a fundamental view of what it took to build a studio, and Thomas still uses a desk that she designed for her team. Leaving M&S at the end of the 1950s, Elisabeth spent the next decade as a freelancer creating furnishing fabrics and decorative papers, but at the end of the 1960s, her career took a dramatic turn. In what could be seen as a personal echo of the political and cultural uprisings of the time, Elisabeth gave up her long career in commercial design to retrain as an art therapist. It is as if she, like the rest of the world, decided to act on the epiphany that the increased material well-being of the 1950s and ’60s could not erase or make good the lived horror of earlier decades.

Elisabeth’s art therapy, in particular in the field of sandplay, was pioneering. From the mid-1970s to early 2000s, she travelled regularly to Germany, first working in a psychiatric hospital and later establishing academic qualifications for therapists. At age ninety-five, she stopped commuting abroad but continued to see patients at the Royal London Homeopathic Hospital. She was just at the end of a seventy-year-long working life when I first encountered her embroideries. To me, these pieces communicate a sense of frustration at still having much to do, but with limited time and means curtailed by old age. Elisabeth’s stitches burst from the fabric with an urgency that I could not ignore.

Elisabeth died a few months short of her hundredth birthday. She was among the last of a generation of Jewish émigrés, many of them women, who revolutionised attitudes towards design in Britain. She told friends that, had things been different, she would rather have spent her whole life in Dresden. It was appalling that she was forced to leave Germany, but directly through her work and indirectly through her influence on Thomas, we British benefitted hugely from her presence. 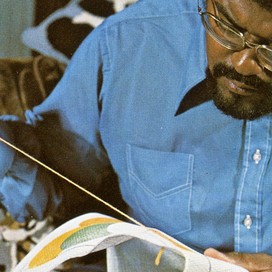