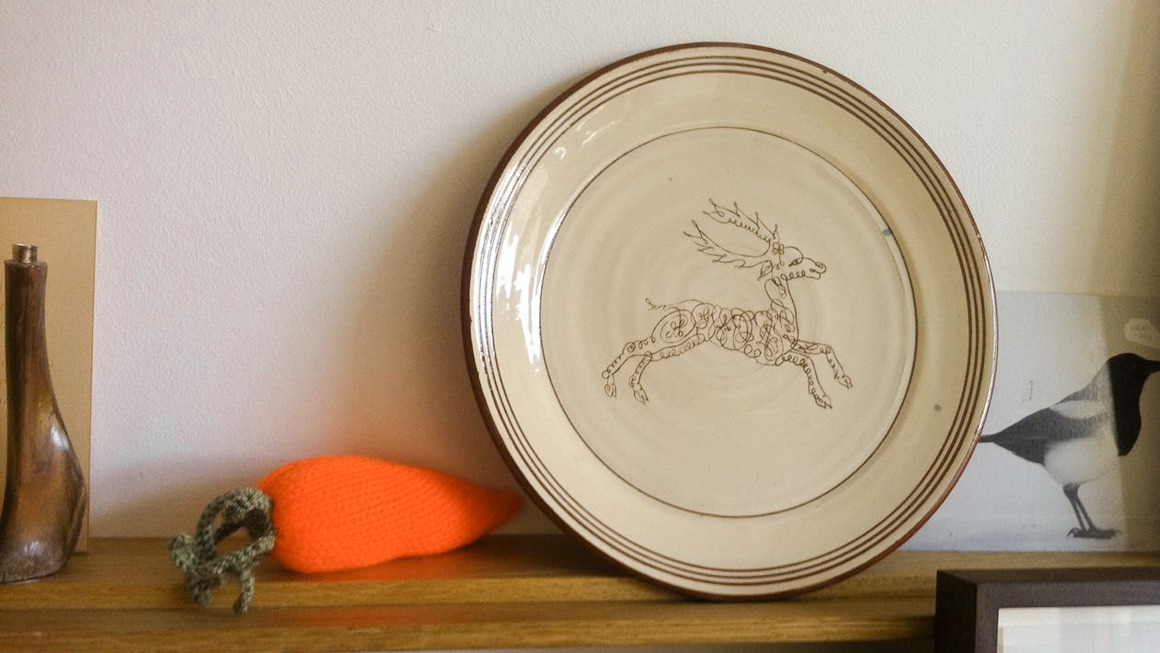 William Kroll is best known as a small-batch jeans maker. After working for the Japanese brand Evisu, he started his own label, Tender Co., in 2009. He is celebrated among denim fetishists for his use of natural dyes such as purple logwood and woad as well as his elegantly honest approach to construction. Four years on, Kroll’s core business remains tiny but is going strong; yet, when asked about products that represent his current activity, rather than showing me a pair of trousers, he went to his stock (which he keeps at home) and ferreted out a hand-thrown clay plate.

Around eleven inches in diameter, it is made of red clay slipped with white. At its centre is an illustration of a stag created using a technique called sgraffito, which involves scratching through the upper layer of white clay to the dark red clay beneath—Roman frescos were made this way. The drawing consists of a single yet incredibly elaborate line, with the stag’s body built of gestures suggestive of ampersands and its antlers loop edged. The plate is one of a set of three, all slightly different in size and each illustrated in the same style, the second showing a robin in flight and the third the head of a satyr with modest crescent-moon horns.

All three emblems are examples of early 18th-century German engraving taken from Jan Tschichold’s marvelous book Schatzkammer der Schreibkunst. First published in Switzerland in 1945, with an English version produced in 1966 under the title Treasury of Alphabets and Lettering, this volume contains page after page of exquisite examples of decorative lettering. Kroll’s copy is a rare German-language original that he inherited along with several other enviable books from the library of his grandfather, the art director and editor Alex Kroll. Kroll enjoyed an unusually close relationship with his grandfather. As a child he would travel from his family home in Oxford to Alex Kroll’s house on the Fulham Road to spend time together visiting art galleries and absorbing the older man’s milieu. Later, when he was studying menswear at Central Saint Martins College of Art and Design, Kroll lived in the basement of that same house. Alex Kroll was a German émigré of Russian-Jewish origin and his circle included significant figures in London’s postwar cultural life, such as the gallerist Annely Juda and the graphic designer Germano Facetti. Kroll remembers that during the period they lived together, his grandfather took a newspaper every day but changed his subscription regularly. Looking at the world through the lens of the Guardian one day and that of the Telegraph the next, he never allowed his point of view to ossify.

While the illustration on the stag plate is the legacy of Alex Kroll, the object itself owes its existence to another of Kroll’s grandparents, his maternal grandmother. During an afternoon at her house, Kroll noticed some very appealing ceramics that he discovered were the product of a fellow member of her local choir. A professor of English literature who prefers to remain anonymous, this amateur potter agreed to make some pieces according to Kroll’s designs. It was a process of trial and error—Kroll’s first suggestions were totally unsuited to the potter’s skills—but eventually they arrived at the plates. Kroll learned a huge amount about clay in the process and the potter had the opportunity to demonstrate his extraordinary talent for freehand illustration.

Kroll’s fascination for jeans lies in the transparency of their construction—their selvedge seams and patch pockets—and it is related interests that have taken him into territories beyond denim. Sold through his website Trestle Shop, as well as ceramics, Kroll’s non-clothing range includes a pair of cast brass dice, a cow-horn comb, and an unusually real bear-like sheepskin teddy bear. As with the plates, each of these things was made by a craftsman who, with Kroll’s encouragement, took well-honed skills into new territories. In some cases this has caused pain—the amateur soft-toy maker sewing the fleece bears ended up with very sore fingers as such toys are usually made with fabrics with more give. But even suffering has led to invention. Among the next batch of Trestle Shop goods will be a toy in the form of a humpback whale made of relatively easy-to-sew cotton dyed with Mexican logwood. Although this whale has no direct connection with either of Kroll’s grandparents, it is in the same lineage as the plates. The shape was the suggestion of Kroll’s wife, Deborah, and, in part, it came from tailoring demands to suit available skills. It is the product of family wisdom, curiosity, and a willingness to adapt—all qualities that are at the heart of Kroll’s project.