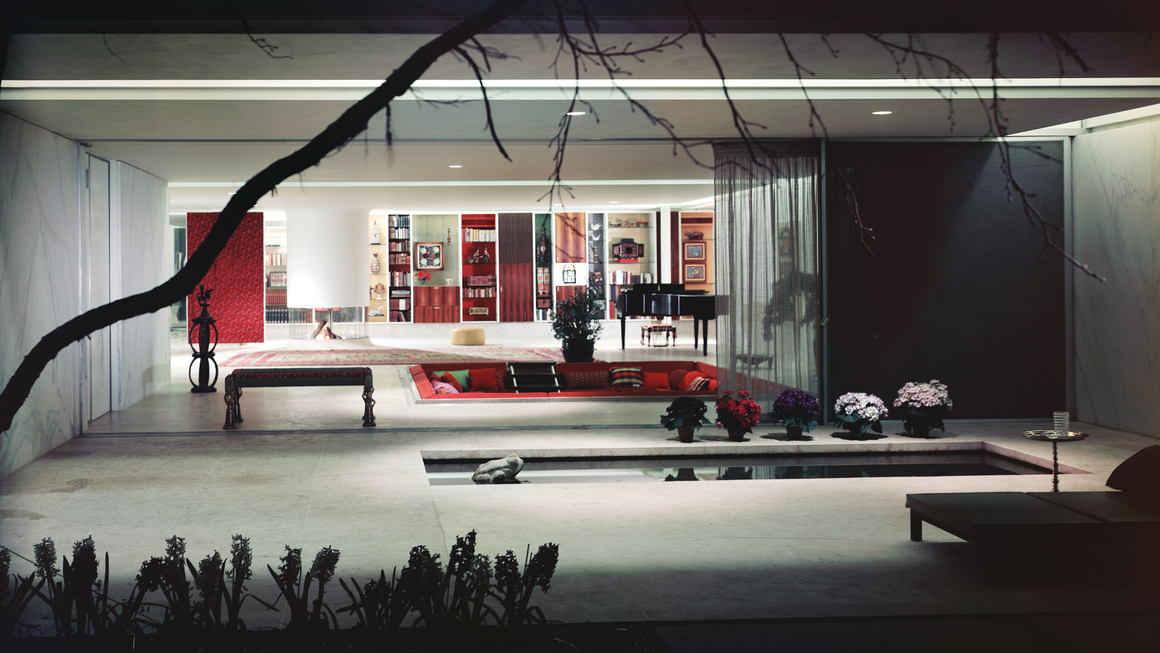 Eero Saarinen had been experimenting with the idea of conversation pits for a few years when he received a commission from industrialist J. Irwin Miller to design a family home in Columbus, Indiana, in 1953. Saarinen was interested in the potential for sunken living rooms to create productive divisions in open-space floor plans—informal, intimate spaces within large expanses, which would solve “the problem of furniture, with its inevitable ‘slum of legs’”—and the Miller House provided an opportunity to test his solution.

In 1959, the house appeared in a twenty-page feature in House & Garden, where the conversation pit was described as a “brilliantly cushioned well”—the back cushions made thicker than standard to help people get in and out more easily, the steps angled so sitters couldn’t see up women’s skirts, and the underside of the piano painted pillar-box red—an intimate, low-profile setting where guests could lounge and look at nothing but each other. Creating a dedicated space for conversation might have been less unusual at the time than it would be now, particularly considering current suspicion around technology entering the home, but it was undeniably decadent, and challenged ideas around social decorum and propriety. In a 1963 edition of TIME, an argument against conversation pits, and their many dangers, was published:

At cocktail parties, late-staying guests tended to fall in. Those in the pit found themselves bombarded with bits of hors d’oeuvres from up above, looked out on a field of trouser cuffs, ankles and shoes. Ladies shied away from the edges, fearing up-skirt exposure. Bars or fencing of sorts had to be constructed to keep dogs and children from daily concussions.

In an April 1964 edition of the New York Times Magazine, writer Sylvia Wright described them as an “anti-chair,” a “transitional device backed by many architects who lack the courage openly to advocate lying down.” She argued that, rather than too radical, they could go further to accommodate modern America, a “uniquely non-chair sitting people,” who “only sit when engaged in activities of great importance, those which identify them as men of position and substance” and prefer lying down or standing. “There seems to this writer, however, to be overwhelming evidence that [. . .] the United States is gradually ceasing to be a chair-sitting nation,” she writes. It “is becoming instead a nation where one of the most characteristic positions is a state of collapse.”

Conversation pits appeared at a time of broader cultural shifts and upheaval, when “the vogue for suntans brought the freedom to lie down in places our parents wouldn’t have thought of,” and with so much up in the air, rolling down or climbing over seats seemed just as plausible as any other future. They featured in various homes, in projects by Saarinen, Girard, Goff, and Paul Rudolph, both domestic and in the exciting new realm of the airport—such as Saarinen’s TWA Flight Center at JFK. However, by 1960, Saarinen decried them as a cliché, fearing they were overdone and lamenting that he hadn’t come up with a better way to restructure the formal parlor. And so, for a while at least, they disappeared. Then, in the 1980s, conversation pits had a resurgence amid New York’s boom in Midtown lofts and bachelor pads. When architect Janusz Gottwald designed a loft interior for a wealthy consultant who “wanted to be freed from the limitations of ordinary seating,” Gottwald realized the versatility of the form—“you can even lie on it as if it were a grassy knoll.” 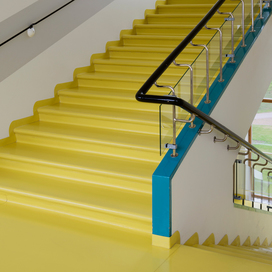 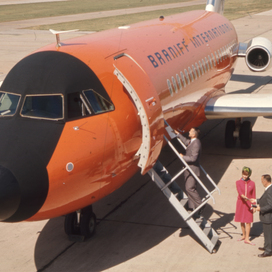 The End of the Plain Plane
x