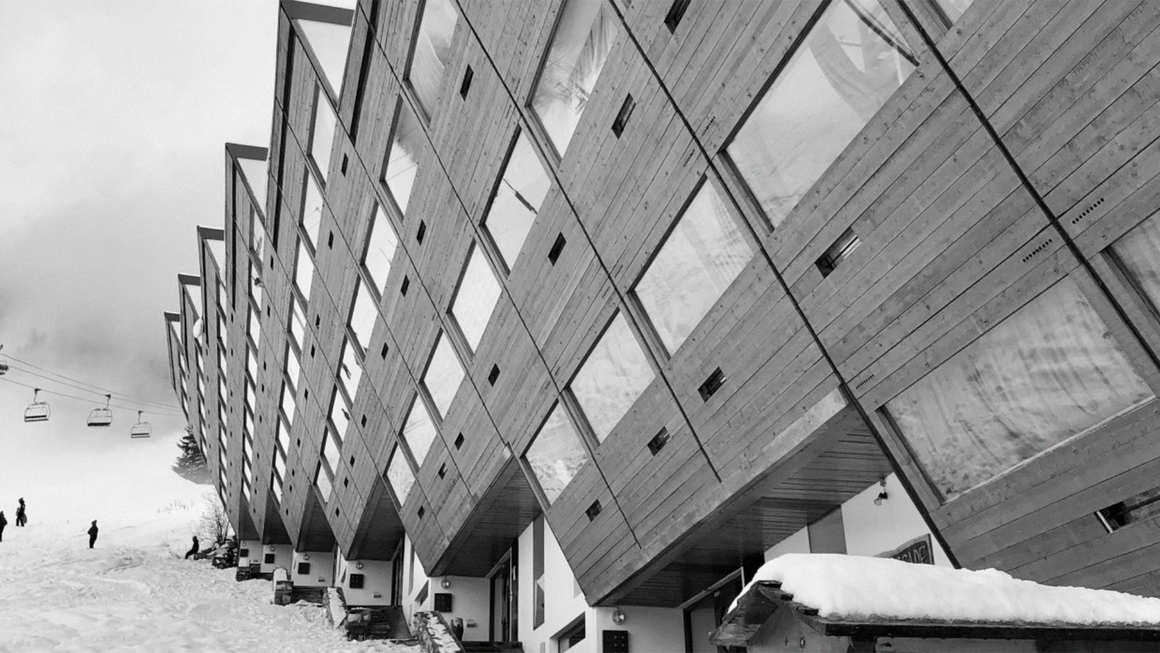 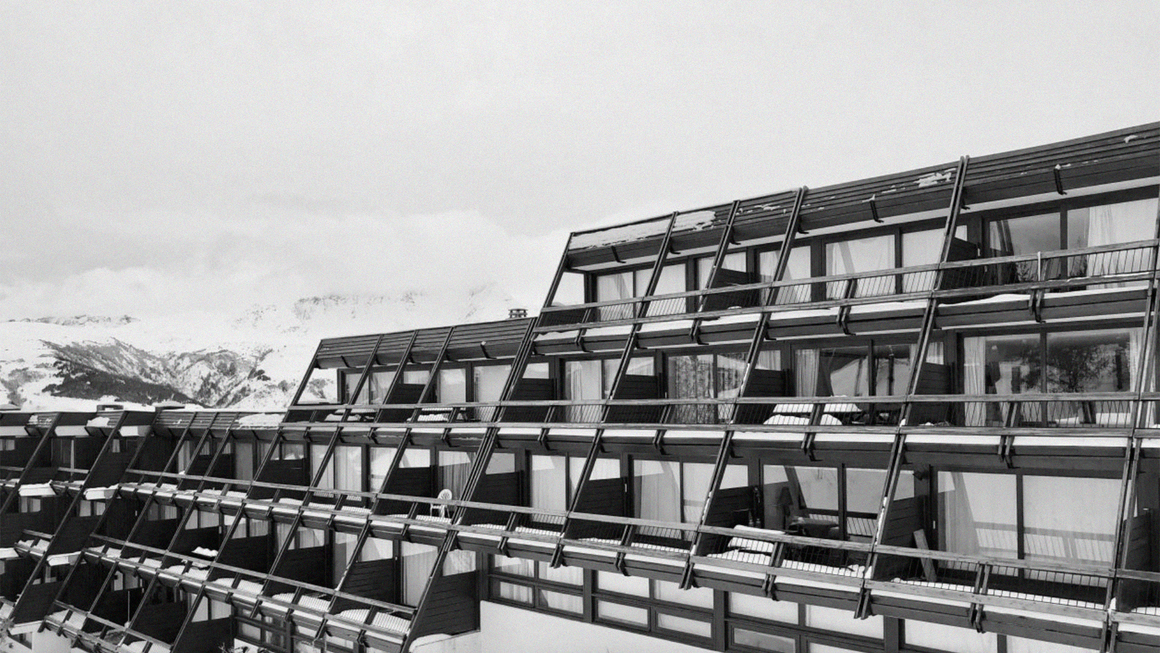 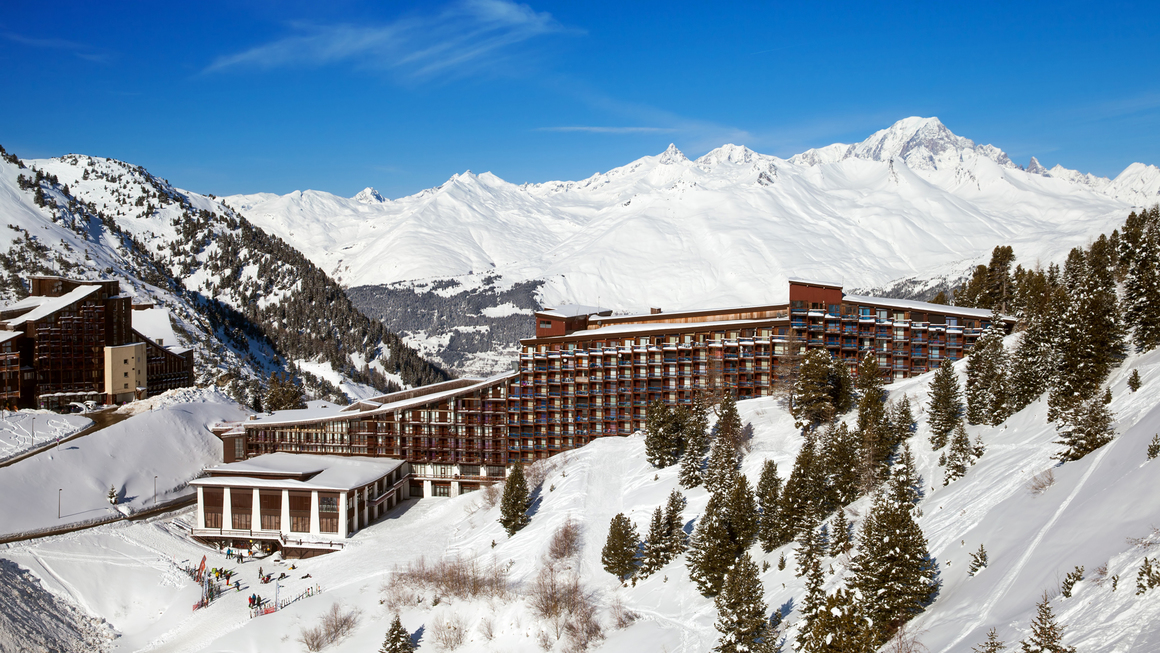 Les Arcs, a ski resort in the Savoie region of France, mostly disappears into its surroundings. Hotels and apartments lean into and cantilever out from the mountainside. Building levels are staggered and clusters of chalets follow the contours of the slopes. Le Versant Sud, the resort’s largest building, is almost invisible from above thanks to its snow-dappled flat roofs even though, when approached from below, the curtains drawn across its full-height windows form a bright color-block grid.

Charlotte Perriand, who designed the resort with the Atelier d’Architecture en Montagne between the late 1960s and early 1980s, grew up visiting her grandparents in the region. She was a keen sportswoman and off-piste skier who sought to make the “possibility of self-transcendence” she found on the slopes accessible to the masses. Paid leave in France had been legally extended by the postwar government, expanding leisure time to a broader section of the population. Les Arcs became the project where Perriand’s knowledge, experience, and beliefs could coalesce as a fully realized vision.

Les Arcs’ apartments, whose flat roofs double as terraces, are of equal size and receive equal amounts of sun. Hotel rooms are as compact as possible to maximize the available affordable accommodation. Inspired by her time in Japan in the early 1940s, Perriand designed interiors that are either open plan or separated by screens, with a flexible relationship between indoors and out. She established transitions rather than boundaries, and both literally and symbolically brought the kitchen into the living space, in turn bringing the housewife into the social life of the home.

Perriand celebrated new materials and technology, especially when it promised the potential for more equitable housing. Informed by shipbuilding techniques, she used mold-formed polyester to make easily reproducible kitchens and bathrooms for Les Arcs. A “plug-and-play” design meant they could be craned into place and quickly hooked up to water and electricity. Perriand designed high-quality, prefabricated housing and interior architecture, combining raw materials and advanced modular techniques, balancing pine with fiberglass. Holding these contrasts—of design, of material, of experience—was integral to her practice.

While Perriand despised looking back, seeing nostalgia as “a failure of nerve,” she was able to reflect on the consequences of modernism and its overlap with the true impact of industrialization: the chemical pollution of rivers, soil, and air; the decline of skilled labor due to mass production; and the increase in income and housing inequality. “We were utopian in the sense that we didn't see where our ideas would take us,” said Perriand. “We thought that society would change, that mankind was going to improve. That’s where we made our mistake.”

Perriand still saw hope in the potential for architecture to transform society, but on the condition that practitioners team up with other experts—sociologists, scientists, economists—to exchange ideas, embrace the challenges and opportunities of the day, and look to the future. In embracing new typologies, Perriand became a force of innovation who made her century sing. And in being open to critique, she was able to recognize the naivete that so often hinders visions of the future. Perhaps her legacy is in her ability to embrace her surroundings—the diverse landscapes, people, materials, and potential of the present moment. Perriand remained committed to moving forward. “In every important decision, there is one option that represents life, and that is what you must choose. Life is something in motion.”