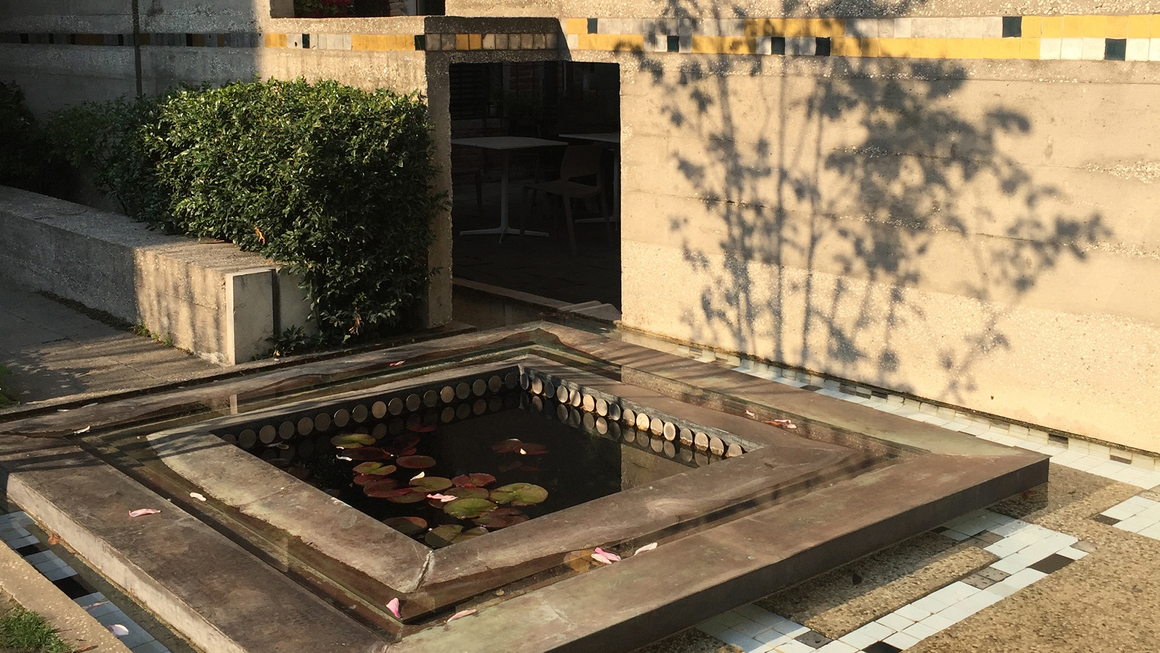 Leslie began calling the impending journey a “design pilgrimage.” During our week-long trip to the Olivetti Showroom, the Fondazione Querini Stampalia, Castelvecchio, and the Brion Cemetery, Leslie photographed each site and I took notes. The following story is the second of a series that together forms an homage to a design hero.

A short walk from the Olivetti Showroom in Venice, Italy, is the Fondazione Querini Stampalia, a sixteenth-century palazzo that houses the library and art collection of Count Giovanni Querini Stampalia.

In 1869 the count left the palazzo and all its assets to the public. However, upon changing the building from private to public use it became clear that the architecture needed rethinking.

In 1948, Scarpa was initially approached by the director of the foundation, Manlio Dazzi, to reinvent the palazzo for public use, but it wasn’t until 1961 that he began work on a bridge, entry, garden, and exhibition space.

In his work on the project the Venetian themes of renewal and decay are epitomized and made most obvious by the elements of water. The entry and first floor of the brick palazzo periodically flooded during high tides. Scarpa’s design would therefore need to accommodate these patterns of nature, as well as the historic structure and the requirements of a new museum.

Rather than trying to keep the water out, Scarpa treated it as an element capable of animating the space and incorporated it into his design. At the entrance, water circulates through a lattice metal gate and laps at a set of blocky marble steps that ascend from the canal, providing a landing for visitors disembarking from boats.

Part of what made Scarpa’s way of working unique was the relationships he made with his craftsmen. Rather than simply issuing instructions, he spent time with them, both in and out of their workshops.

Plasterer Eugenio di Luigi recalls that he and Scarpa visited contemporary art fairs, events, and galleries to glean inspiration for their work: “Carlo and I went once to a Mark Rothko exhibition and we both became enthusiastic about his work—the force of his colors, their vivacity and transparency.”

Aspects of Rothko’s work found their way into the interior of Querini Stampalia. An existing window was expanded to gain a grander entry to the museum while the floor became encrusted with a subdued palette of red, green, and pink marble tiles. A painting by Rothko was the inspiration for the ceiling finish and the red tiles embedded in the floor. The treatment of the upper and lower surfaces creates the effect of standing between two contemporary paintings.

In the garden, behind the entry and galleries, a continuous concrete wall delineates a water feature and frames details of the neighboring garden and architecture—a tree, a window, a door. Iridescent mosaic tiles animate the muted concrete surface and set forth a visual datum as visitors move through the landscaped terrain.

Exploring the Fondazione Querini Stampalia reminded us of the nuanced qualities of Scarpa’s work. Often indecipherable, his combination of stones, bricks, and concrete in Querini Stampalia creates a space that honors both past and present while his interventions are realized by timeworn techniques that transition between new and old.

Mariah Nielson is a London-based curator and writer. She is also the director of the J.B. Blunk Estate and co-founder of the design brand Permanent Collection.