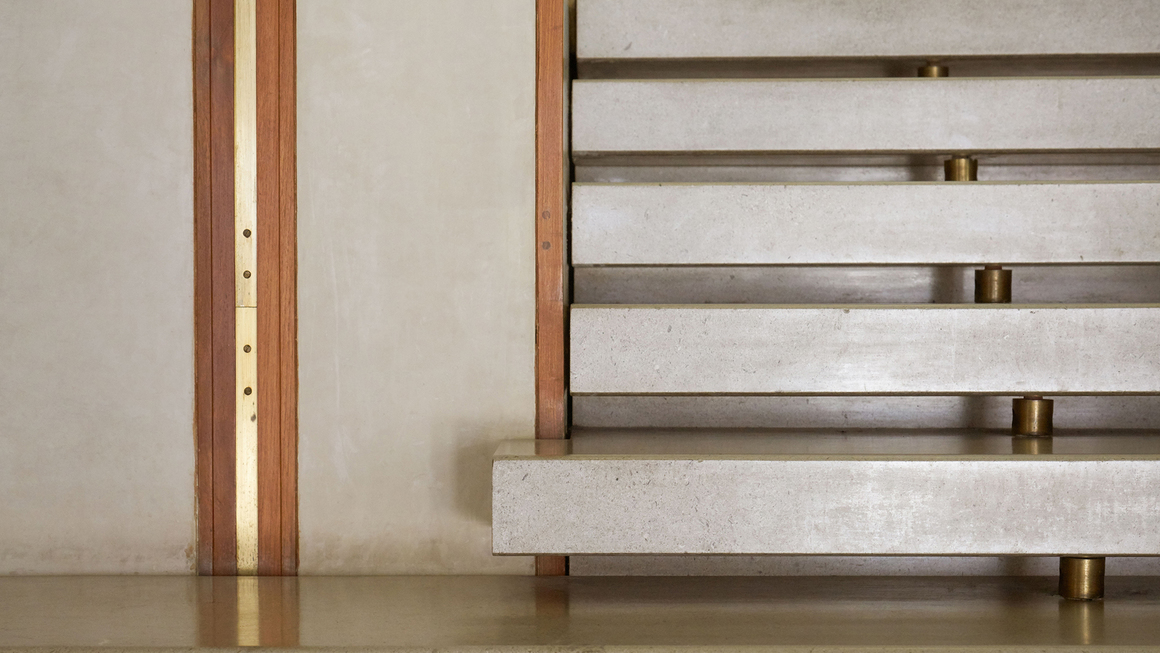 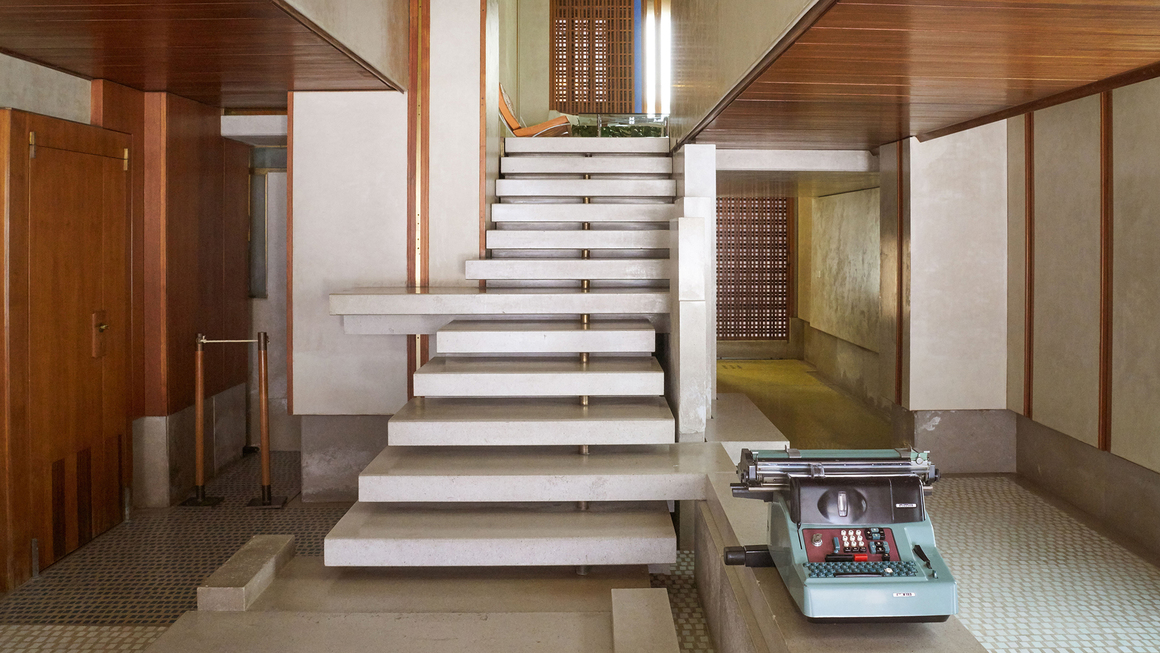 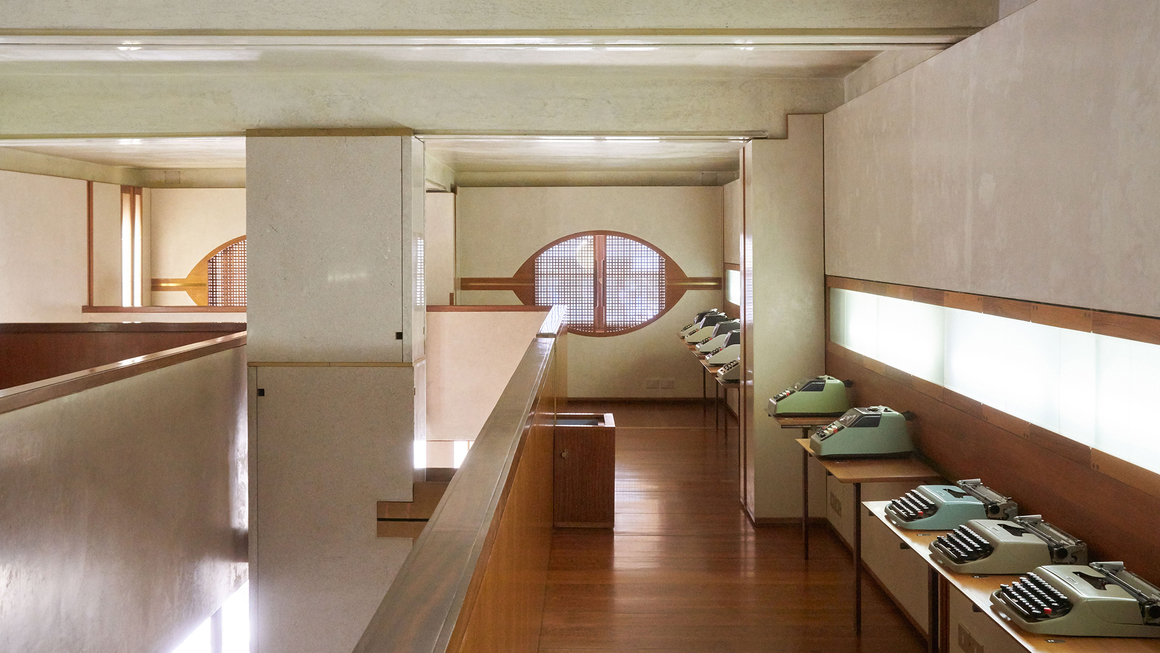 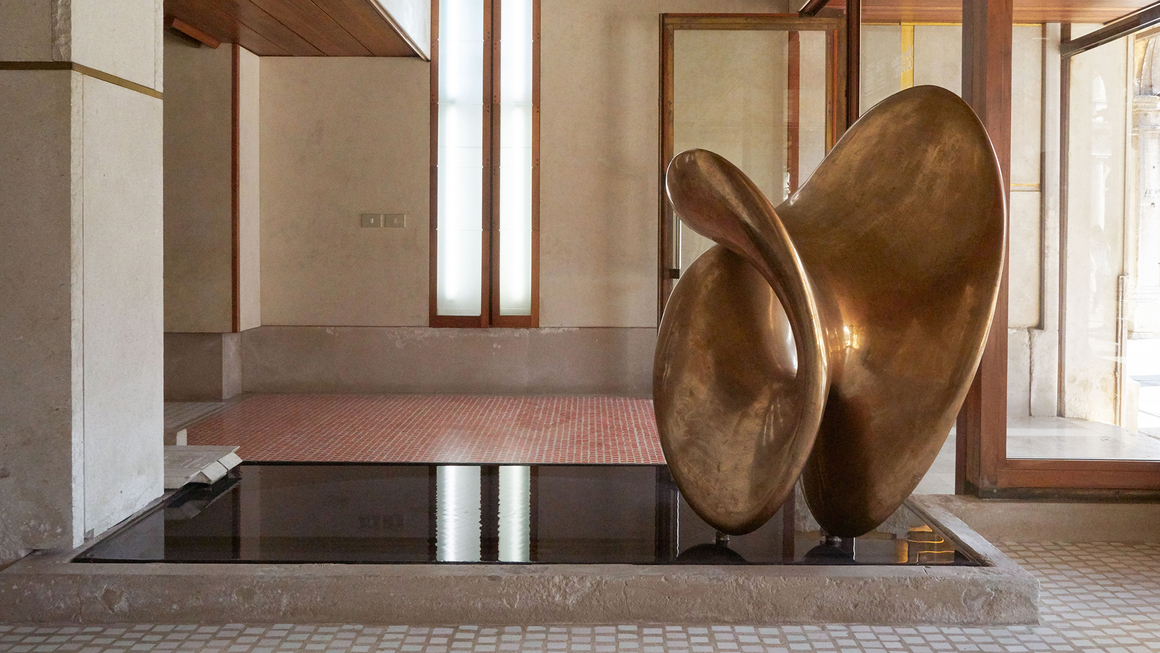 Leslie began calling the impending journey a “design pilgrimage.” During our week-long trip to the Olivetti Showroom, the Fondazione Querini Stampalia, Castelvecchio, and the Brion Cemetery, Leslie photographed each site and I took notes. The following story is the first of a series that together form an homage to a design hero.

Adriano Olivetti was the ideal client for architect Carlo Scarpa. A champion of contemporary art, design, and technology, he encouraged a radical style of production that hinged on cross-disciplinary collaboration.

Olivetti was committed to enriching the cultural landscape of Italy, and, in the 1930s, as the general manager of his family’s business, he often commissioned designers to create avant-garde spaces that enhanced the production processes, the lifestyles of his workers, and the products they made.

Under his auspices, the company developed a radical approach to production: rather than restricting his industrial designers to the roles of stylists, Olivetti involved them from the start, ensuring that they contributed to decision-making from tooling to stylistic details.

In 1956 Carlo Scarpa was the recipient of the National Olivetti Award for Architecture. The following year he was commissioned by Olivetti to create a showroom for the display of the company’s typewriter collection. It was understood that the showroom would display new and cutting-edge products, but most importantly it would reveal Scarpa’s talent as an architect.

Scarpa was born in Venice and studied architecture at the Accademia di Belle Arti. After graduating in 1926, he became the design director of the Venini glassworks in Murano, where his fifteen years of experience instilled in him an understanding of the craft and a commitment to collaboration. Unlike many architects, Scarpa enjoyed working closely with craftsmen and revelled in a two-way design process.

Located in the shopping arcade of the Piazza San Marco, the Olivetti Showroom in Venice was designed and completed between 1957 and 1958. The Olivetti branding isn’t simply integrated into the architecture—it defines the space. Both the company logo and the “Greek spiral” trademark, designed by Marcello Nizzoli, are chiseled into the façade while the lines emanating from the spiral stretch into the showroom and define the composition of the interior.

A cascading marble staircase anchors the low, elongated space. The offset sequence and large scale of each stair are reminiscent of the stone footpaths in ancient Japanese gardens. Scarpa once said that all architects love paths. Growing up in Venice, a city defined by labyrinthian streets built of stone slabs that twist and turn into endless discoveries, no doubt inspired his affection for pathways.

The ground floor of the showroom is animated by square sections of hand-cut colored glass, an homage to Scarpa’s years working in Murano. Material and spatial transitions direct visitors around the ground floor and up the staircase to the mezzanine. At risk of being a dark, cramped space, the upper level is surprisingly comfortable and amply illuminated by oval and square windows. Wooden lattice screens contoured to the windows direct the light and add dimension to the showroom.

A community of craftsmen in Venice’s industrial neighborhood of Cannaregio developed Scarpa’s detailed designs. Favoring unorthodox combinations of materials and methods—machined metal parts with elaborately worked wood or stone—the architect often had to coax his craftsmen into experimenting and engineering new techniques.

Olivetti’s typewriters are located throughout the showroom with the most prominent placement on a concrete plinth adjacent to the central staircase. Upstairs, they are arranged in neat rows and rest on jewel-like metal and wooden armatures. The display systems emphasize the form and color of the typewriters, rather than the mechanics.

To the right of the entrance a bronze sculpture by Alberto Viani, Nudo al Sole, stands in the center of a black marble pool. The sculpture’s setting is no more spectacular than that of the typewriters. In this way, Scarpa elevates the commercial product to the level of artwork.

The Olivetti showroom was realized because of the alliance between an exceptional patron and a dedicated architect whose meticulous design process relied on cross-disciplinary collaboration. As such, Scarpa negated the distinctions between art, craft, and design and brought about a truly extraordinary space.

The purpose of a pilgrimage is typically to search for moral or spiritual significance or, in our case, to be reminded of our values and aspirations as designers and artists. At a time when the divisions between art, craft, and design are exceptionally ambiguous, Scarpa’s work stands as a reminder that the three creative practices don’t necessarily exist in isolation from one another. In fact, they can simultaneously contribute and enhance architecture.

Mariah Nielson is a London-based curator and writer. She is also the director of the J.B. Blunk Estate and co-founder of the design brand Permanent Collection. 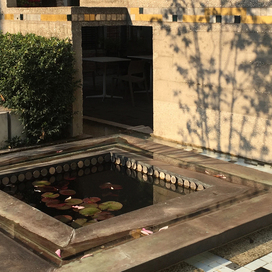