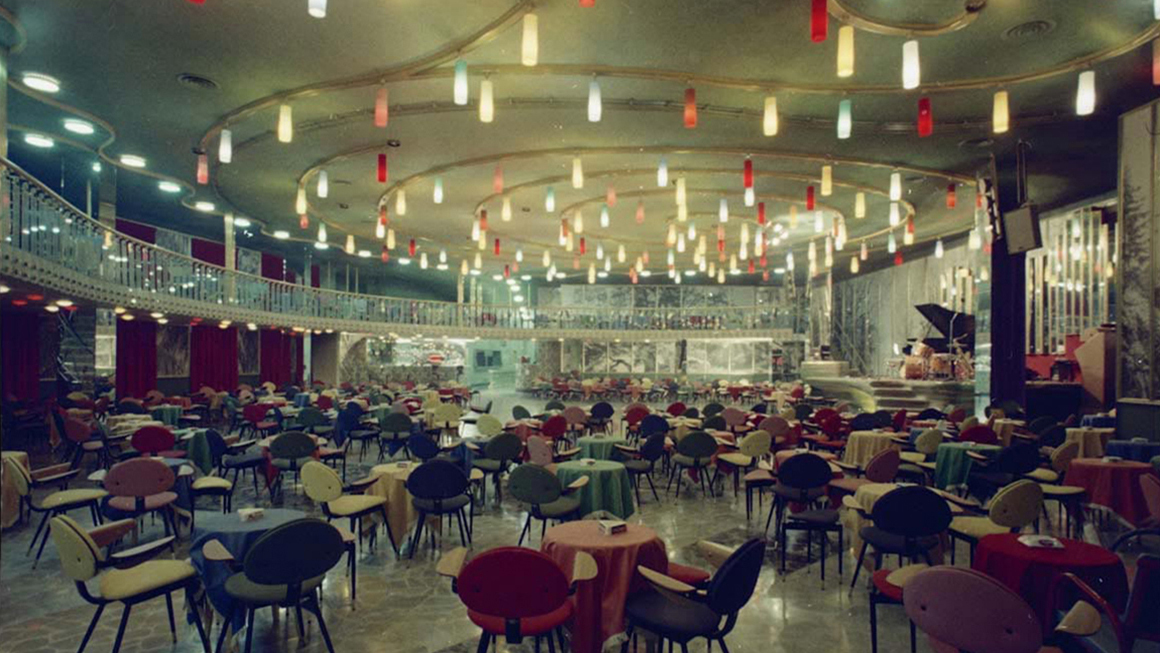 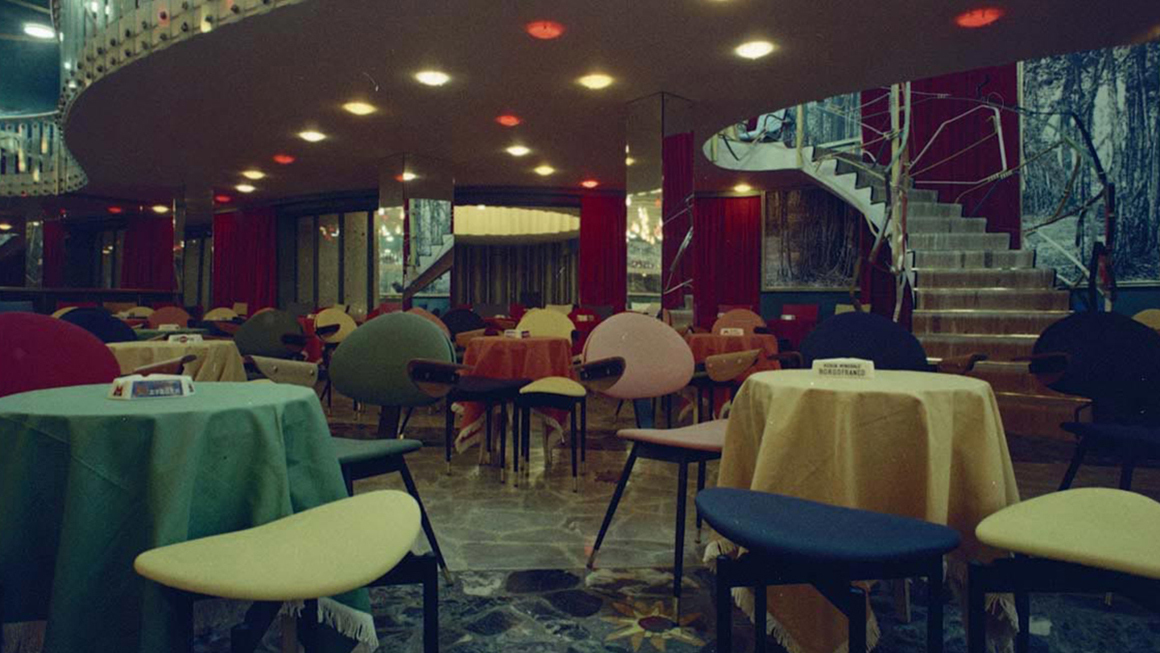 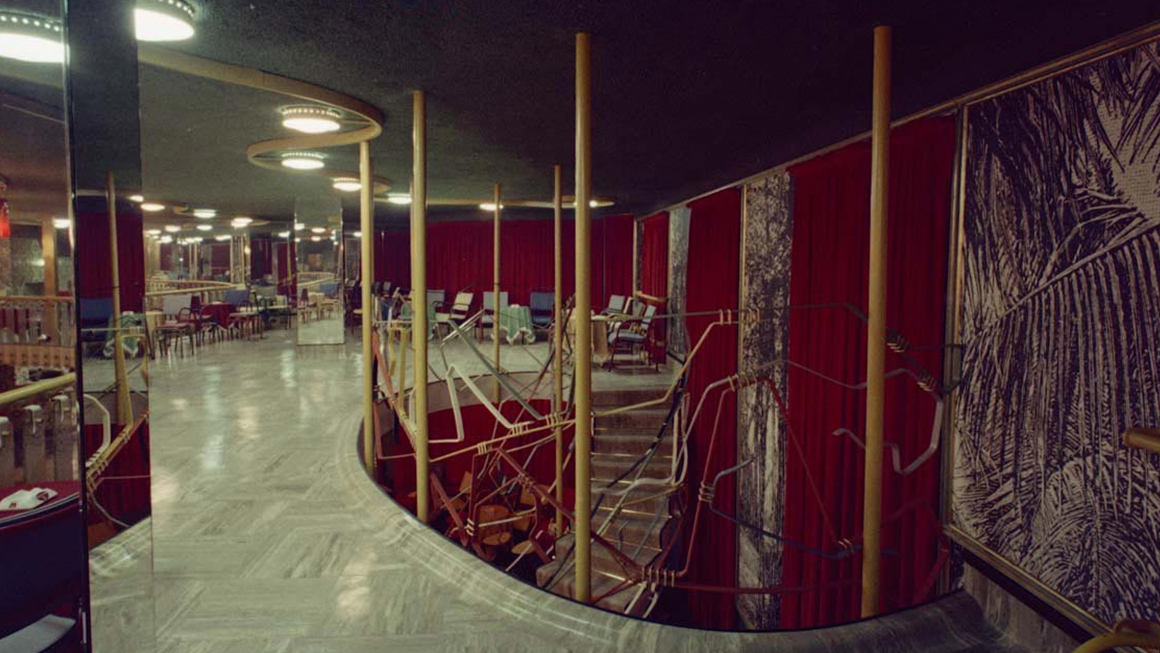 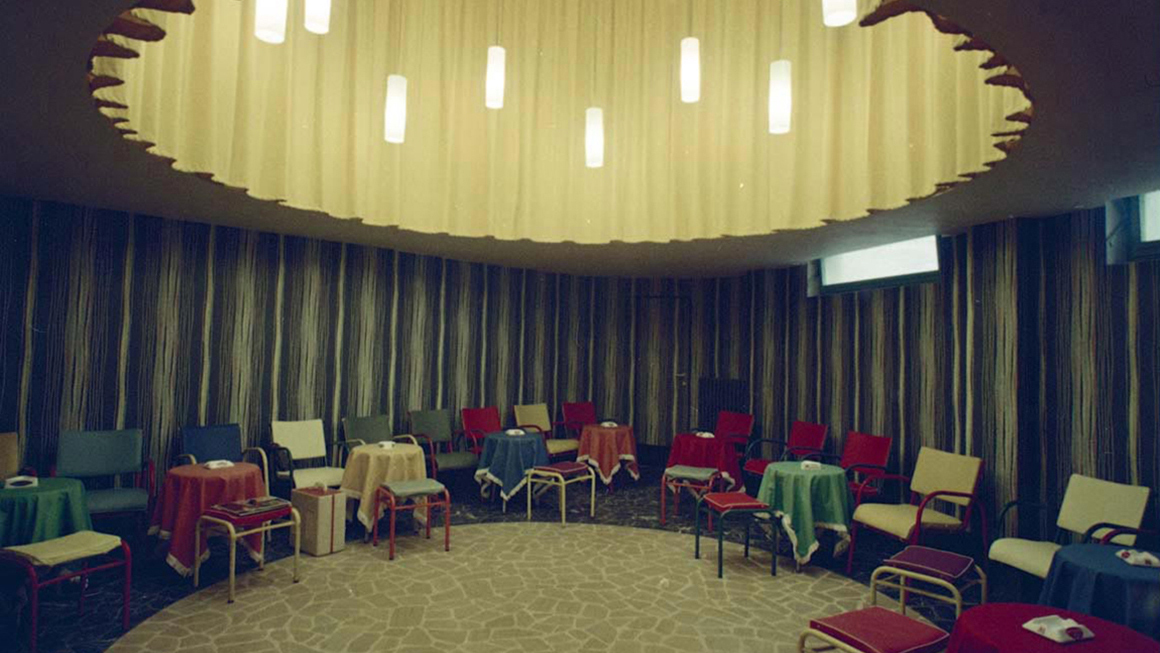 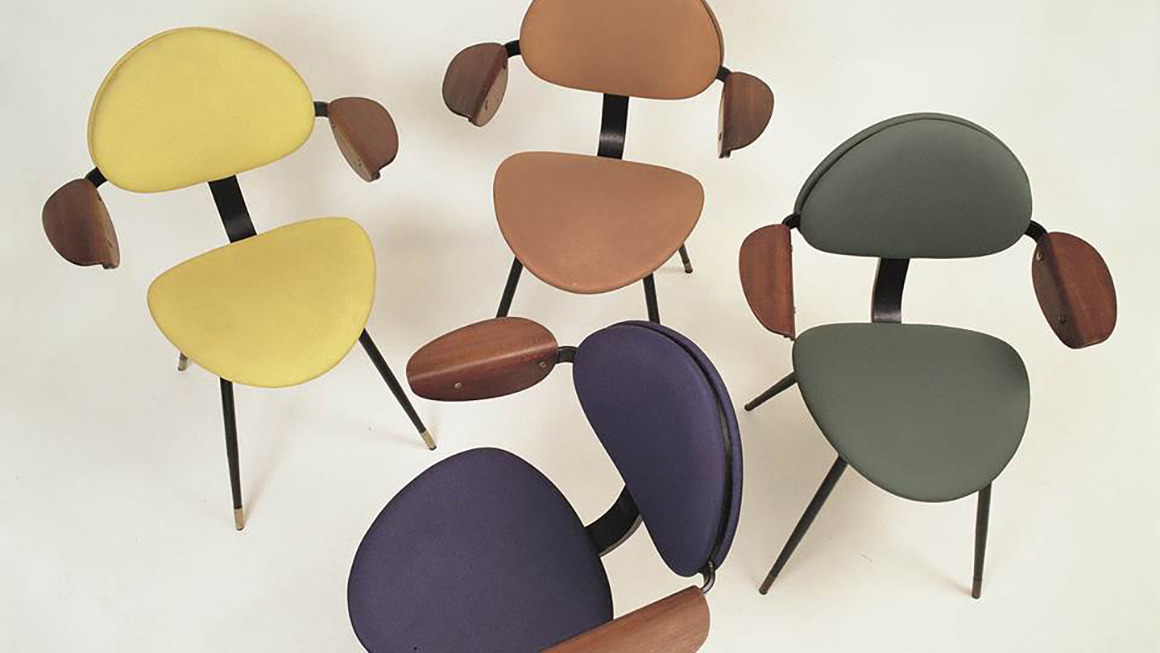 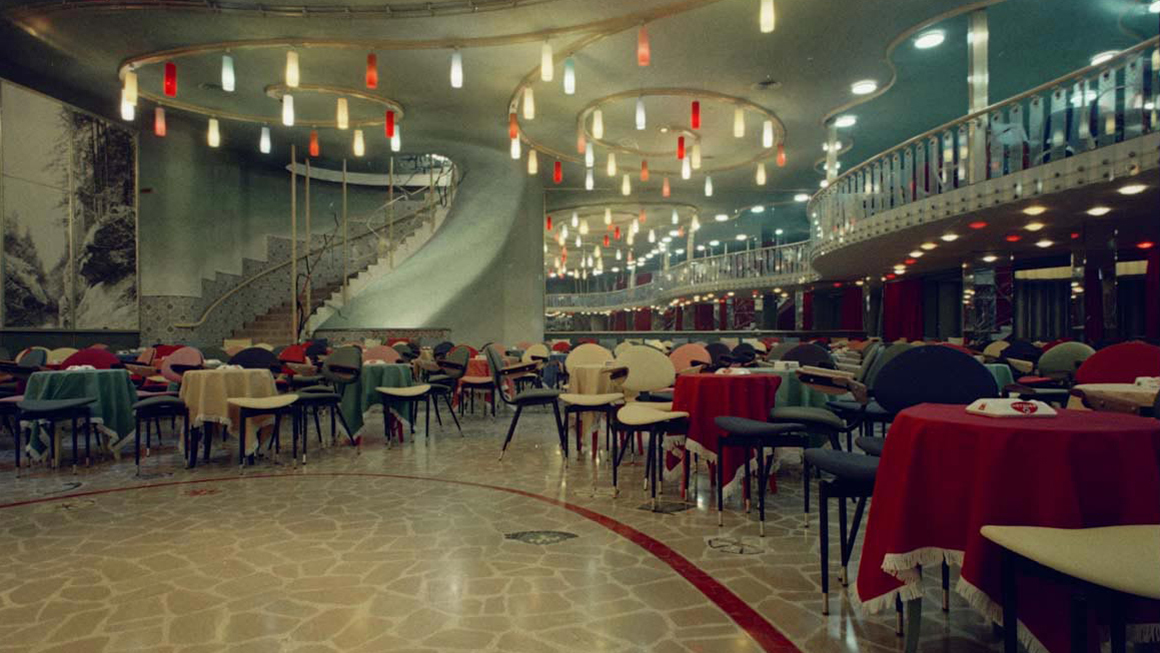 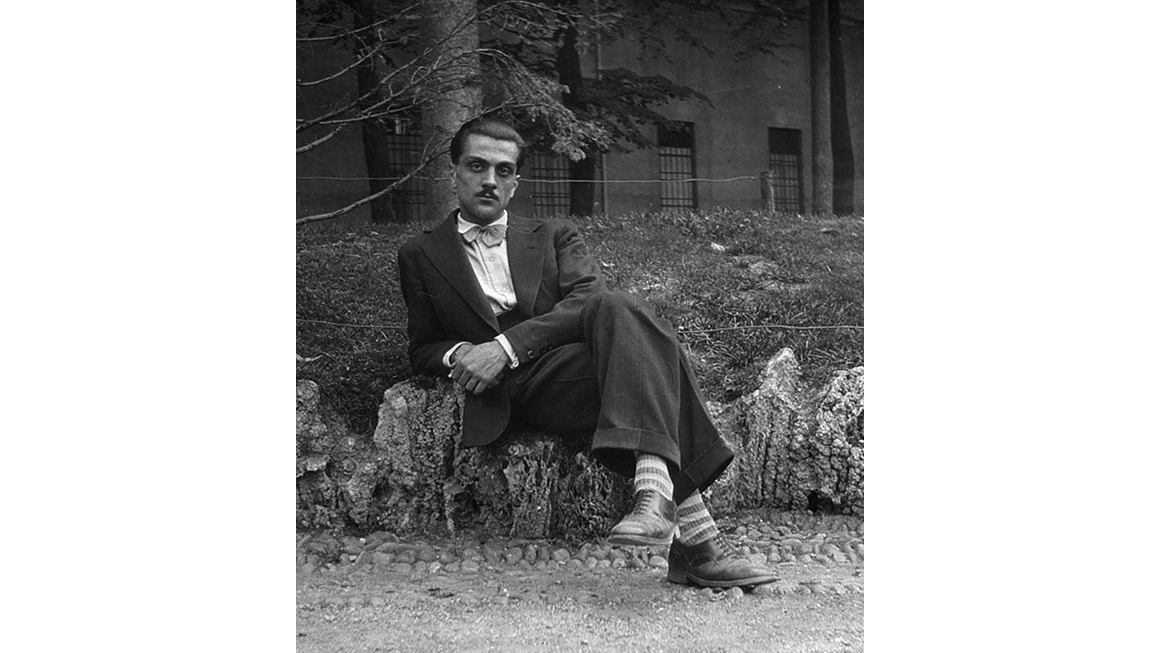 When Carlo Mollino pulled up outside an abandoned Turin metal scrapyard in his Morris Minor station wagon on a drizzly day in March of 1959, he saw his prospective client, local impresario Attilio Lutrario, shivering under a makeshift shelter. Waiting beside him were Lutrario’s teenage son, Attilio Jr., and Mollino’s friend and fellow architect Carlo Alberto Bordogna.

Lutrario had bought the scrapyard to build a dance hall on the site and invited Bordogna to design it. Bordogna had agreed on condition that another architect would be responsible for the interior and suggested Mollino.

Then fifty-three, Mollino was renowned as one of Turin’s most gifted and charismatic designers, whose work was steeped in his personal passions: erotica, technology, skiing, fast cars, and even faster aircraft. The Lutrarios were astonished to see the infamous “dark prince of Italian design” emerging from a tiny station wagon. “Out came a strange person with the air of a craftsman, a plumber, a carpenter,” recalled Attilio Jr. years later. “Not what we had expected.”

After traipsing around the rain-sodden site, Mollino demanded a hefty fee for his services, more than Lutrario could afford. But once Mollino described his vision for the dance hall—a midsummer night’s revel in a forest—Lutrario agreed to pay up. Believing that “everything is permissible as long as it is fantastic,” Mollino planned the project accordingly while ensuring that his fantastical flourishes would disguise the shortcomings of the old scrapyard.

The principal advantages of the site were its imposing size and height. The disadvantages included an awkward shape and inauspicious entrance along a long, narrow corridor past offices and restrooms.

Mollino’s solution for the latter was to imbue the corridor with an air of mystery by juxtaposing dramatic lighting with the vibrantly colored patterns of hand-painted ceramic tiles commissioned from specialist artisans in Vietri sul Mare, a town on the Amalfi Coast. He flew his own aircraft to Vietri to inspect production, sometimes taking Lutrario with him. Mollino disguised the doors of the offices and restrooms by cladding them with mirrors, and laid mosaics of Italian marble on the floor as a hint of the opulence that awaited Lutrario’s clients as they entered the dance floor.

And what a spectacle. The dance floor was positioned in the center of a cavernous space, surrounded by circular tables and chairs whose rounded seats, backs, and arms resembled the petals of forest flowers. The woodland theme continued in the soft pinks, golds, browns, and greens of the upholstery and linens, and in the natural wood and giant photographic panels depicting antique engravings of forests that clad the walls, conveniently camouflaging any nooks and crannies.

A balcony surrounded the dance floor, creating a mezzanine from which people could observe the dancing through intricately curled wrought-iron railings and in mirrored-glass panels. Dozens of lights with brightly colored plexiglass shades were suspended from a rail that spiraled around the gold-painted ceiling, mimicking the dancers’ movements.

It took eighteen months to complete the construction of Le Roi Dancing, as Lutrario named it. During that time, Mollino was creating another design fantasy in a pretty 19th-century apartment beside the River Po in the center of Turin. He never lived in the apartment, yet took great pains with Casa Mollino’s design, furnishing the bedroom as an ancient Egyptian tomb.

Casa Mollino represented the darker, deeply private side of Mollino’s design sensibility, and Le Roi the convivial, public one, a place where people could flirt, dance, chat, and listen to music. Both spaces have survived, although most of Mollino’s original furniture and fixtures have disappeared from Le Roi. Thankfully the layout is unchanged, as are the colorful lights whose curves still echo the steps of the dancers on the marble mosaic floor.