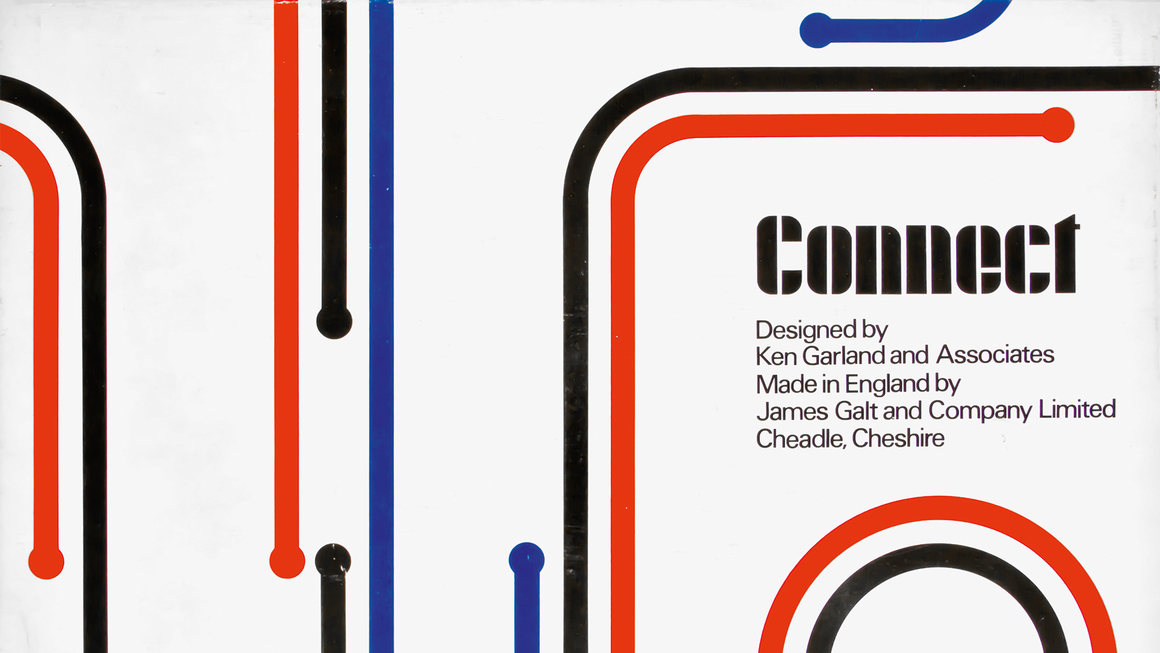 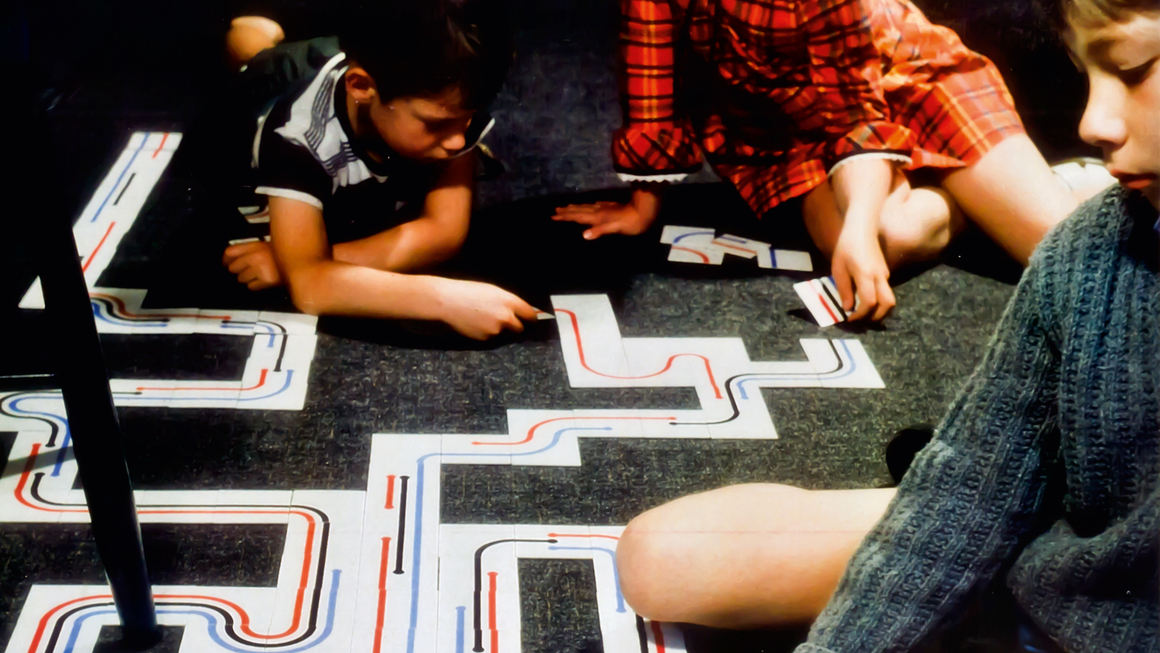 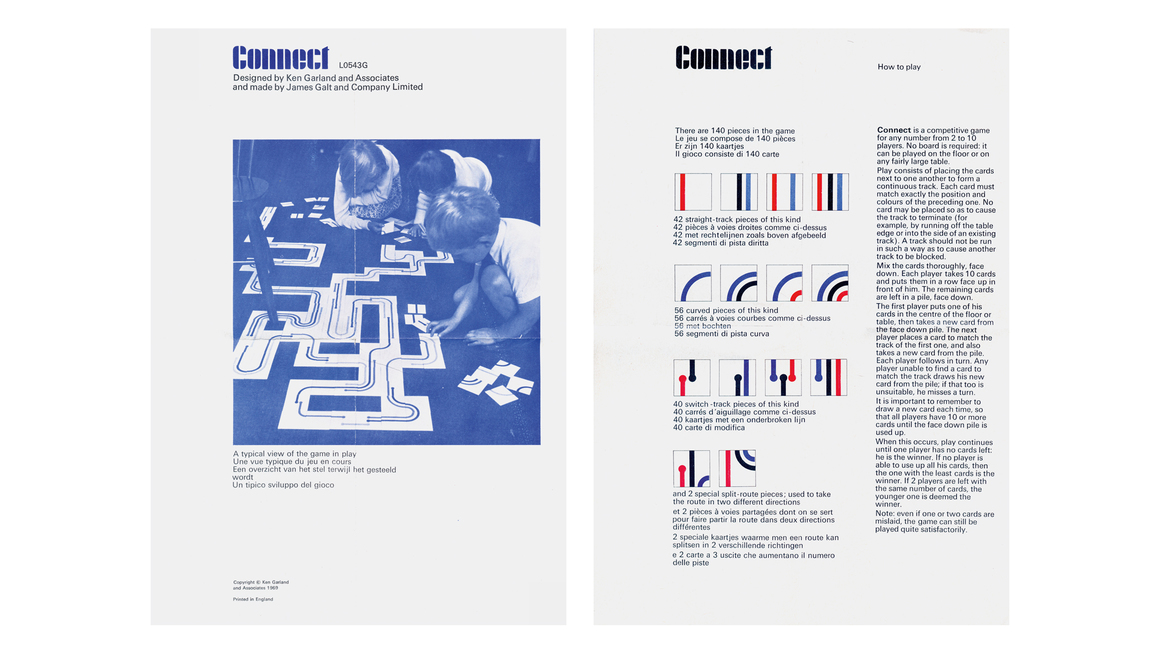 Sometimes the consumer really is right, or so the British graphic designer Ken Garland discovered after he asked some friends’s kids to test a new puzzle game, Connect. Every aspect of the game was completed, except one: what would happen if there was a tie between two children at the end? “We didn’t know what to do,” Garland recalled. Luckily, one of the amateur researchers came to the rescue by suggesting that the younger of the two should be declared the winner.

Problem solved. Designed by Garland and a colleague, Robert Chapman, in the dazzlingly minimalist Swiss Style of graphics, Connect consisted of 140 cards, each bearing a different sequence of black, red, and blue lines that could be joined together in seemingly endless combinations. It swiftly became a best seller after its introduction in 1969 by the Manchester toy maker, Galt Toys, and was particularly popular with progressive British parents, who liked their offspring to mix learning and play.

Connect, which is still manufactured in a revised form by Ravensburger—the German toy company founded by the publisher Otto Maier—was the most successful of dozens of design concepts that Garland developed for Galt Toys during the twenty-one years they worked together. The relationship began in 1961 when James Galt & Company, which was founded in 1836 to sell school supplies, hired Edward Newmark, the ambitious, young manager of the Abbatt Toy Shop in London, with a brief to modernize its toy business.

Newark started by persuading Garland, who had designed Abbatt’s graphics for the previous two years, to switch allegiance. Garland agreed, and devised a logo for the newly named Galt Toys division that signaled its commitment to contemporary design in the use of a sleek, recently released German typeface, Folio Medium Extended.

Garland insisted on designing every visual manifestation of the business, from catalogues and packaging to the graphic elements of its factory and new London store. All of his work was uncompromisingly contemporary in its simplicity and clarity, while expressing the playfulness of the toys in vibrant colors, cheerful close-ups of children’s faces (mostly those of his own kids and their friends), and mash-ups of the logo, which was depicted in the first catalogue with its letters jumbled up to spell Galy Tots. “We were determined not to let the Galt Toys logo become a sacred cow, not to be mucked around with,” Garland said years later. “It would indeed be mucked around with, but only by us.”

He and his team then turned their attention to Galt’s products by developing ideas for wooden toys and games during quiet moments in the studio. Galt agreed to consider their proposals and to pay royalties on the sales of any concepts that went into production. “If we ever had a Friday afternoon where there didn’t seem much to be doing, one or other of us would start thinking up another idea for a game or something,” Garland recounted. This process not only yielded Connect, but other popular games including his puzzle Trap Snap, and Anymals and Upside-Down Jigsaws, both designed by Daria Gan, who was a gifted illustrator.

The steady flow of design fees and royalties from Galt Toys enabled Garland and his colleagues to devote part of their time to more personal design projects. A committed pacifist, Garland designed posters and pamphlets for the Campaign for Nuclear Disarmament and the left-wing Labour Party throughout the 1960s and 1970s. He also campaigned within the design community for designers to recognize their social and ethical responsibilities, notably in First Things First, a design manifesto that he wrote in 1963 and encouraged like-minded designers to sign before circulating it to the media.

First Things First urged designers to ensure that their work made a positive contribution to society. Thanks to his unusually enlightened client, Garland could practice what he preached in his work on Connect and the other playful learning projects he designed for Galt Toys.

Alice Rawsthorn is a London-based writer on design. She is the author of Hello World: Where Design Meets Life published by Hamish Hamilton. Her newest book, Design as an Attitude, was published by JRP|Ringier in May 2018.