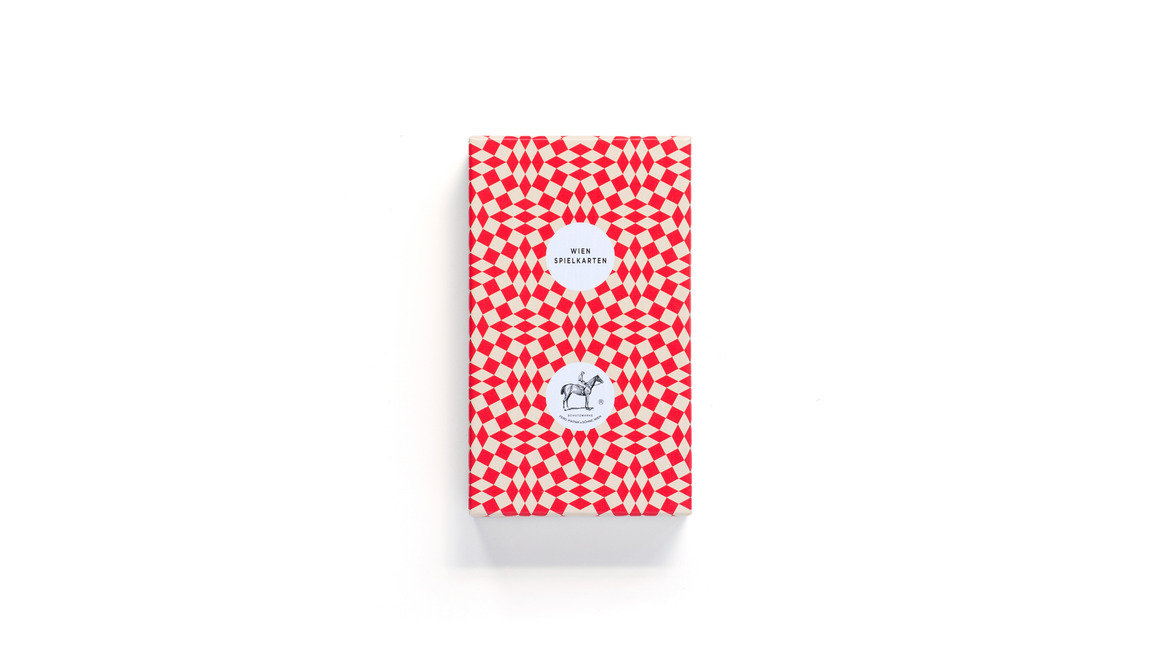 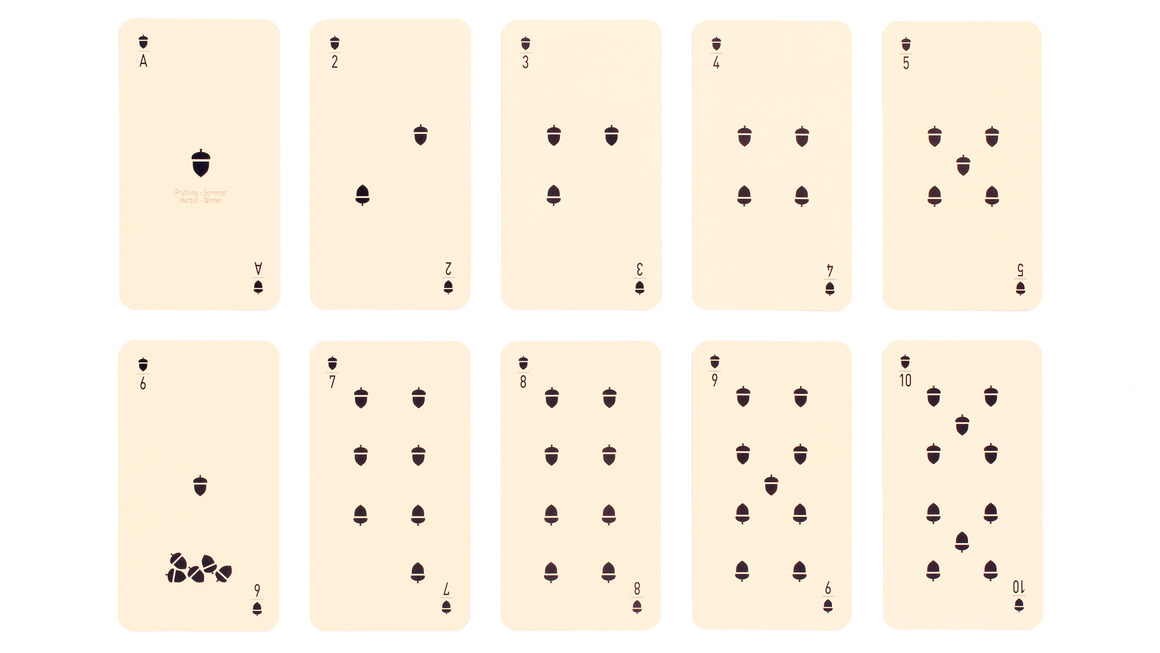 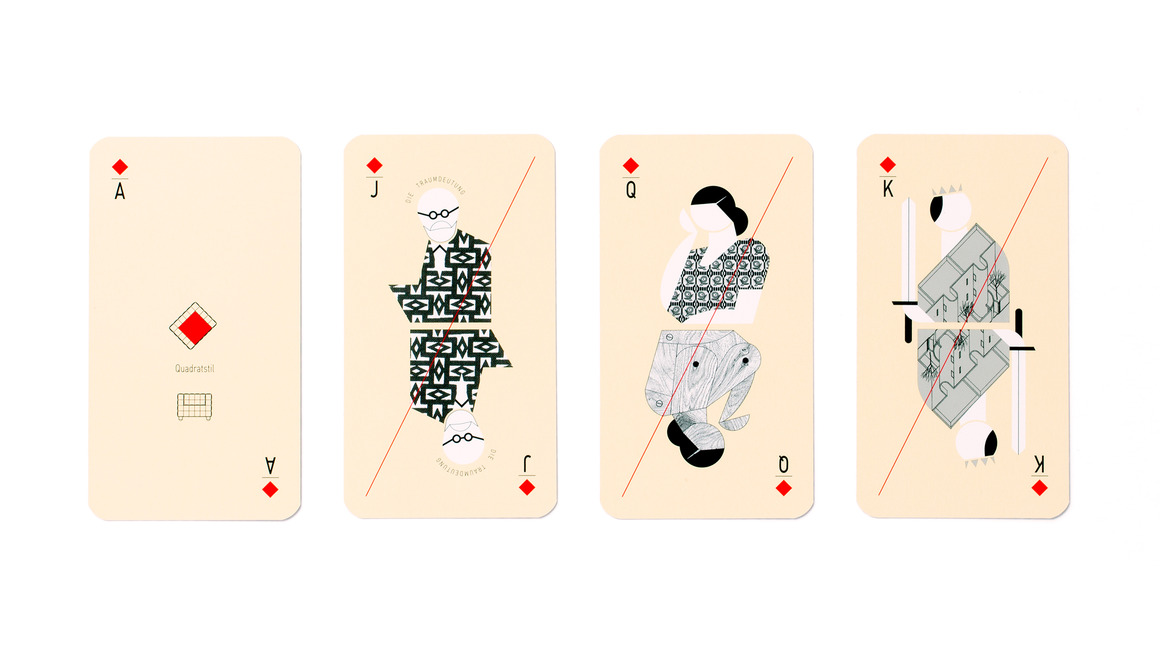 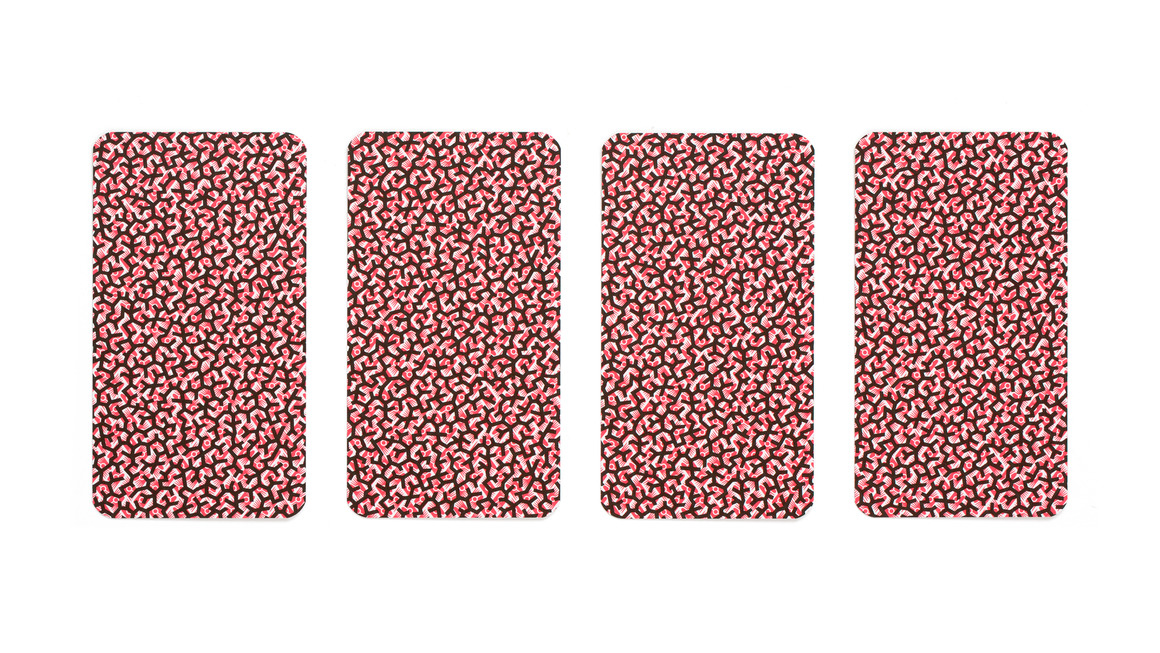 What a femme fatale. As well as marrying not one or two, but three of the most influential cultural figures of the early 1900s—successively the composer Gustav Mahler, architect Walter Gropius, and novelist Franz Werfel—Alma Schindler, an Austrian socialite who was (of course) both beautiful and vivacious, numbered the artists Gustav Klimt and Oskar Kokoschka among her other conquests. The most tempestuous of her relationships was with Kokoschka, who was so desolate when she spurned him for Gropius that he commissioned a life-size doll to be made as an exact replica of her.

The top half of the doll appears beside a mirror image of Schindler herself on a playing card in which she is cast as the queen of diamonds. Not that her fractured portrait is the only oddity in the card’s design. The striking graphic pattern on her dress evokes a 1910s work by the Austrian architect Josef Hoffmann, who also inspired the strange shape of the diamond motif. It is a square rotated 90 degrees to reflect Hoffmann’s fondness for quadratic symbolism. Even the pattern on the back of the card has a hidden meaning, being inspired by the traditional tarock cards manufactured in the Viennese factory of Ferdinand Piatnik & Söhne, which also made this queen of diamonds.

The other cards in the pack are equally rich in references to the cultural life of early 20th-century Vienna. Designed by Simone Farresin and Andrea Trimarchi, the young Italian designers who work together as Studio Formafantasma, the cards were the winning entry in a 2012 Vienna Tourist Board competition to commission a souvenir of the Austrian capital. Having read how popular card games were with the artists and intellectuals who frequented Viennese coffee houses, Farresin and Trimarchi decided to design a set to be embellished with mementos of the city’s cultural heritage.

Formafantasma’s other projects are as subtle and expressive as the cards, but mostly focus on Italy’s artisanal history, and its current social and political tensions. Colonialism and racism are key themes in the Moulding Tradition series of ceramics and Colony blankets. To make the objects in the Autarchy and Botanica collections, the duo invented new types of biodegradable materials from the natural resources of different areas of Italy. The results are conceptually smart, thoughtful, and provocative, yet also formally elegant, as the Wien Spielkarten, or Vienna Playing Cards, demonstrate so charmingly.

The seductive Schindler is not alone in being given a starring role in the pack. Among her fellow queens is the writer Gina Kaus, who is depicted with a mustache in a nod to the male pseudonym she used for publication; while the American-born dancer Josephine Baker is shown “wearing” the house she commissioned from the architect Adolf Loos but which was never built, and her signature bananas as a hat. The kings include Hoffmann, the philosopher Otto Weininger, and collages of early 1900s Viennese architectural gems. The jacks combine more allusions to the city’s design heritage with Sigmund Freud and the composer Arnold Schoenberg. The two jokers are cast as coffee-house waiters: one carrying a candy dish designed by Oswald Haerdtl; and the other serving coffee in the traditional Austrian style with a spoon turned upside-down on top of a glass of water.

Loos’s heart appears on the ace of hearts card, and a Hoffmann chair on the ace of diamonds. A popular coffee house chair, a Thonet No. 14, is deconstructed on the ace of clubs, and the club symbol is represented by the woven straw on its seat. The spade motif has been replaced by an acorn, once a popular suit for cards in Germany and parts of Austria. Though my favorite card of all is one that is usually unobtrusive, the six of acorns with five of the acorns clustered at the bottom as if they have tumbled from an oak tree.