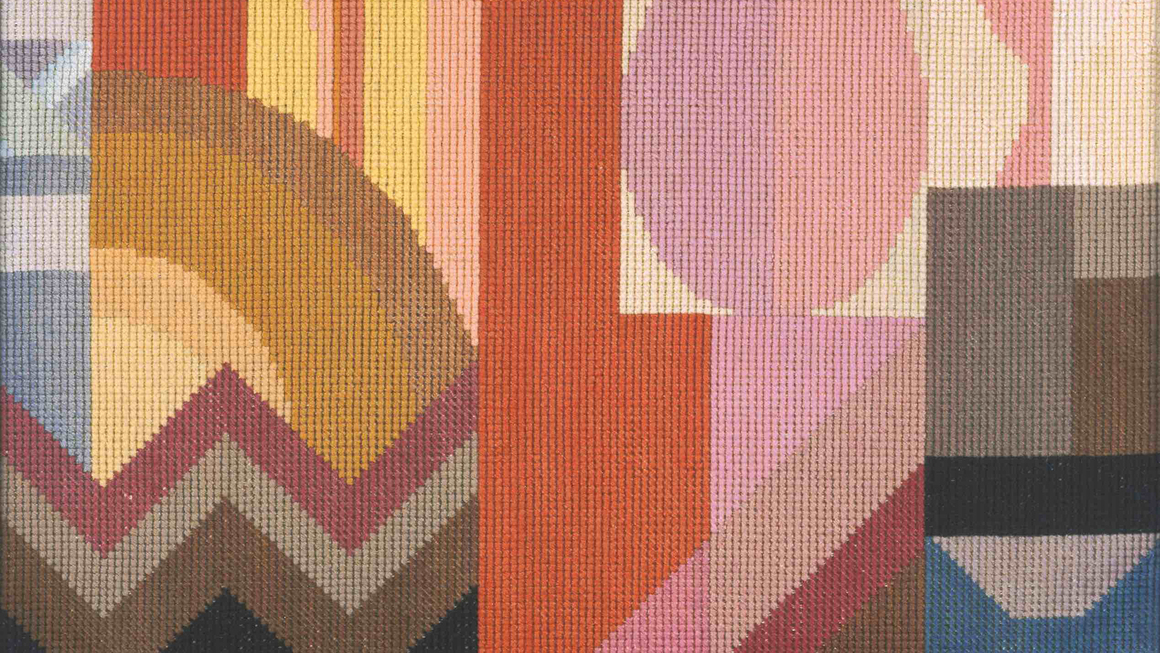 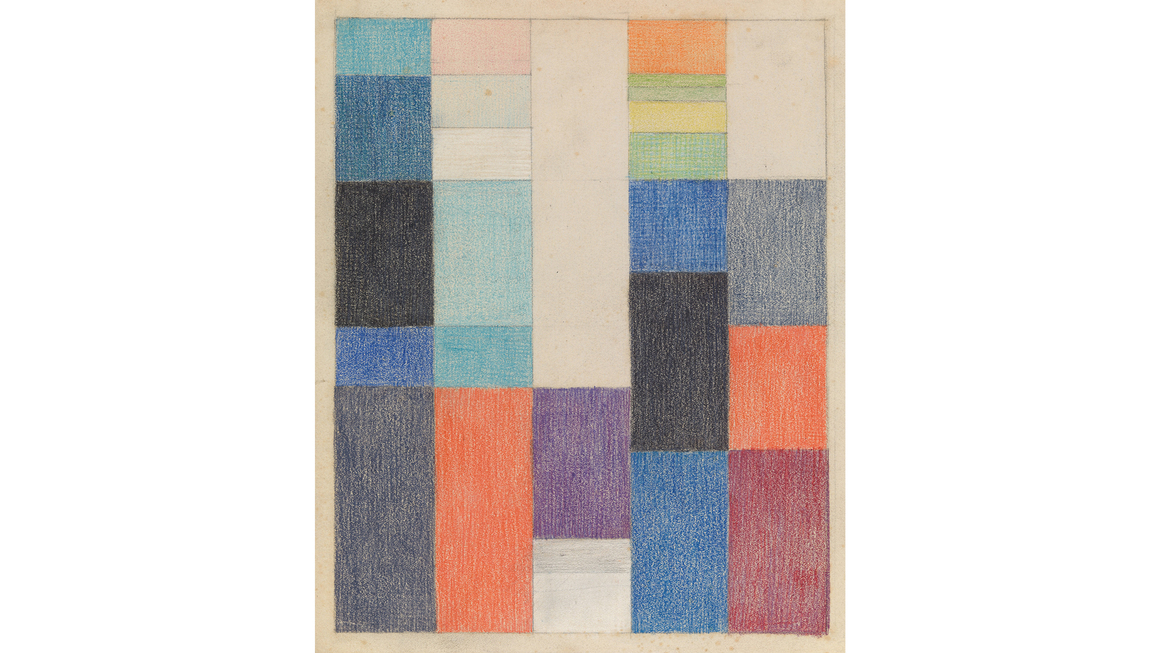 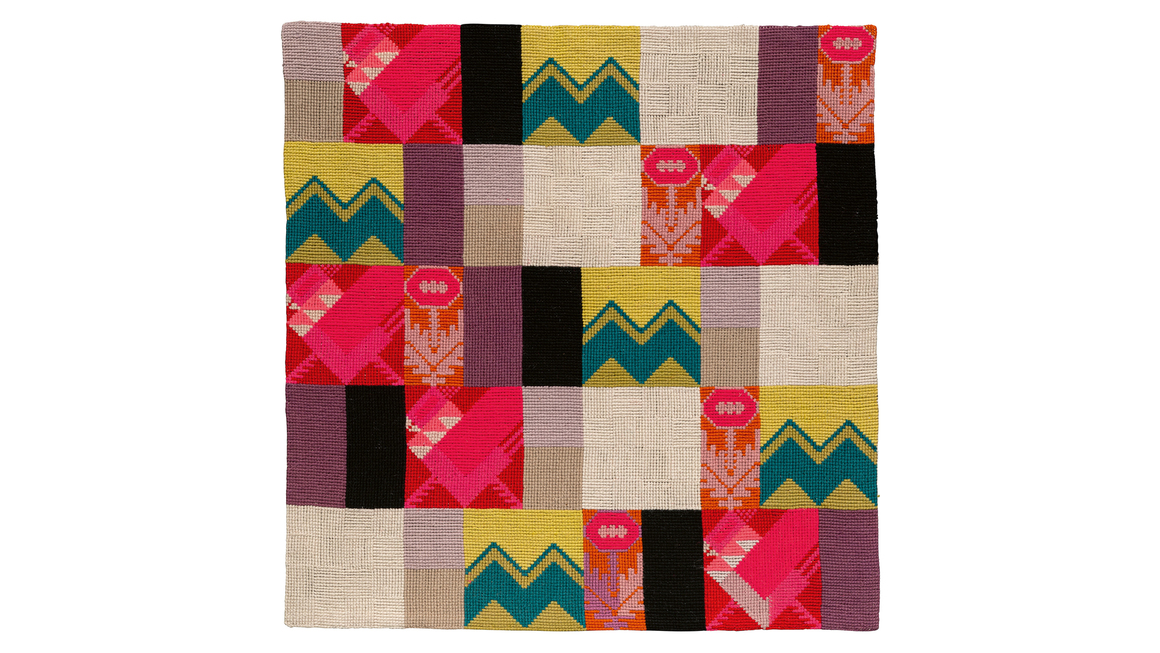 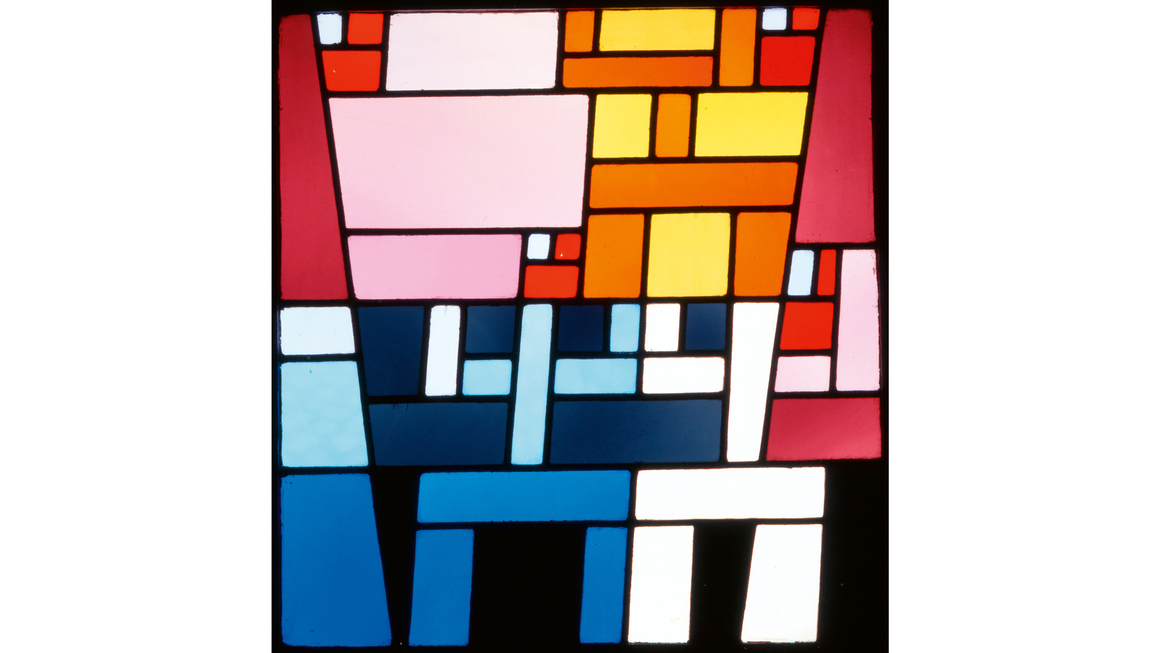 Sophie Taeuber-Arp’s early embroideries, beaded bags, necklaces, cushion covers, and tablecloths earned her a teaching position, at age twenty-seven, in the Zürich School of Arts and Crafts’s applied arts department in 1916, a few months after the opening of the legendary Cabaret Voltaire. In the years that followed, Taeuber-Arp became embedded in the Zürich Dada scene, performing dances at soirées, making avant-garde marionettes for the newly founded Swiss Marionette Theater, and creating a groundbreaking series of abstracted sculptural “heads.” Yet she also seriously pursued her career as an interior designer, devoting herself more single-mindedly to her fine art practice only in the 1930s.

It was, in fact, Taeuber-Arp’s early applied works, in particular her embroideries, that allowed her to develop her striking sense of proportion and rhythm and finely tuned color combinations. While her aesthetic sensibility culminated, arguably, in the play of colorful protruding cylinders and circular cutouts of her reliefs, it began in the tapestries, drawings, and gouaches known as Vertical-Horizontal Compositions and grew from there, disrupting the idea of a fixed—and gendered—separation between applied and fine art. Indeed, Swiss curator Markus Brüderlin gives Taeuber-Arp a central place in his 2014 argument for an alternative trajectory for abstract art that leads not through Impressionism and Cubism but from the geometric arrangement inherent in warp and weft—especially and pointedly in the grids of embroidery grounds.

Despite participating in attempts to overcome the divide between applied and fine arts—with exhibitions non-hierarchically featuring both—Taeuber-Arp was posthumously considered, above all, a fine artist, both as a Dadaist and for her abstractions of the 1930s. For Gabrielle Buffet-Picabia, Taeuber-Arp was “the painter of the circle.”

But the applied arts were Taeuber-Arp’s bread and butter. The house she designed on the outskirts of Paris in the late 1920s was paid for not through the sale of artworks but thanks to the stained glass and wall and ceiling decorations she made for the Aubette entertainment complex in Strasbourg, part of a collaboration with her husband, the artist Jean Arp (also known as Hans Arp), and Theo van Doesburg.

In the wake of Taeuber-Arp’s tragic accidental death from carbon-monoxide poisoning in 1943, Jean Arp continued to produce and sell work in her name; he also commissioned others to complete, re-create, and “restore” her pieces. Although Arp and Taeuber-Arp had made collaborative works during her lifetime and this act was doubtless well-intentioned, it was the opposite of conservation best practices. Coupled with Arp’s insistence that her artworks be shown in his exhibitions, it also kept Taeuber-Arp in his shadow and firmly positioned her within the fine arts tradition, obscuring her extensive applied arts practice.

At the time of her death, the Arps were in exile from their home in Paris, which was under Nazi occupation. In both Europe and the United States, abstract art seemed a niche concern with an uncertain future. Europe’s avant-gardes had been subjected to derisive mockery in the Nazis’ 1937 exhibition Entartete Kunst (Degenerate Art). The journal Plastique/Plastic that Taeuber-Arp co-founded that same year sought to defend the achievements of concrete art, a term considered preferable to abstract art because, in van Doesburg’s words, “Nothing is more concrete, more real than a line, a color, a surface.”

In the journal’s pages, Herta Wescher spoke of Taeuber-Arp and her peers establishing a “new pictorial structure out of pure elements.” The philosophical, aesthetic, and moral radicalism of such art was further obscured by the late 1940s by the “organic” abstraction—and machismo—of Abstract Expressionism. This movement's championing of self-expression was indeed far from Taeuber-Arp’s meticulously planned interplay of geometric forms. But today we can better see how, starting with the inherent structural constraints of the embroidery ground, she made works whose power lies in the relationships between their carefully differentiated constituent parts.

Alexander Scrimgeour is a writer and editor based in Berlin. 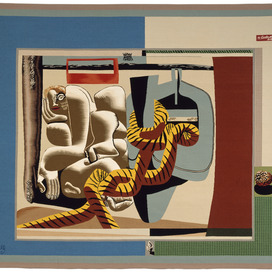