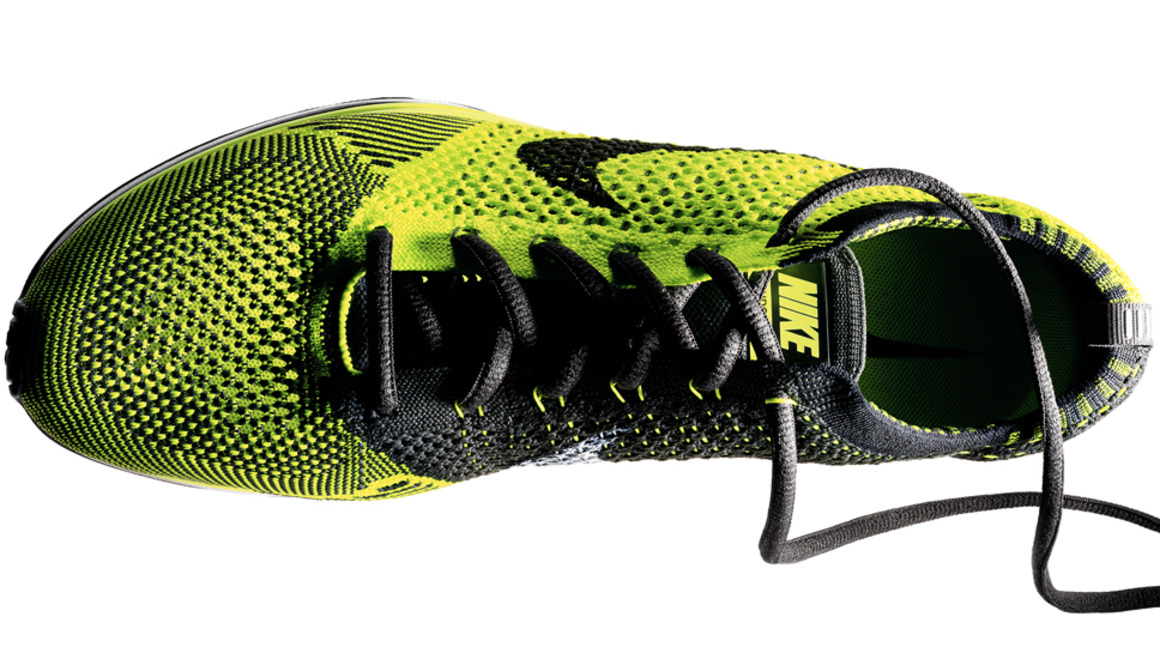 I work in a kitchen of sorts. One with ever-changing ingredients and a client that demands—and deserves—the greatest dish we can offer. That laboratory, the Nike’s Innovation Kitchen, doesn’t serve food but, instead, new technologies and revolutionary concepts to athletes around the globe, helping them to be faster and stronger and to reach their performative goals. We invent new materials and master unique processes to lay the groundwork for the future of human potential. In 2012, the Innovation Kitchen launched Nike Flyknit and forever altered the way we at Nike approach design. We asked athletes what felt great on their feet; they responded, “Socks.” Socks fit snugly, yet go unnoticed and move symbiotically with the foot. We set out to make a shoe out of a highly engineered sock—and a simple idea quickly became a complex and exciting journey.

For more than forty years, the footwear industry has been cutting, sewing, and assembling shoes in an unchanging manner. With the Nike Flyknit, we challenged industry fundamentals by attempting to build a shoe with a single layer of knitted fabric. It was not enough to design a shoe that looked “knitted”; we wanted a product that could perform as well as or better than the traditionally constructed sport shoe. We needed to build a robust and durable structure out of what is inherently a flexible textile. And here was our biggest challenge: there were no existing processes built to do this for footwear.

A team of programmers, engineers, and designers was assembled to create a proprietary knit technology suitable for a strong and durable shoe. Since the looped structure of knit tends to expand and stretch with wear, it was necessary to find a way to add structural static support. At the time, Nike was pioneering a technology we named “Flywire.” Simply described, this is a strong cable system that gives lightweight structure to footwear in a similar fashion to the technology used in suspension bridges. The goal was to combine these technologies: to build a knitted structure within a lightweight cable system. With Nike Flyknit, we were able to create a minimal upper that feels like a sock—lightweight, formfitting, and virtually seamless.

The innovative Flyknit technology, in turn, inspired a group of artists and engineers to produce specific installations to celebrate the launch of the line throughout major cities. Ernesto Neto created SwinFlyBaby in London, a soft architectural installation of suspended crocheted net that conforms, as a participant interacts with it, to his or her body. LOT-EK in Milan and Tokyo responded to the request of local running communities and designed the Nike Flyknit Mobile Running Station to serve the urban runner. Architect Arthur Huang created the Feather Pavilion in Shanghai, whose lightweight and portable mobile architecture embodied the values and structure of Nike FlyKnit. With the myThread Pavilion in New York, artist Jenny Sabin collected data from runners using Nike’s Fuel Band Technology and developed a structured knit architecture based on the runners’ movements.

As with all successful collaborations, the critical partnering of visionaries, engineers, craftsmen, and designers should be fully acknowledged. It is these pairings that take an ounce of insight and develop it into a tangible product—in some cases revolutionizing the process and experience of the product itself. For my partners in Nike Flyknit and for all of us who enjoy the collaboration, cheers.

Ben Shaffer is the studio director of Nike’s Innovation Kitchen.