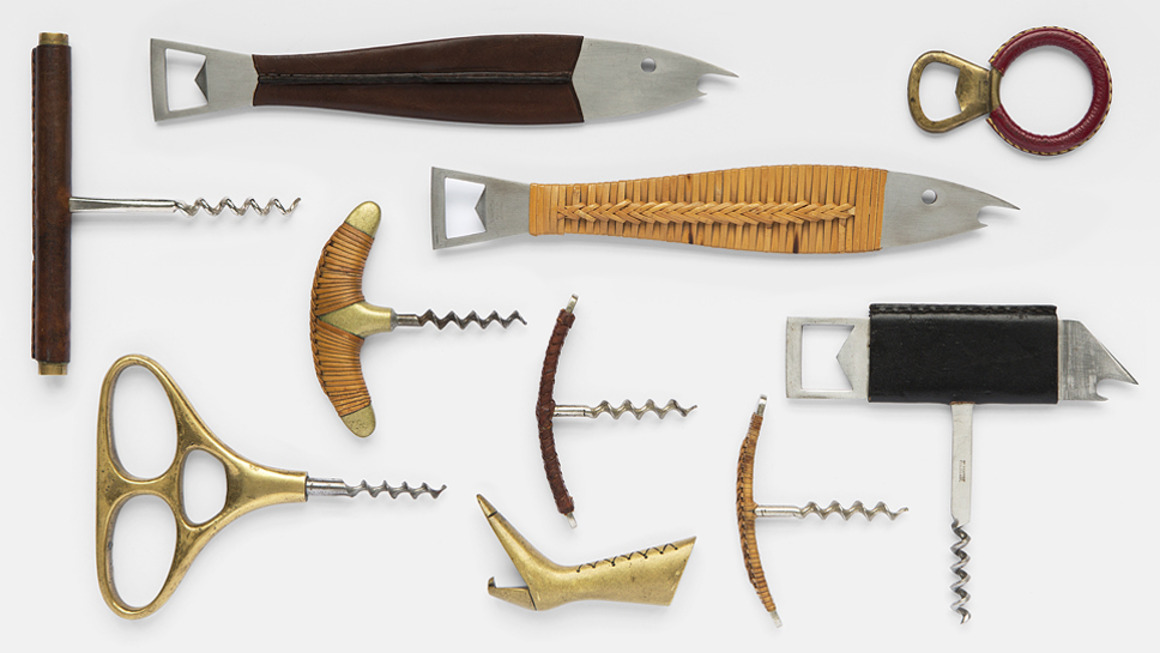 The Werkstätte Carl Auböck is a fourth-generation Viennese workshop known for its witty approach to modern industrial design. The workshop was founded in 1900 and reformed in 1926, when Carl Auböck II (1900–1957) returned from his studies at the Weimar Bauhaus and took over the metalsmith business of his father, Karl Heinrich Auböck (1872–1925). The workshop had originally created small, bronze figurines known as Wiener Bronzen, which were popular collectibles in Austria during the 19th and early 20th centuries. Auböck II, influenced by both his education and his father’s work, united functional modernism with Austrian craft, creating the visual style of the Werkstätte Carl Auböck.

During his tenure at the Bauhaus, Auböck II studied painting under color theorist Johannes Itten and later went on to become a prominent figure in 20th-century Austrian painting. Despite his success, he never abandoned his work in the decorative arts. Instead, he created sculptural yet functional objects, their use sometimes disguised by their form, such as the large skeleton key that unscrews to reveal a corkscrew or a brass ashtray in the form of a crown. Auböck II applied whimsy to the things he made; he played with material and scale, covering whiskey glasses in fur and clocks in leather, leading the workshop to become known for its unique use of material. He cast nine-inch functional brass paper clips and oversized functional brass clothespins (predating Claes Oldenburg) as paperweights and desk accessories. Other notable works were made with horn, bone, and found objects such as pebbles and tree stumps, all maintaining their natural form.

During the 1940s and ’50s, Carl Auböck II worked closely with his son, the architect Carl Auböck III (1924–1993), who later inherited the company. Those who witnessed this father-son collaboration noted how the two men worked exceptionally well together; they behaved more like pals or brothers than father and son, allowing for a bit of familial competition and necessary cooperation.

Auböck III had spent some years studying at MIT and traveling abroad, meeting a rank of influential designers such as Walter Gropius, Herbert Bayer, and Charles and Ray Eames. Through his agency, the Werkstätte Carl Auböck achieved international status. They collaborated with Hermès and Pierre Cardin, and their designs became available at major department stores such as Tiffany & Co., Saks, and Neiman Marcus. Auböck III was an industrial designer and practicing architect throughout his career. He was prepared for the company’s expansion and was eager to produce on a large scale, bringing furniture and applied arts into the repertoire of the workshop.

As for style, Auböck III’s was distinct from his father’s. He intended his designs to have a relaxed look, an aura of coolness—which was something he had always admired in American design as opposed to the stuffiness he found in European fashions. He often told his son, Carl Auböck IV, that the pieces should look like “Fred Astaire dancing in tails.” While differences did emerge, the strong Auböck DNA permeated the generations, creating a singular vision for the collection at large.

Those who collect Auböck designs take great pleasure in using them; they incite both intrigue and logic, bringing delight to the simplest of tasks. While the workshop ascribed to the modern ethos of form and function, there always remained an element of humor and Old World craft, giving the collection an unexpected charm.

The Werkstätte Carl Auböck continues to produce a number of its classic designs. It stands in its original Viennese townhouse and is operated by the fourth generation of the Auböck family, Carl Auböck IV and his sister Maria Auböck, both trained and practicing architects. They currently produce around 450 objects, but have more than 4,500 in the collection, many of which have become rarities hunted by collectors. Material sourcing and sustainability has limited which objects remain in production. Horn, for example, has become a luxury material, which it wasn’t in the early 1950s, and excellent bridle leather is harder to come by. The Werkstätte Carl Auböck never intended to make luxury products, but strived for quality and uniqueness of materials. It continues to work with Viennese artisans, weavers, and leathersmiths to achieve the quality the workshop is known for. When choosing Auböck designs for relaunch, the company does not make compromises or respond to market demands. Rather, in the words of Carl Auböck IV, “Some products ask to be relaunched, we feel, so we do it . . .”