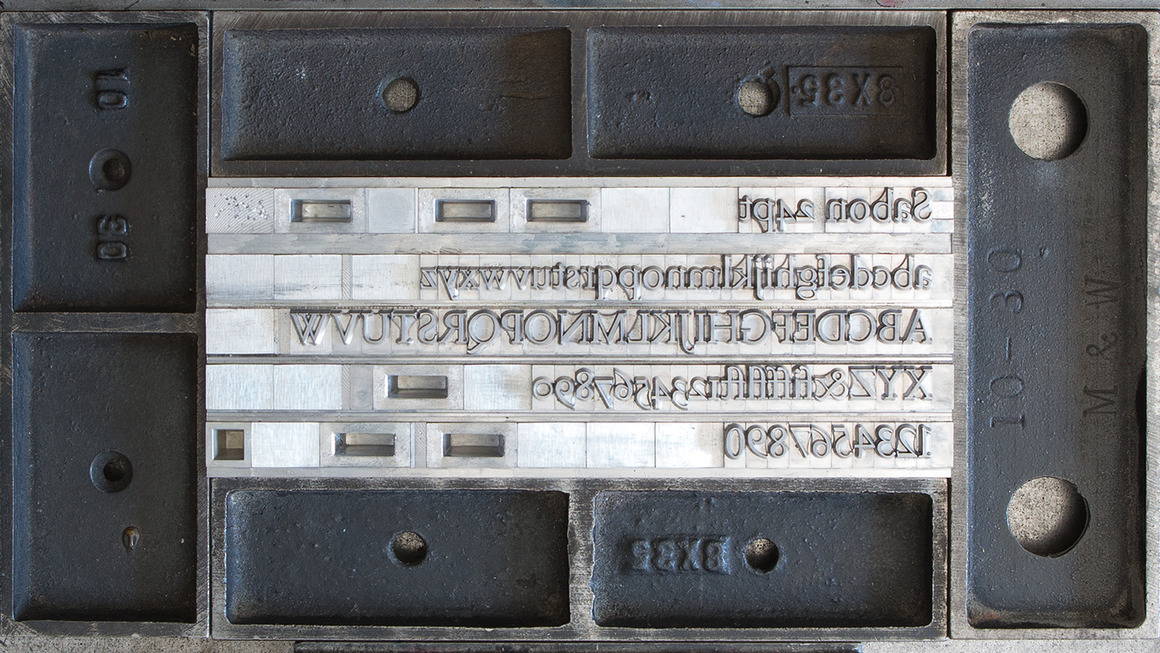 Over the past decade, a form of letterpress printing has seen a resurgence in America. But because this new method calls for plates from digital files, what was once a crucial element of not only good printing but also high-quality design has been almost completely ignored and forgotten—METAL TYPE.

In the early 1970s when photo-offset printing took hold as the new industry standard, print shops across the country began abandoning their letterpress machines and their type. At this time, a small number of fortunate printers, still dedicated to the craft, were able to score quality collections of type for pennies on the dollar before it was dumped, or hauled off to the scrap yard. Sadly, those days (and methods) of scoring type are long gone.

With only a few operating type foundries left in the world with the ability to cast quality typefaces, the process of buying new type is more than challenging. Through research and word of mouth, I learned of Rainer Gerstenberg, who runs the foundry Druckerei R. Gerstenberg, located in Frankfurt, Germany. The foundry has an amalgamation of type matrices from some of the best foundries formerly operating in Europe.

One of the typefaces that Druckerei R. Gerstenberg is still capable of casting is Sabon, designed by the famous typographer, book designer, and philosopher of such matters, Jan Tschichold. This typeface was a missing link in my shop, and well suited to the bookwork I am doing under my publishing imprint, The Brother in Elysium.

However irrational and financially unrealistic it might seem to order a large shipment of custom cast lead type from a foreign country, it was an opportunity I couldn’t pass up. I put in a custom line order specifying the quantities I wanted of each character, in multiple sizes. I chose Sabon in the sizes 10 point, 12 point, 24 point, and 12-point small caps, to best suit the work I envisioned making once this type arrived in the States.

Four weeks later, after running around multiple airports and talking to customs officials, I picked up three meticulously packed wooden crates from a warehouse. Back at my studio, with a close friend, I opened the crates containing the type and it felt as though we were pulling out the lost equation to the letterpress printing process. Someone once told me, “Different is different,” and that concept can’t better explain the power and merit these tools possess compared to today’s digital versions.

If one has the nerve to inquire, and somehow the bread to deliver, it is possible to get some of these amazing typefaces brand-spanking-new. But if one is serious, one must act fast, and put the money where one’s mouth is. One thing the letterpress resurgence did not bring with it was an army of young people looking to take over the dying and commercially unviable world of metal typecasting. As all of the experienced type castors, like Mr. Gerstenberg, with decades of study, training, and experience, retire or pass away, this craft will soon diminish to static museum holdings, collecting dust, out of commission, and out of circulation. From this experience it has become clear to me that now is the time to act in developing a type collection that will take me through this century, and when I’m gone, hopefully take someone else into the next. I can’t think of money better spent.

Jon Beacham is an artist and printer based in Brooklyn, New York.