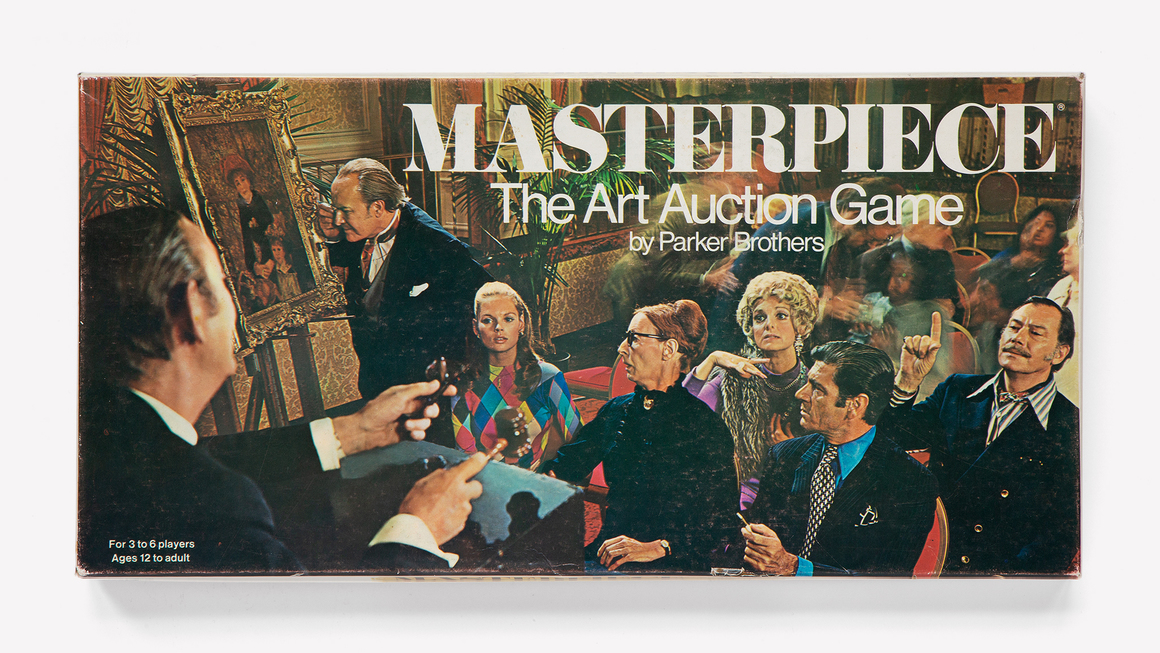 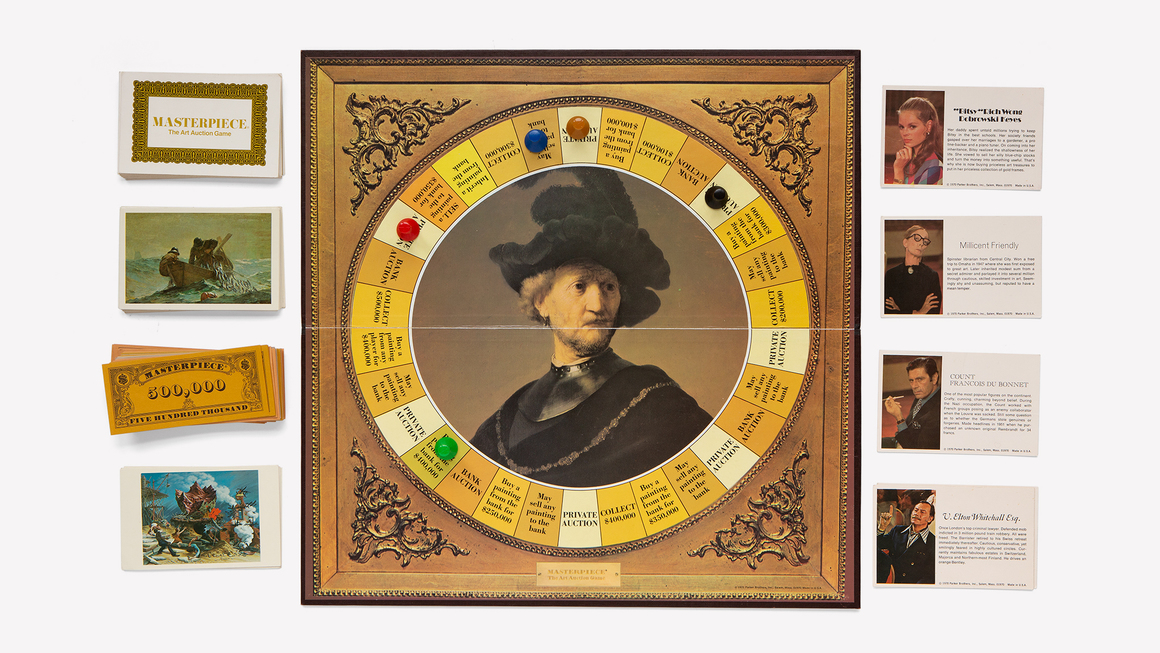 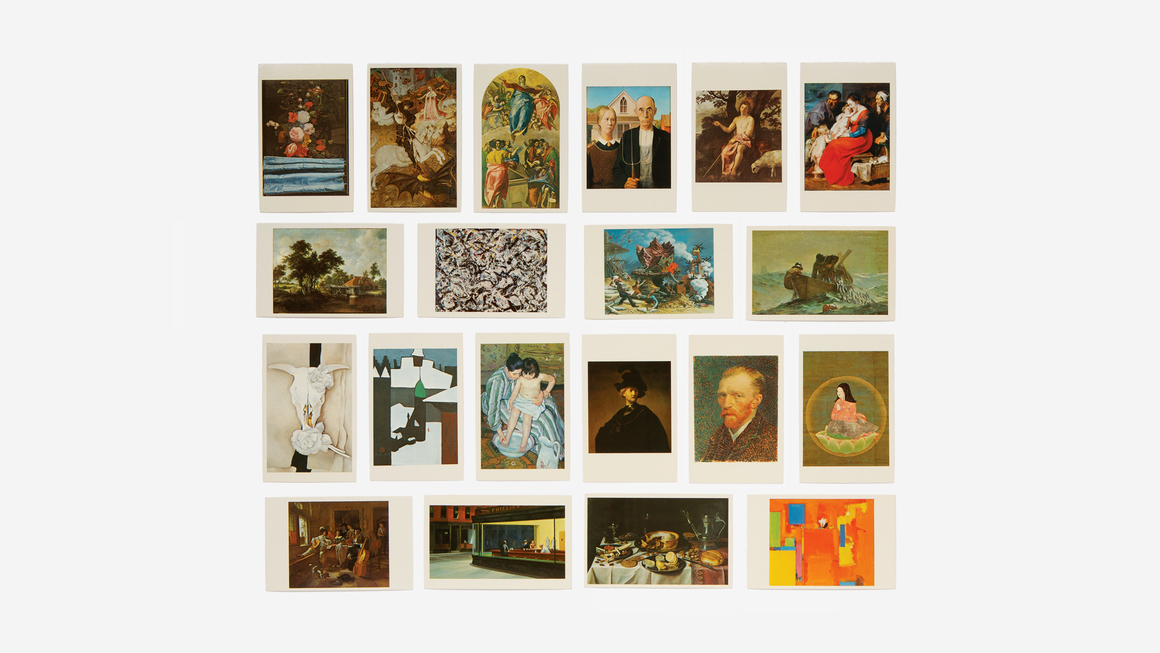 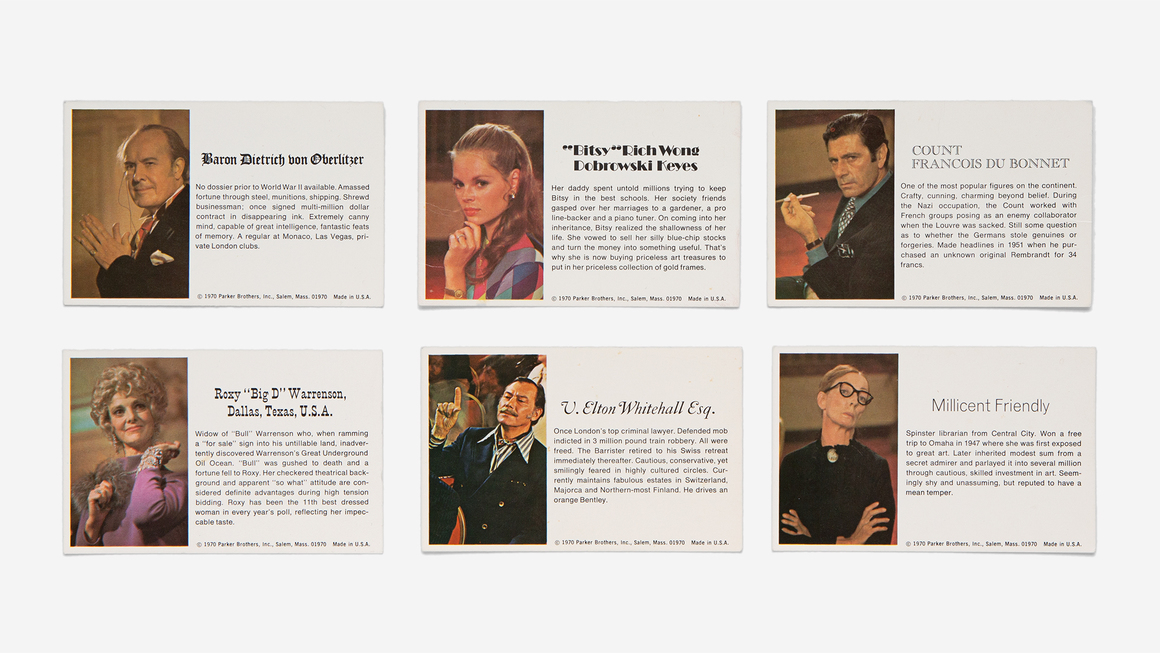 Masterpiece is not that fun of a game. It has a boardgamegeek.com rating of 5.436, which is only an average score. The board game was created by Marvin Glass and Associates, creators of Rock 'Em Sock 'Em Robots and Ants in the Pants, and released by Parker Brothers in three different versions from 1970 to 1996. It is an art auction game in which players compete to acquire famous paintings and faux cash. Players are engaged in a bidding war over paintings—old masters, Impressionists, a Picasso, a Pollock. Painting forever. Mary Cassatt and Georgia O'Keeffe are notably the only women represented in the twenty-four artworks of the game.

The seductive box cover shows the game characters smoking and gesticulating, bidding on a Renoir, but the board inside is rather fuddy-duddy—Ants in the Pants possesses a more direct sculptural, kinetic, humorous art quality, like the spinner game Take Off Your Pants! by artist Michael Smith. A mass-market/high-taste game, Masterpiece includes an awkward social critique embedded in the six identity cards that players can choose from. Each player’s specific motivation for art collecting is described by the character card.

“Baron Dietrich von Oberlitzer,” his name written in Fraktur font, is revealed to be, if not a Nazi, a beneficiary of the Nazi-era black market of stolen artworks, a dark historical footnote that is also referenced in the character “Count Francois du Bonnet,” a French forger. “Roxy ‘Big D’ Warrenson” of Dallas, Texas—described as a flashy oil millionaire with a checkered past and a “so what” attitude toward art collecting—is a Texas regional stereotype combined with the first twenty seconds of The Beverly Hillbillies television theme. At first the characters seem analogous to Clue’s Professor Plum or Colonel Mustard, but these storylines include hidden Swiss bank accounts, mariticide, mean tempers, and multiple marriages.

The descriptions and bios, ranging from creepy to criminal, are intended to transport the players into the mindset of an eager bidder with ill-gotten wealth. Later versions of the game update the Page 6 component to include a Saudi oil sheik, a pop star, and a Greek shipping magnate. The satire dulls with time. The innuendo leads nowhere.

Equally arbitrary are the values placed on artworks. The game equates collecting art with opening safe-deposit boxes—with the top painting valued at a mere one million dollars. The fun is in hoodwinking your opponents, bluffing, and taking note of the asymmetrical information that propels the game. At the Masterpiece auction, neither sophistication, savvy, nor art historical knowledge will give you an edge. Players are punished for pursuing personal taste over strategy and there is even a path to win the game with a collection of cash and no paintings at all.

The venture seems to have been conceived of in a museum gift shop and, most redeemably, it puts a deck of painting postcards into the hands of gamers, familiarizing them with the painting collection of the Art Institute of Chicago. Masterpiece can inadvertently endow a twelve-year-old with the ability to casually identify a Eugène Delacroix from six paces.

In fact, in 1999, a tool-and-die engineer in Indiana realized, while playing Masterpiece, that the garage sale painting he used to cover a hole in the wall might be a work by 19th-century artist Martin Johnson Heade, who is featured in the board game. Authenticated, the Heade painting was quickly sold to the Museum of Fine Arts, Houston.

The museum’s director, Peter C. Marzio, a hardworking Italian American from Governors Island who notably helped the Houston museum acquire oil heiress Caroline Wiess Law’s collection of spirited works by de Kooning, Picasso, Arshile Gorky, and others, outbid competing interests with a “so what” attitude. The museum board deliberated only an hour before allocating the $1.25 million to the Indiana machinist for Magnolias on Gold Velvet Cloth, considered to be a masterpiece.

Travis Boyer is a New York–based artist and educator. 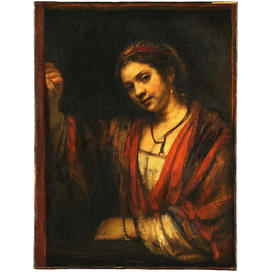 Rembrandt’s Woman in a Doorway
x