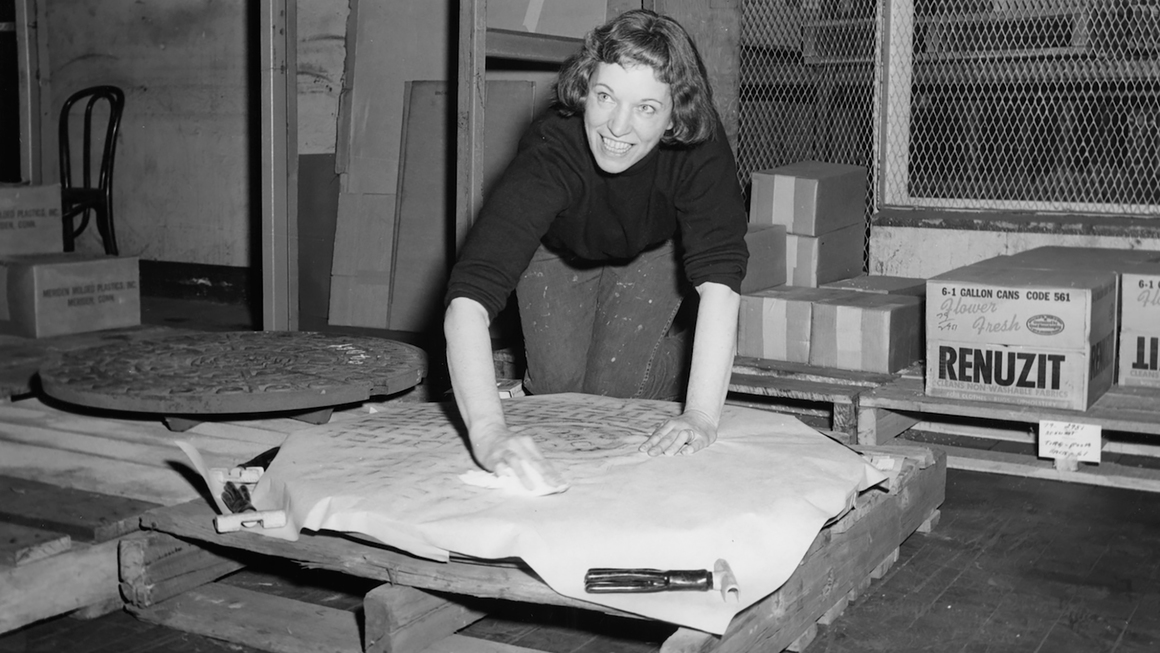 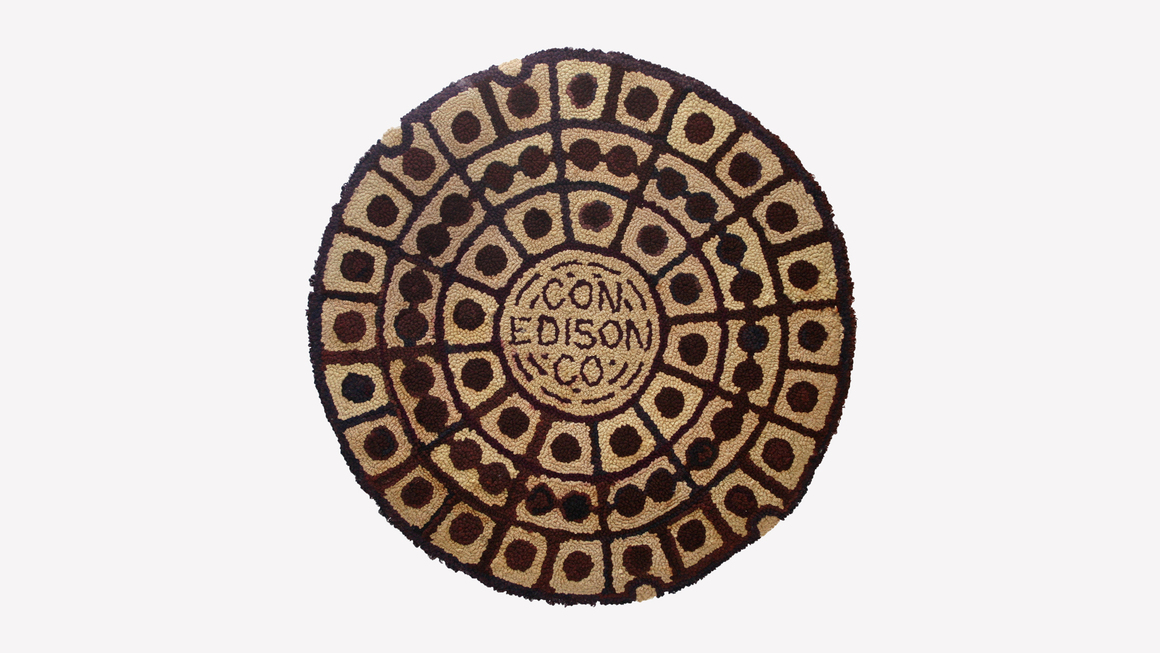 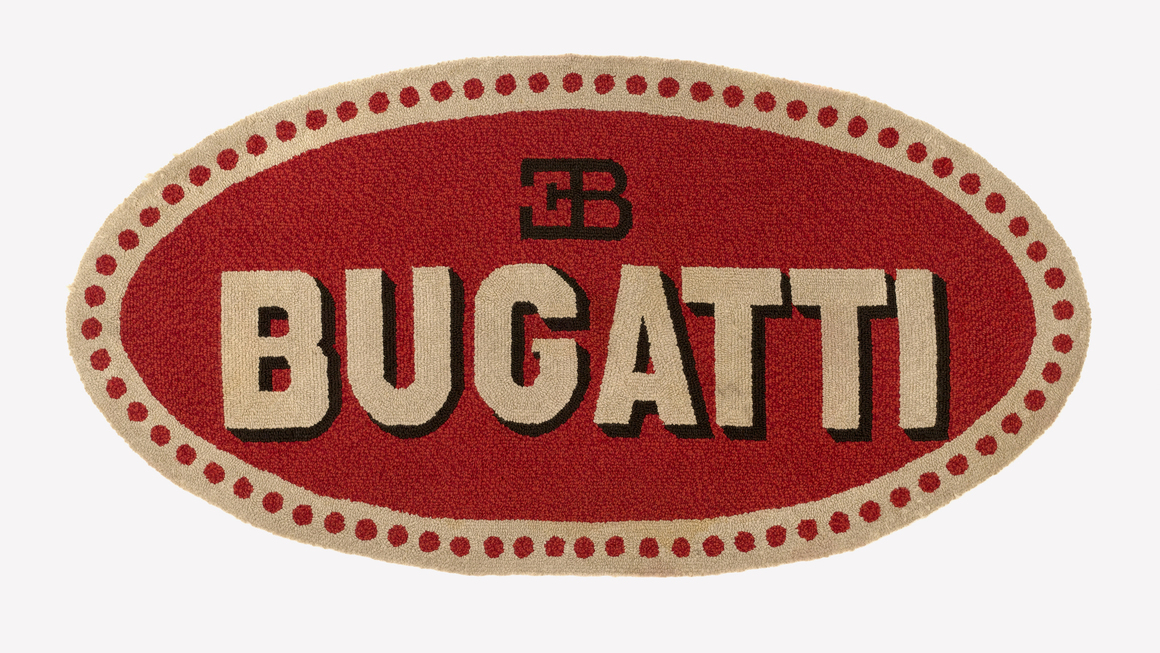 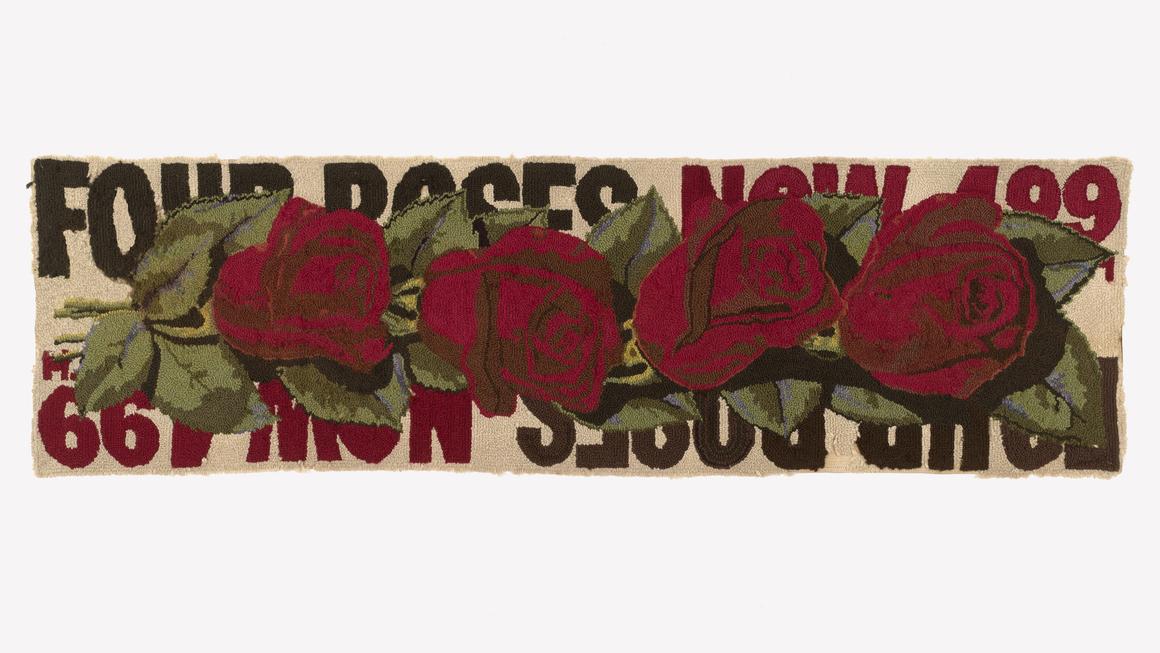 A few weeks ago, I was browsing an auction website and clicked on a thumbnail of what appeared to be a giant Oreo. Enlarged, the image became something more bizarre: a life-sized manhole cover made entirely out of wool. I zoomed in farther to admire its nubby surface: thirty-one by thirty-one inches of expertly hand-tied knots mapped out in rich brown hues—a dead ringer for the manhole covers on my block in Bushwick. I didn’t yet know that the artist, Dorothy Grebenak, was long dead, or that she’d made this piece, Con Edison Co. in 1963, back when Pop Art was new.

Dorothy Grebenak barely merits a footnote in most textbooks about the Pop Art movement, but her story has lately gathered a little steam online, wherein the biggest tragedy of her career is purported to be that her rugs were used functionally—as rugs. It’s undeniable that Grebenak was largely overlooked and devalued in her time. While Andy Warhol and Roy Lichtenstein were scandalizing critics at MoMA with their homages to Mickey Mouse and Campbell’s soup, Grebenak was hawking her wares to the rank and file at the Brooklyn Museum gift shop. As she was a woman working in the “minor” medium of textile, her pieces must have been considered campy rather than subversive. But the central premise of her art practice was almost identical to that of her male peers. Similarly, Grebenak pulled text and imagery from commercial media and translated it into another medium, one that just happened to be more labor-intensive and less critically respected than painting.

Instead of manufacturing her work industrially, Grebenak knotted her pieces by hand. That labor is visible; the hard-edged, branded images she chose as subjects take on an odd, homespun character that is tender and personal. Most handcrafted work requires makers to be intimately physical with the material they manipulate. In textile, this labor is magnified by perpetual repetition. To put this in context: for every halftone dot Lichtenstein slapped onto canvas, Grebenak would have spent at least twenty minutes stitching. Completing a four-foot-by-six-foot rug in her characteristically detailed style would have taken about 200 hours or six weeks of work. That is, if she had been a full-time artist rather than a schoolteacher. For this reason, I was shocked by her assertion (in one of the only quotes ascribed to her) that she thought of her work as “droll.” In an interview for The New York Times in 1965, Grebenak said, “I don’t think what I do is Pop Art. People who name things probably would, but I don’t like labels. […] The idea of a big $5 bill makes me laugh.” If it’s true that Grebenak’s work is irreverent at heart, then the hundreds of hours she devoted to each rug are even more remarkable for having been spent in service of her obscure, vaguely experimental humor.

If Grebenak intended to make the instrument of her artistic, professional ambition into a humble domestic implement—if her rugs were meant simply to be fun and functional—then her willingness to labor so long over them only makes her more enigmatic. Pop Art is an expression of the truly radical idea that there is a kind of divinity inside the most humbly ephemeral objects, and that they deserve to take their place as fine art. But Grebenak took this idea a step further. Rugs inhabit a lowly zone, and the condition of their surface (usually covered with dust and grime) is a reminder of our grisly physicality. Grebanak’s floor rugs reflect the austerity of public urban life, whether represented by a taxi driver’s badge, a payphone dial, or a manhole cover. While plush versions of these objects would have appeared avant-garde in a gallery context, their presence within the cozy confines of The Family Home would have been unexpected, delightful, or downright bewildering; by eschewing the impersonal environments of galleries and museums for the quiet intimacy of private interiors, she more effectively practiced the populism that her Pop Art contemporaries preached.

The fact that Grebenak was successful in collecting the ragtag images and cloying maxims of ads and reframing them as decoration speaks to how tame, acceptable, and perhaps even beloved this type of imagery had become in the postwar era. Presented in this format, these commercial compositions could be appreciated for their essential beauty, subtle patterning, and symmetry—without being weighed down by the pedantic baggage of “high art.” Grebenak took these ordinary objects, faithfully commemorated them in wool, and then blithely sold them back into domestic servitude. If we accuse the Pop Art painters of worshipping false idols, Dorothy Grebenak’s message brings to mind a certain bible dictum that doesn’t escape an uncanny connotation: “all are of the dust, and all turn to dust again.”

Oona Brangam-Snell is a New York–based textile designer and artist. 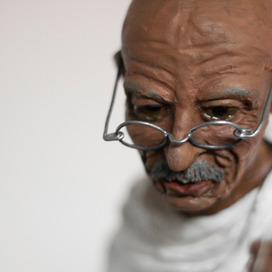