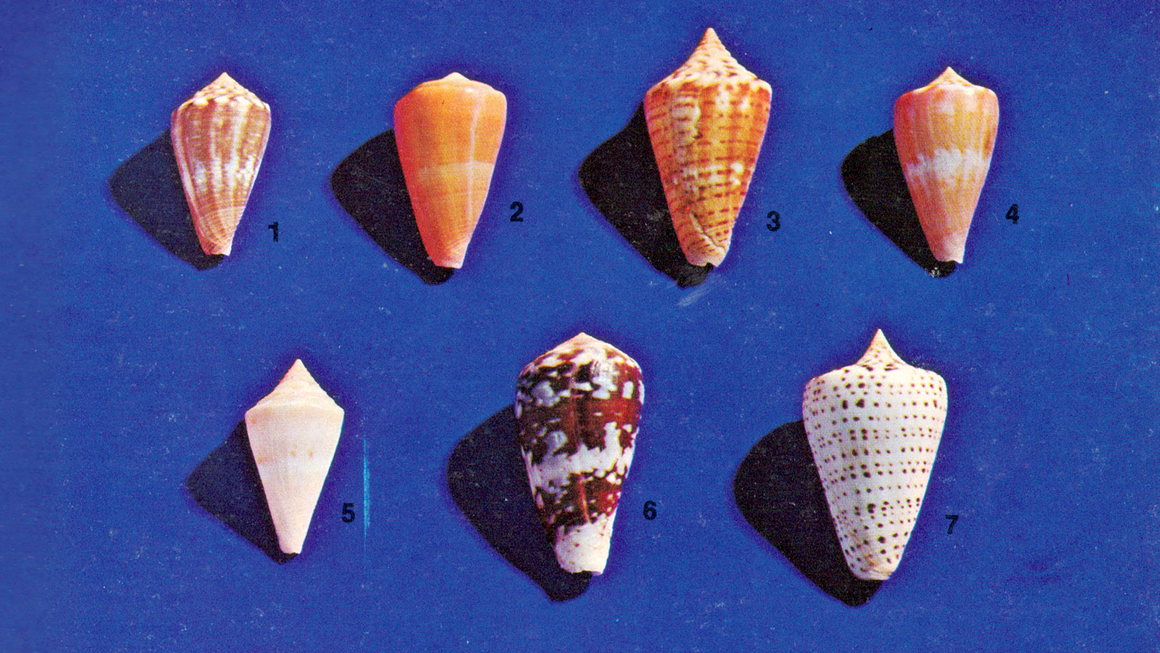 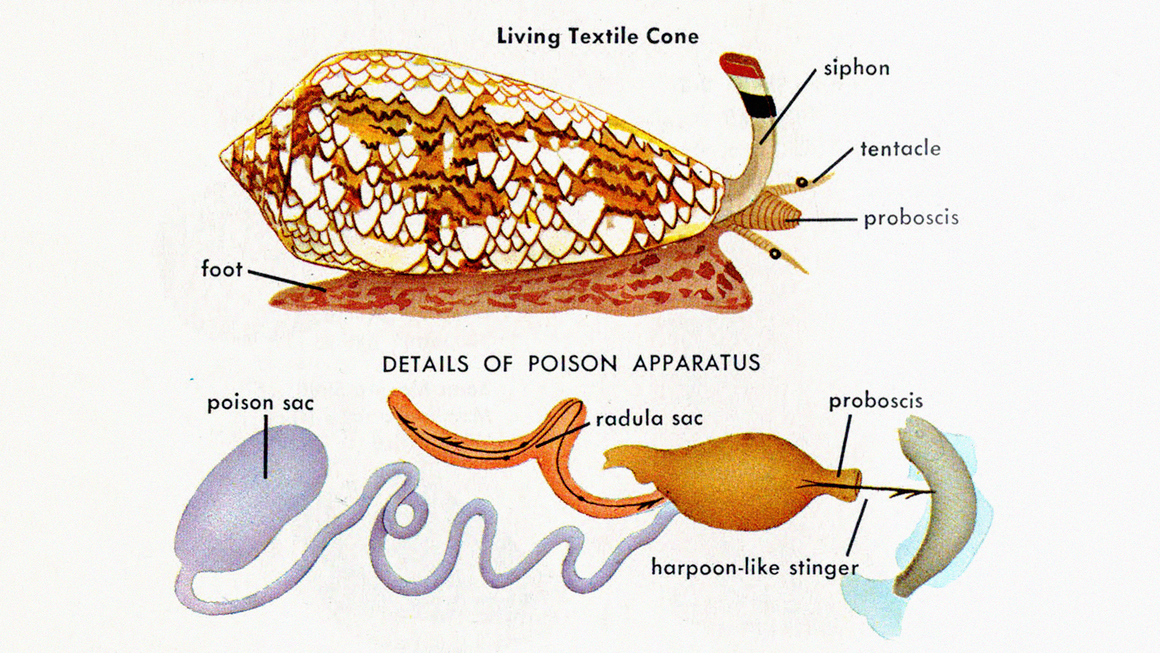 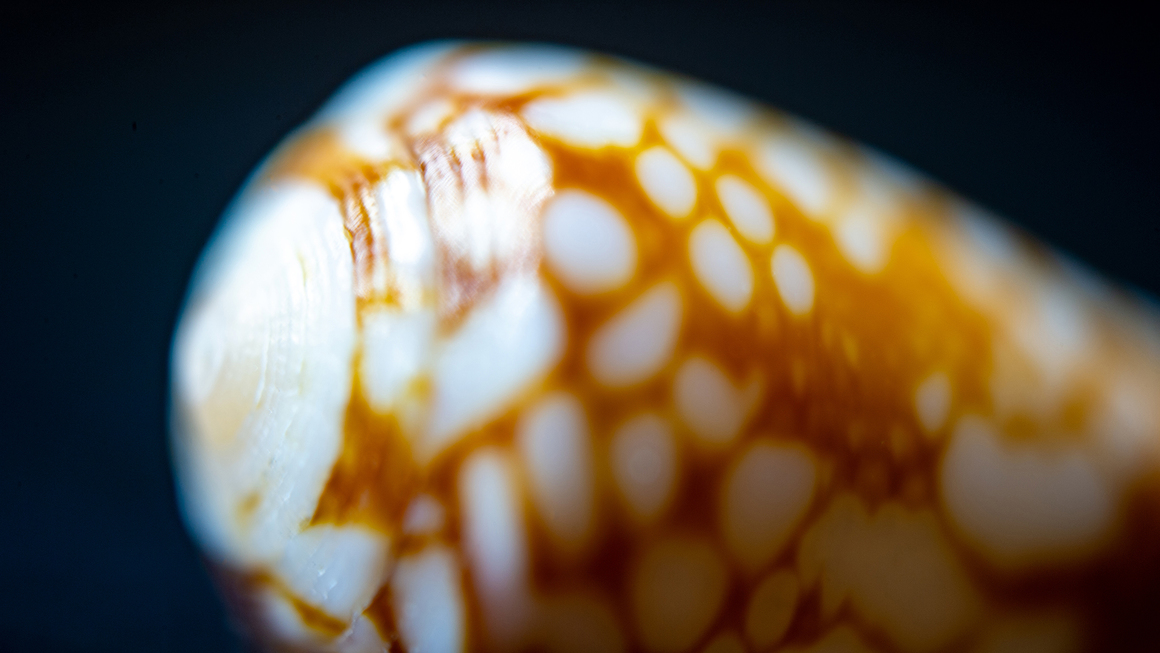 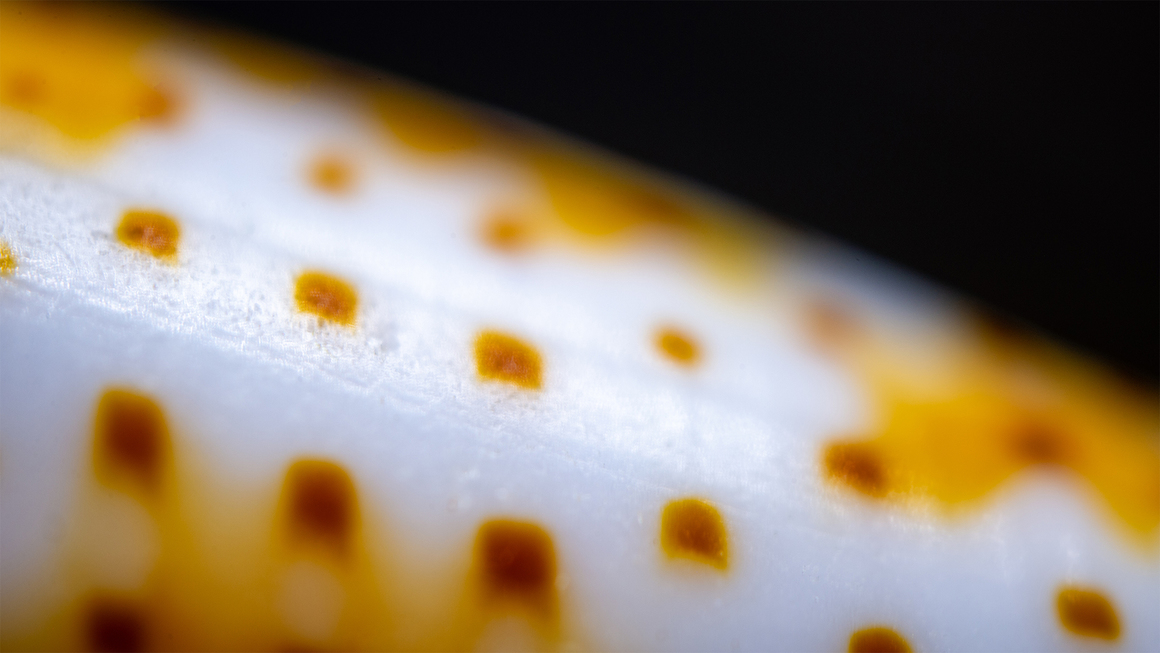 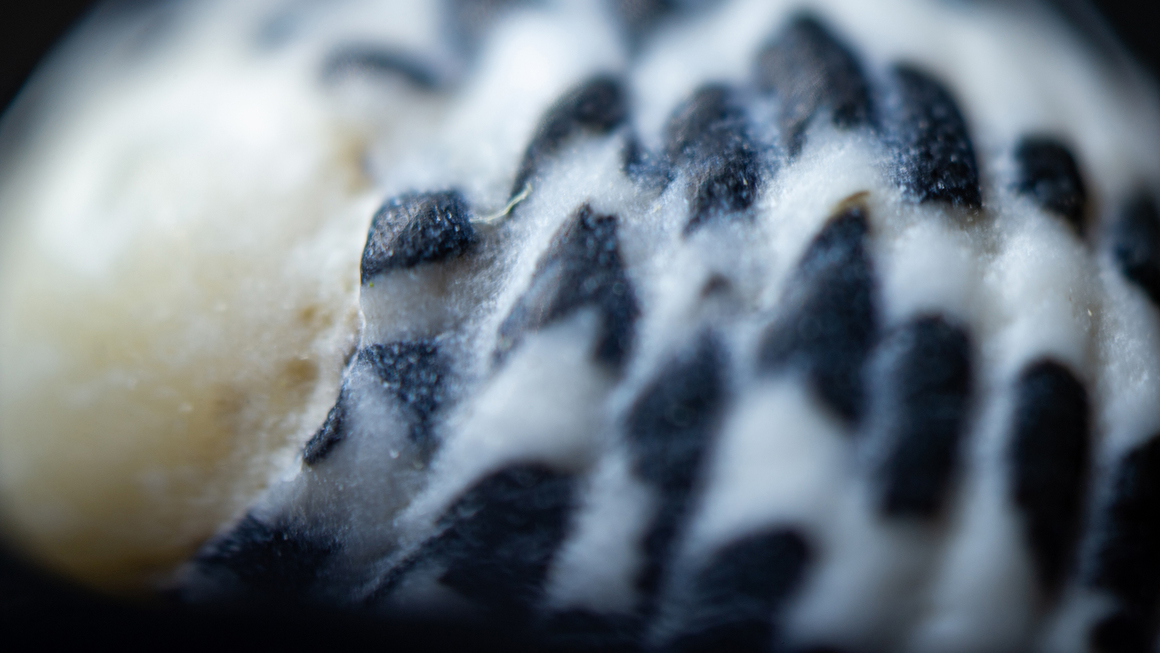 When I was around ten years old, a friend of my parents—a dentist from Santa Cruz whose hobby was collecting rare seashells—took me snorkeling off the North Shore of Kauai. His credentials boasted a seashell collection so beautiful that it was kept on display in his office’s waiting room, and so valuable that it was eventually stolen. We were looking for textile cones (Conus textile). What he didn’t tell me was that just one of these predatory mollusks carries enough venom to kill dozens of humans. Similar to snakebites, reactions to their neurotoxin include muscle paralysis, respiratory failure, cardiovascular collapse, and even coma (if one makes it out of the water without drowning first). There is no known antivenom.

We looked for their tracks: wavy lines that end abruptly. A textile cone’s strong muscular foot trawls its carriage forward and helps it burrow from plain sight, leaving behind mysterious drawings in the sand. That day, the ocean floor was an auspicious palimpsest, a field of scribbles that promised fruitful hunting. I treaded water, scissoring my legs, gently fanning my flippers over one of the trails. As the sand plume dispersed in the current, a shell was revealed. The dentist assured me that as long as I picked up the shell correctly—on the back, avoiding the narrow end where the hypodermic-like barb emerged—I wouldn’t get pricked.

Humankind has both derived meaning from, and ascribed meaning to, seashells for thousands of years. Shells have served as symbols of femininity, protection, and independence as well as objects of monetary and—as paragons of mathematical precision—even intellectual value.

We humans can attribute at least some definitive purpose to the remarkable shapes and structures of shells, but as theoretical developmental biologist Hans Meinhardt stated, “the functional significance of pigment patterns in shells is not clear.” We have long been seduced by their inexplicable decorations.

Textile cones, penniform cones, episcopal cones, retiform cones, marbled cones, and striated cones all feature similar embellishments—tiny oblique lines that travel perpendicular to the shell’s mouth, splitting and branching in two at varying intervals. Even to a ten-year-old, this pattern looked “mathy”—a horizonless, infinite mountainscape lined in the luminous amber pigmentation that seemed (and, in a way, was) printed onto the calciferous substrate by the gooey mollusk.

In 1983, the tent patterns of these cone shells were attributed by scientist Stephen Wolfram to a set of specific mathematical rules. The mollusk’s method of generating pattern, via pigment cells that are either activated or suppressed neurologically, is known as a cellular automaton: the expression of commands that dictate two possible states (for example, true or false). The state of one cell and its neighbors on either side dictates the state of the following cells generated, and so on, building a pattern ad infinitum.

Cone shells grow along the edge. The snail secretes calcium carbonate, both plain and pigmented, from its mantle (body), which accumulates in layers over its lifetime, rolling out in a conical form as it grows. That the shell is grown and decorated in this manner, along its opening, draws direct parallels to Boolean machines like looms or dot-matrix printers that create grid-based patterns one row at a time. Perhaps this is where the textile cone got its name, as well as its alternate moniker, the cloth of gold cone. The way cellular automata patterns develop over time is also used by scientists and physicists to model some of the most complex and chaotic systems on earth, such as cloud dynamics, economic markets, river formation, and population growth.

That day with the dentist, and on every subsequent snorkeling trip, I felt a burst of the sublime—awe tinged with fear—while I studied my find, treading water, squinting through fogged goggles, before returning each snail to the sea floor. Did we invent math or did math invent nature? The shells of these snails, emblematic of both great beauty and great danger, contained vast philosophical ideas within their patterns, microcosms of our world just scooting around in the sand.

Daniele Frazier is an artist based in Brooklyn, New York.