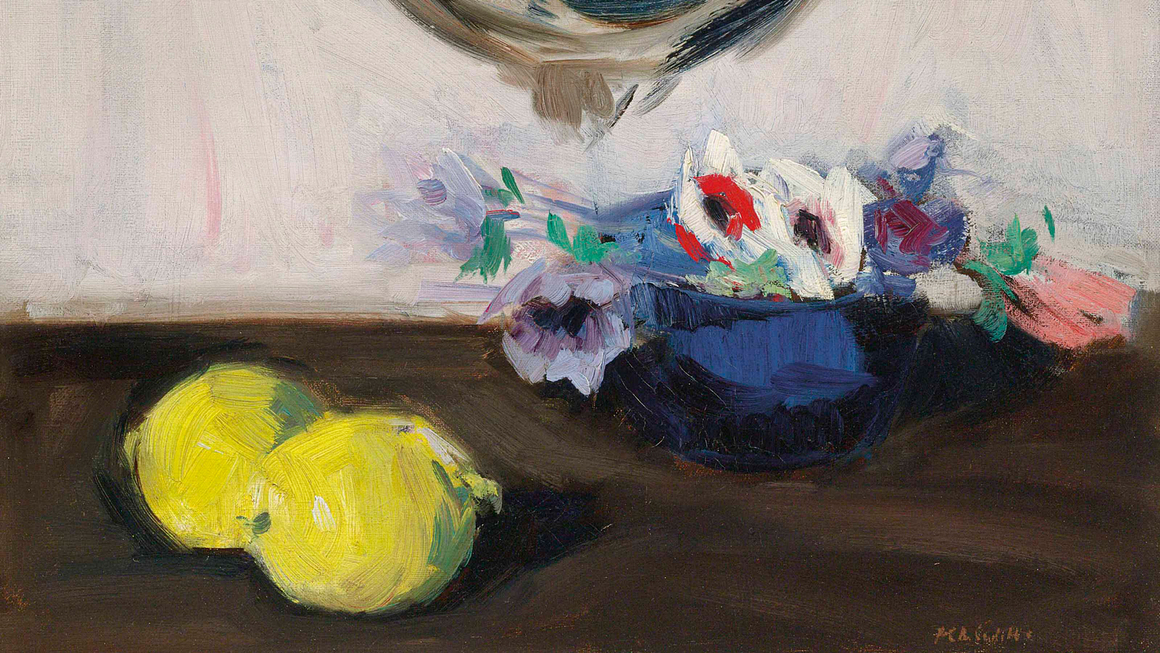 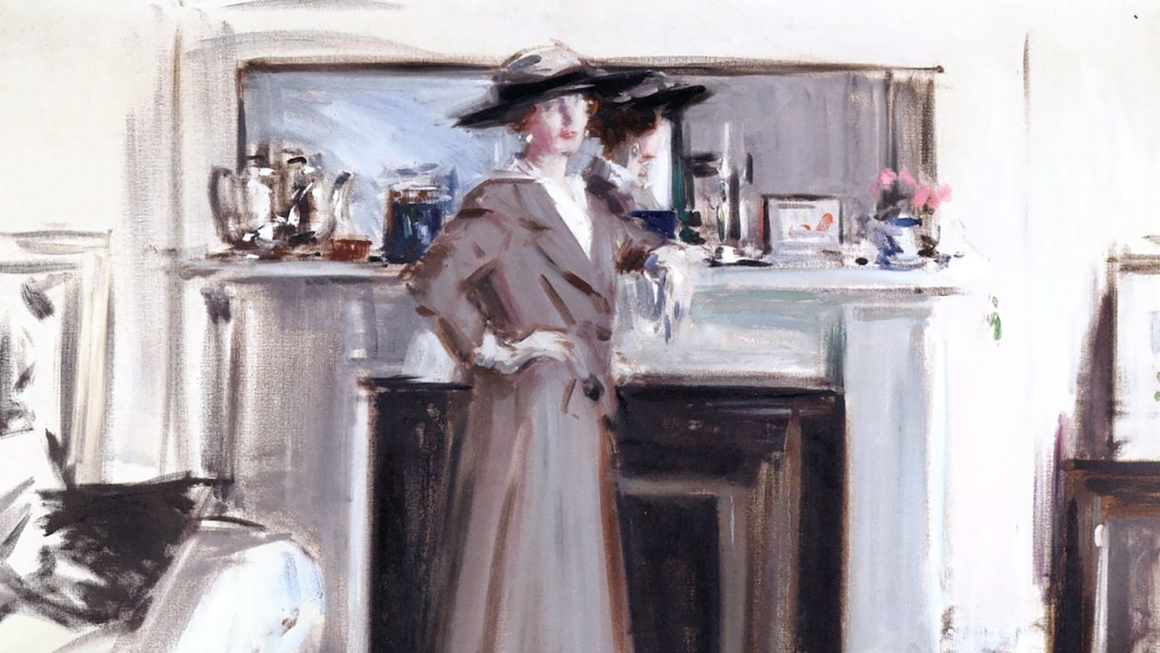 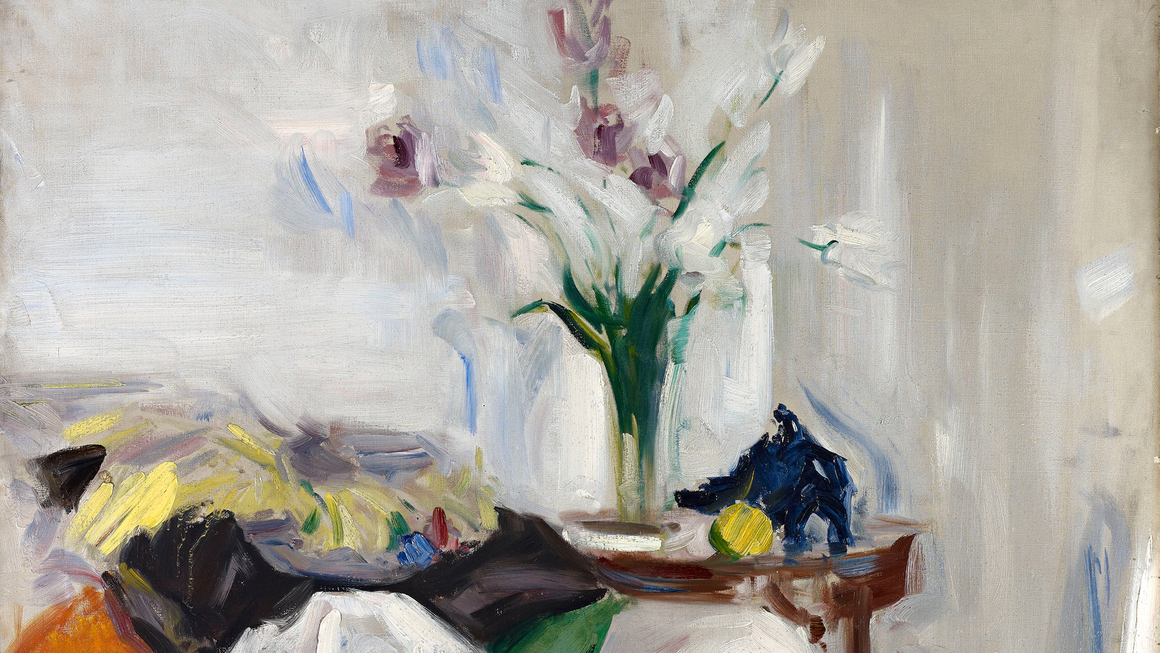 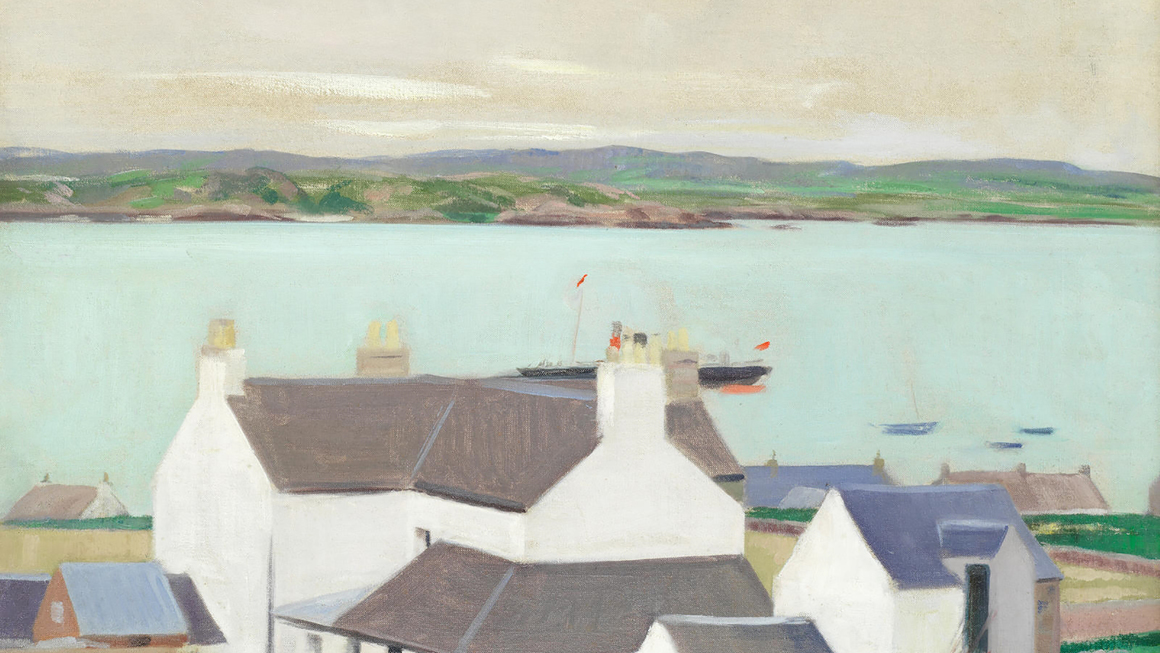 F. C. B. Cadell (1883–1937) could paint a tabletop still life of a porcelain tea service, a lady’s folding fan, and perhaps a closed book, with almost diabolic panache. His crisp modern handling, whether of velvety, vivid swatches, or buoyant dashes of color, often betrayed a moody counterpoint in his arrangements; a kind of foreboding—oblique and seemingly extraneous—that frequently accompanies images of authentic glamour. In his decorative, chromatic, and dandy absolutism, he was the painter who bridged the mystery and ephemerality of James Abbott McNeill Whistler with the graphic splash of Henri Matisse.

Cadell’s flushed descriptive manner was for the most part applied to the seemingly tepid and unemotional subjects of the interiors of Edinburgh’s bourgeois homes, predominantly the variously arranged contents of his own drawing room. But there are other pictures in his oeuvre, private ones, in which style and subject matter align in their temperament and begin to allude to the ruling passions of the artist thought of as the flamboyant bachelor among the Scottish Colorists. For example, a male figure on the seaside, painted almost naked and sun-soaked into oblivion, save for his vermillion slip (one of Cadell’s favorite hues), that appears to hover in midair may inspire a further reading of the drawing room pictures. The effect of Cadell’s art is similar to that of the Anglo-Irish writer Elizabeth Bowen, whose novels from the 1930s and 1940s describe the gravely intelligent and expectant hearts of women and children hemmed in by the polite society they inhabit; stories of “life with the lid-on,” in Bowen’s words. Well mannered, they nevertheless exude the energy of thrillers.

While a Scottish painter to his core, Cadell studied in Europe as a very young man at the turn of the century. Before he brought his talent home to stay, a benevolent patron sent him to Venice for a commission. Far beyond the confetti-like paintings of Florian’s café he made in situ, it was the city’s reflection—the water’s hallucinogenic mirroring of the artifice above—that provided the real fascination and a motif he would return with and continually eke out over his short lifetime. Cadell enjoyed the financial success that invariably greets the early work of a suave painter, though World War I and several gruesome years spent in trenches held his art in abeyance. Afterwards, he resumed a dandy figure en force (bold check suits, yellow waistcoat, kilts, buttonhole). As if to further rid himself of the trenches, he established a home and studio at a chic address and fastidiously decorated. He polished its black floors to an exceptionally high gloss, like the aqueous dark glass of Venice canals at night, until they reflected a Louis XV chair, Regency divan, or simple vermillion dining chair appearing to skim the surface like water beetles, revealing another world below without settling into the familiarity of domestic rooms. His Spartan arena—bare lilac walls and an austere mantel, opposed by a heavy chandelier or a few narratively placed objects of dress (a cloak, or an opera hat laid on a chair)—remains hermetic and potent, however analogous they are with luxury décor today. Cadell’s cloisters were both laboratory and mis-en-scène for his painting. They were aesthetic just as they were neurotic, and their ineffable superficiality was the product of a hidden motivation. Queer theorist Eve Kosofsky Sedgwick has written about the particular, almost violent impact of silence, declaring it to be the speech act of the closet—a silence that resounds in Cadell’s art.

Cadell suffered a reversal of fortune, downgrading his addresses in quick succession until he was effectively homeless. He died at fifty-four and left everything to Charlie Oliver, his loyal manservant (and seaside model), who’d lived with him since the war. The authors of Cadell’s monographs, including those from the last decade, see no “hard evidence” to assume details of his private life, something that the amalgam of his oeuvre—arch society hostesses in imposing jet-black hats; a naked boxer, alabaster skinned except for sunburnt face and hands—apparently cannot sufficiently provide. Having lived in an era of criminalized homosexuality (he was twenty-two when Oscar Wilde’s De Profundis was published), it is a testament to Cadell’s powers of implicit suggestion (the most ancient of the gay arts) that his personal élan, as historians prefer to call it, and other soft evidences remain bound in his expert trappings.

Paul P. is a Canadian artist living in Toronto.