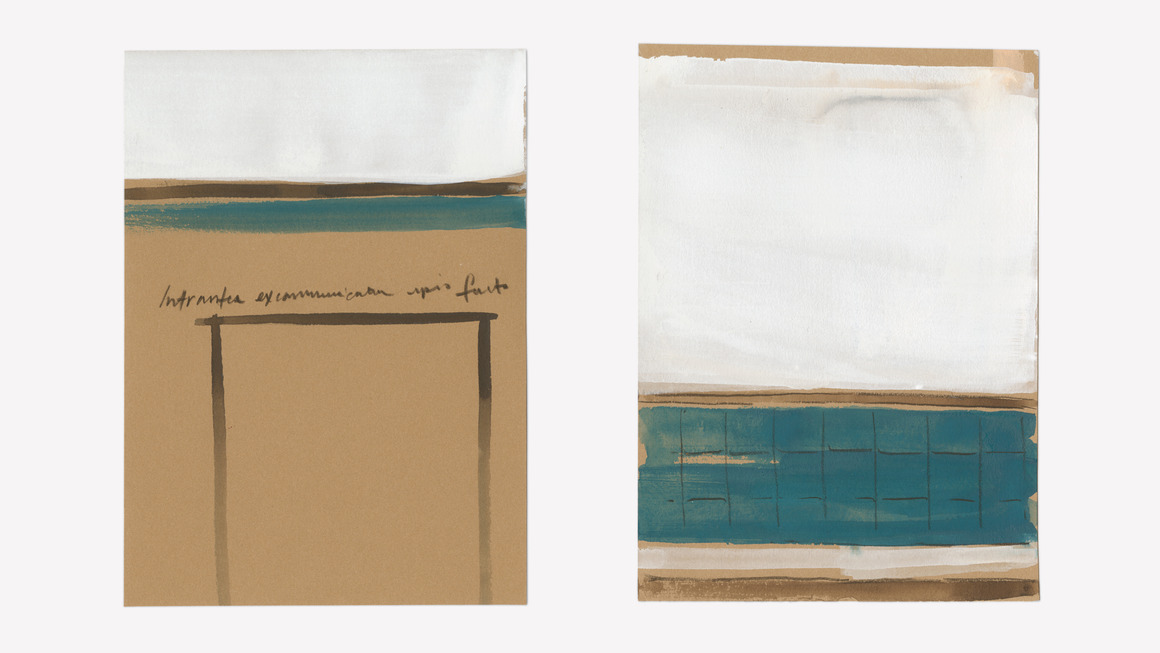 Just as cultures are altered by the landscape in which they come to dwell, so too, in the course of a short lifetime, did Frederick Rolfe (1860–1913) by the extreme principles of his mental atmosphere (the only air that his person could stand to breathe) find transformation, metamorphosing from a piano maker’s son into the arrogant self-styled Baron Corvo.

In Hadrian the Seventh (1904), his novel of fantasy, Rolfe appears as the hero and ascends from London squalor to the papal throne, uniting the world momentarily through wild acts of charity, radical diplomacy, and aesthetic reform, all of which lead to his ultimate martyrdom. In reality, he routinely petitioned and was roundly refused priesthood. Denied the succor of ecclesiology, Rolfe became a penniless decadent who, if ever he found remuneration for his work, would spend it entirely on excesses and then promptly return to starvation. He either slept under the bridges of Venice or was skimmed along its canals rowed by four gondoliers, in the fashion reserved for royalty. Venice was his place of self-imposed exile. In proximity to the Vatican and among Italian youth, it was far away from the feuds and financial ruin left behind in England. It was the city for his imagination and he was a chronicler of its secret homosexual libertinism, vainly trying to pimp its dream in turgid letters sent to men back home. Rolfe was one of a type of rebel artist who, vociferously entitled and convinced of his greatness, painfully felt the failure of the world to align with his own self-image—a schism that yielded elaborately beautiful art, but also a fight to the death. Whether in poverty, or in brief fictional riches, his intransigence and contradiction of society remained the same; his actions were ruled, always, by the priority which his temperament held over his earthly circumstances.

The passage from Hadrian the Seventh that follows, adroit and prickling with self-assurance, describes the author’s meticulous vision for an interior. Here, Hadrian commands the redecoration for the papal suite, shunning grandeur for aesthetic simplicity and nuance which, 110 years forward, we recognize, spatially and materially, as compatible with the last century’s best in design theory, chiming with the clean luxury of Syrie Maugham, Jean-Michel Frank, and the utility of Bauhaus. His stream of unerring, innate taste barked out in a modern dictum is a harmonious design for living; humane, hygienic and unsuperfluous, and organized and adapted here to emphasize the pointed effect: “Now, let Us furnish these rooms.”

Cover all of the walls and ceilings with brown-packing paper—
yes, brown packing paper.
Stain all of the wood-work with a darker shade of brown.
The gilding of the cornices can remain as it is. No carpets.
These small greenish-blue tiles are clean; and they soothe the eye.
You may hang voluminous linen curtains on the doors and windows, and without borders.
Furnish all those antechambers with rush chairs and oaken tables.
Remember that everything is to be plain, without ornament.
Let Us have a couch and three armchairs,
all large and low and well-cushioned, covered with undyed leather.
Get some of those large plain wooden tables which are used in kitchens.
Put writing material on one of them, there, on the right of the window.
Leave the middle room empty.
Put three small book-cases against the wall and a cupboard here.
Make a bedroom of this room.
Let the bed be narrow and long;
and let the back of the head be toward the window.
Put one of the large wooden tables here and a dozen rush-chairs.
Line the walls of this room with greenish-blue tiles,
like those on the floor.
Put several pegs on both doors.
Let a water-pipe and tap project rectangularly two feet from the wall.
Yes. Six feet from the floor, two feet from the wall; and let there be a constant and copious supply
of water—rain-water, if possible.
Get two plain oil-lamps for each room, with cooper shades:
large lamps, to give a very strong light.
Paint over both doors of the bedroom,
on the outside of each, Intrantes excommunicantur ipso facto.
Let Us have a plain stone altar and the stations,
and the bare necessities for mass, all of the simplest.
Let everything, walls, floor, ceiling, everything, be white—natural white, not painted.