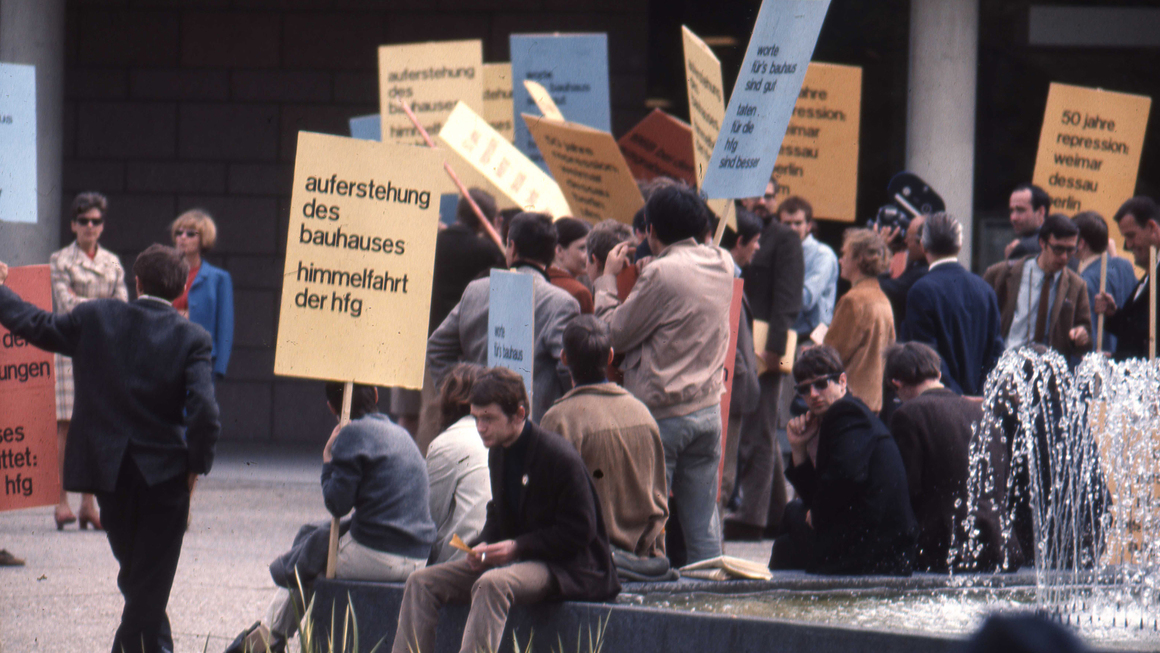 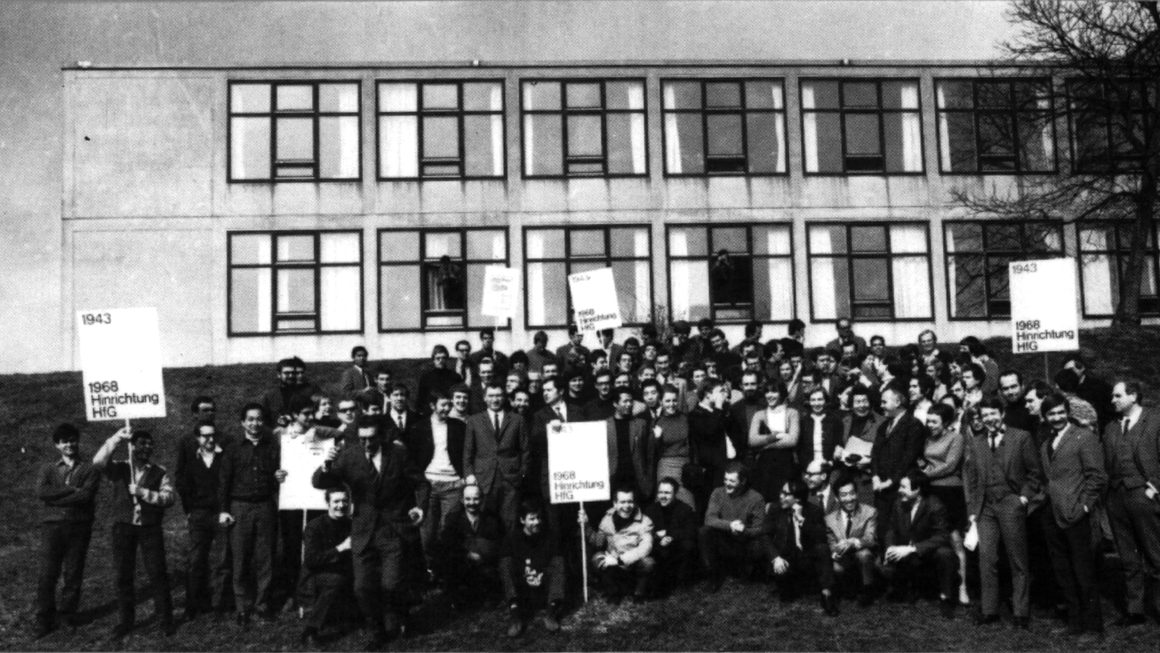 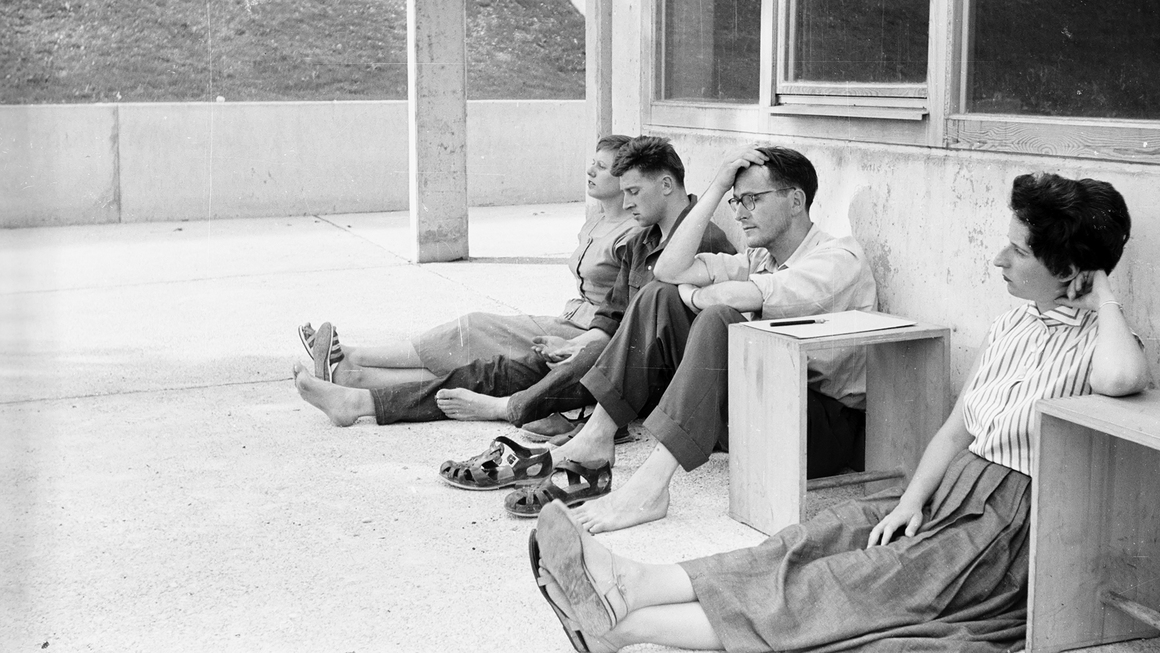 One of my favorite chapters of design history is the iconography of political protest: from the raised fist—which has signified strength in the face of oppression for over 5,000 years, since its association with Ishtar, the ancient Assyrian goddess of love and war—to Black Lives Matter and the simple red ribbon worn by AIDS campaigners.

Yet few political protests have deployed the formal aspects of design with such aplomb as the students of the Ulm School of Design in West Germany, when they campaigned against its closure in 1968. During the students’ fight to save the school and its vision of design as a tool of social and political progress, the placards they made were meticulously planned and executed in terms of size, shape, color, and typography.

The threat of closure followed years of political strife at the Ulm school, which was founded in West Germany’s industrial heartland in 1953 by the architect Max Bill with the peace activist Inge Aicher-Scholl and her husband, the graphic designer Otl Aicher. All three were committed to creating a design school that would champion a progressive approach to design, as the Bauhaus had done in the 1920s, yet each of them had a different vision of how to do so.

Bill, who had studied at the Bauhaus, sought to replicate that institution in his dual roles as the architect of Ulm’s building and its founding rector. But a year after the opening in 1955, he resigned under pressure from fellow teachers, who considered his methods outdated. Led by a new rector, the Argentinian design theorist Tomás Maldonado, Ulm adopted a systematic approach to design that embraced rigorous research, planning, semiotics, and the testing of every element of the process, as if it were scientific research. The “Ulm Model” was put into practice in collaborations with prominent German companies, including the electronics manufacturer Braun and the airline Lufthansa. Those design programs are still hailed as models of late 20th-century corporate design, yet Ulm’s students were also encouraged to apply the same principles to social and political challenges, and to explore design’s ecological impact.

Artists and intellectuals flocked to the school to see the “Ulm Model” in action. But by the early 1960s, Maldonado and Aicher were battling against an increasingly powerful group of students and younger teachers, who called for Ulm to abandon its corporate collaborations and to focus on theoretical research into design’s role in society and the environment.

This was the last straw for the conservative politicians who had long considered Ulm’s intensive teaching methods to be unjustifiably expensive, particularly as it had fewer students and a higher proportion of foreign ones than other West German design schools. Ulm’s critics were also alarmed by its reputation for subversion amid mounting paranoia about the burgeoning youth protest movement in the thick of the Cold War. In December 1967, the regional parliament of Baden-Württemberg announced that it would stop funding the school unless it merged with a local engineering college.

As the conflict escalated and Ulm’s financial situation deteriorated, the students and staff staged sit-ins, teach-ins, and demonstrations against the threatened merger. All of their protests were planned to be as memorable as possible, not least in the visual impact of the placards on which the Ulm activists argued their case in a carefully chosen palette of colors and the lowercase letters of a spruce sans serif typeface.

Every element of those placards exuded the clarity, precision, and consistency of both Ulm’s corporate assignments for Braun and Lufthansa during Maldonado’s rectorship and the Bauhaus graphic style favored by Bill. When the protestors learned that an exhibition on the Bauhaus in Stuttgart was to be opened by that school’s founding director, Walter Gropius, on May 4, 1968, they organized a demonstration outside, clutching placards that likened Ulm’s plight to the Nazis’s assault on the Bauhaus. The May 1968 student protests in Paris had begun two days before. The 83-year-old Gropius found himself addressing the demonstration through a loudspeaker as an improbable recruit to the youth protests, which were erupting across the world.

Alice Rawsthorn is a London-based writer on design. She is the author of Hello World: Where Design Meets Life published by Hamish Hamilton. Her next book, Design as an Attitude, is to be published by JRP|Ringier in spring of 2018.