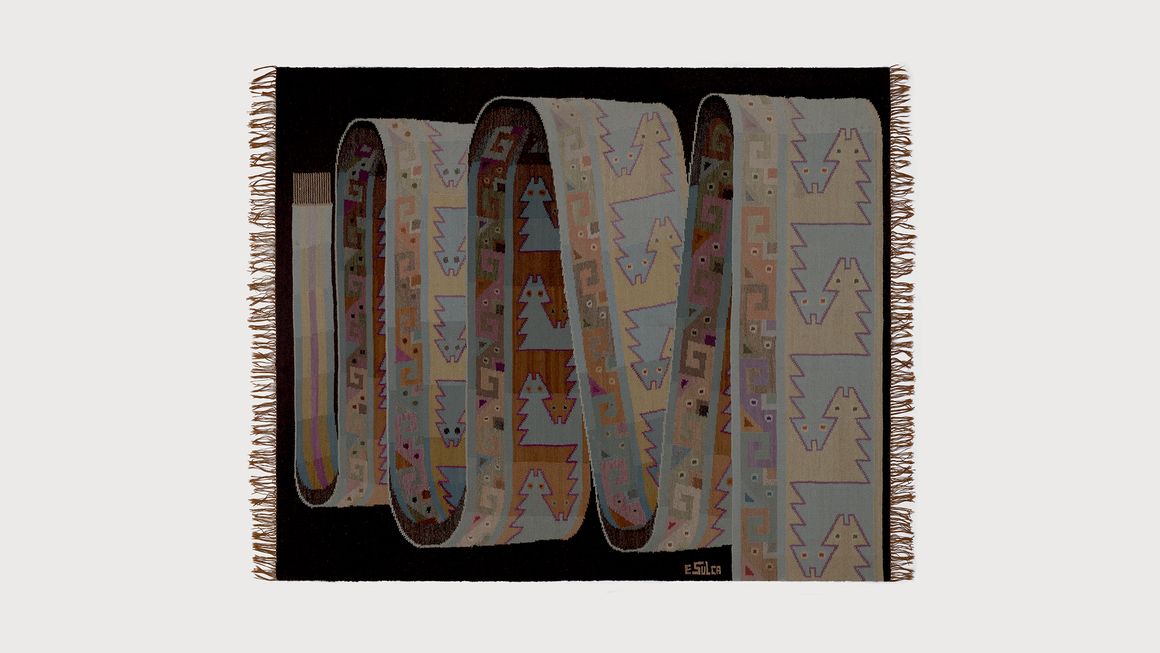 The 3D Weavings of Ayacucho, Peru

The three-dimensional weavings of Ayacucho, Peru’s Santa Ana neighborhood employ a reclaimed technique called punto arwi—a unique approach to the artform that allows the creation of identical designs on both sides of the material. Bridging vibrant imagery and meticulous technique with each design, the weavers create domestic-scale tapestries that reside somewhere between illusion and reality; each textile is simultaneously optical and symbolic, drawing from ceremonial Wari and other pre-Incan textiles—sacred data remain intact, alive within each weave through vivid animation and dense constructions.

Ayacucho, known as Huamanga until the 1820s, is both a celebrated hub of artesanía and a polestar of revolutionary thought and action. The culturally rich, ancient center of Wari (600–1000 CE), in present-day Peru, and its eponymous people created some of the most exquisite textiles in the country; these works are noted for their geometric abstraction, tonal variation, compositional density, and detail. Among them, the Ayacucho tapestry renders a world within a world: an ancient textile depicted three-dimensionally, often in motion, waving, flaunting its muscular and multidimensional folds and flanges within a flat woven field. This playful vibrance makes it seem as though ancient Wari designs are saying, “I’d flex, but I like this tapestry too much.”

The city of Ayacucho lies halfway between coastal Lima, Peru’s modern-day capital and the world’s second-largest desert city after Cairo, and the mountainous, ancient Incan city of Cuzco. The mule train of rebel hero Túpac Amaru II (after whom the American rapper Tupac Amaru Shakur is named) trod this path. It is the site of many important colonial rebellions, not the least of which the battle of Ayacucho—part of a sanguinary fifteen-year civil war (1811-1826) that led to Peruvian and ultimately South American independence. And while the precise genesis of the city’s three-dimensional weavings is difficult to poinpoint, it is likely that the Sulca family—Ambrosino Sulca, Alfonso Sulca, Gregorio Sulca, and Edwin “Eddie” Sulca—ultimately secured the craft’s visibility and integrity by elevating it to the status of art.

In the 1950s, traditional Peruvian weaving and dyeing techniques were reclaimed by the patriarch of the Sulca clan, Ambrosino, while former methods that had been used since colonial times—involving wooden shuttles and the industrial dyes—were abandoned. The warp of the loom was infused with small colorful bundles of yarn coined huanquillas, whose color variation and grisaille is not generated by simply diluting dye lots. Certainly cochineal dye lots in coffee cans whose colors range from blush to cotton candy to lipstick to raspberry jam are part of the process, but, more importantly, tonality itself is a historic cultural assertion linked to the agricultural and biological heritage of the Andes, where dozens of shades of alpaca have been bred over a millennium.

The tones and shades of the huanquillas are generated both from dye color variations derived from local vegetation and the base color of the animal fiber. Consider the extreme diversity of potato species in the Andes, which thwarted blight and famine, and you can imagine how this intricate tonality relates to a broader Andean technology. Optical illusions, then, which result from this nuanced spectrum of primary material, come as no surprise. Reviving these traditional techniques allowed for a highly specific tonal range and dimensionality within the work, and ultimately the continuation of a fundamental cultural practice for years to come.

For the weavers consistently caught in the middle of different economies of corruption, between opposing forces each attempting to dominate political and social realities, enriching their weaving practice may have offered hopeful respite from the turmoil, and perhaps even a necessary form of resistance. In the 1980s, for instance, the Maoist communist movement Sendero Luminoso (Shining Path) ignited an armed struggle to break the shackles of colonial and capitalist oppression; the persistence of tapestry making and other crafts throughout these times is a testament to the resilience of creative communities during hardship.

These exquisite woven works plunge both weaver and viewer into a perceptual interior space. Some, especially the works of Eddie Sulca, appear as if they were doused in the raking light that filters through vertical blinds, rippling. Others resemble piano keys in their intricate layering of light and shadow. The loom becomes a machine for abstract thinking, a mechanism for strengthening spirituality, society, and history—and what remains are brilliant woven bodies flexing with sensitivity, receptivity, continuously strengthening toward the hypertrophy of art.

Travis Boyer is a New York–based artist and educator.