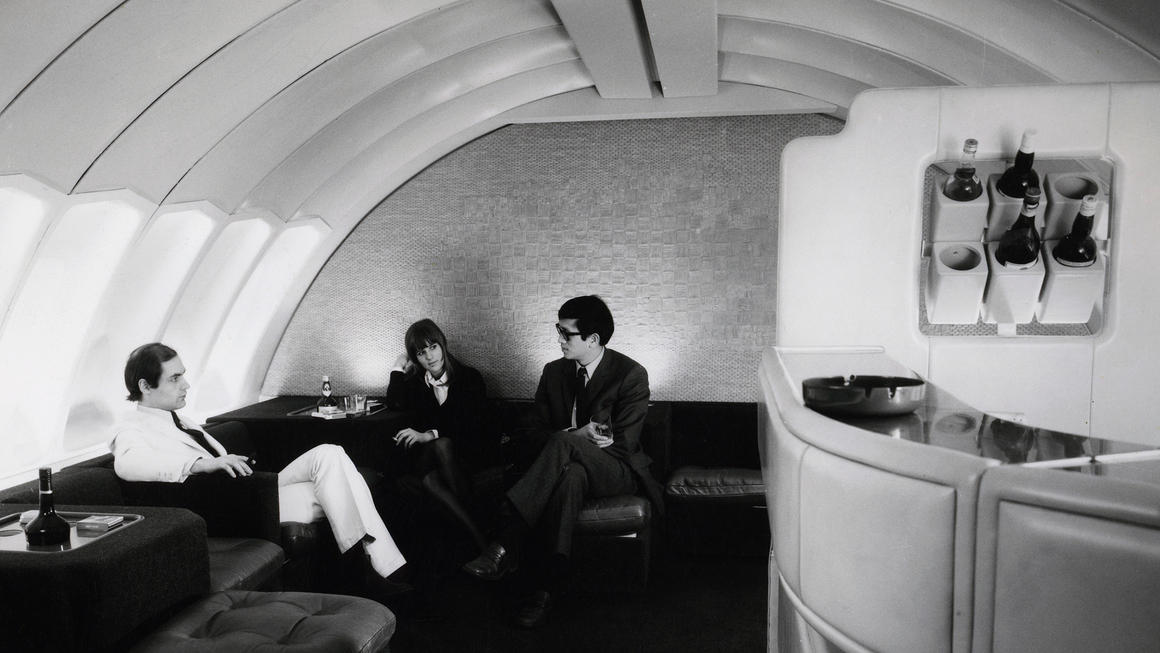 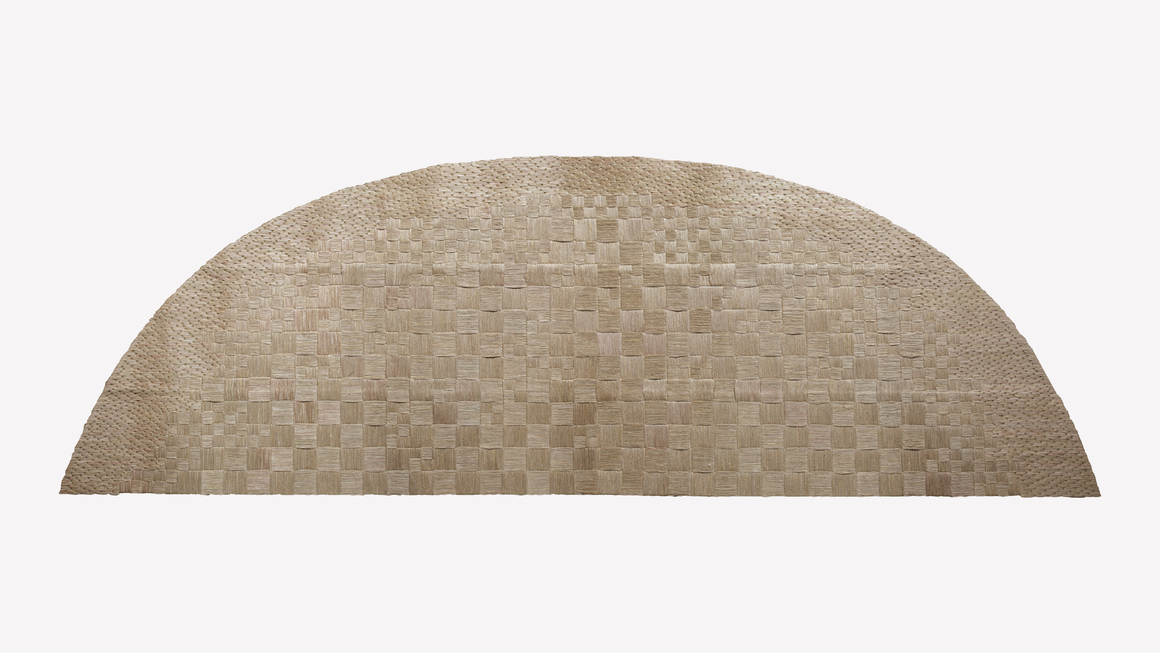 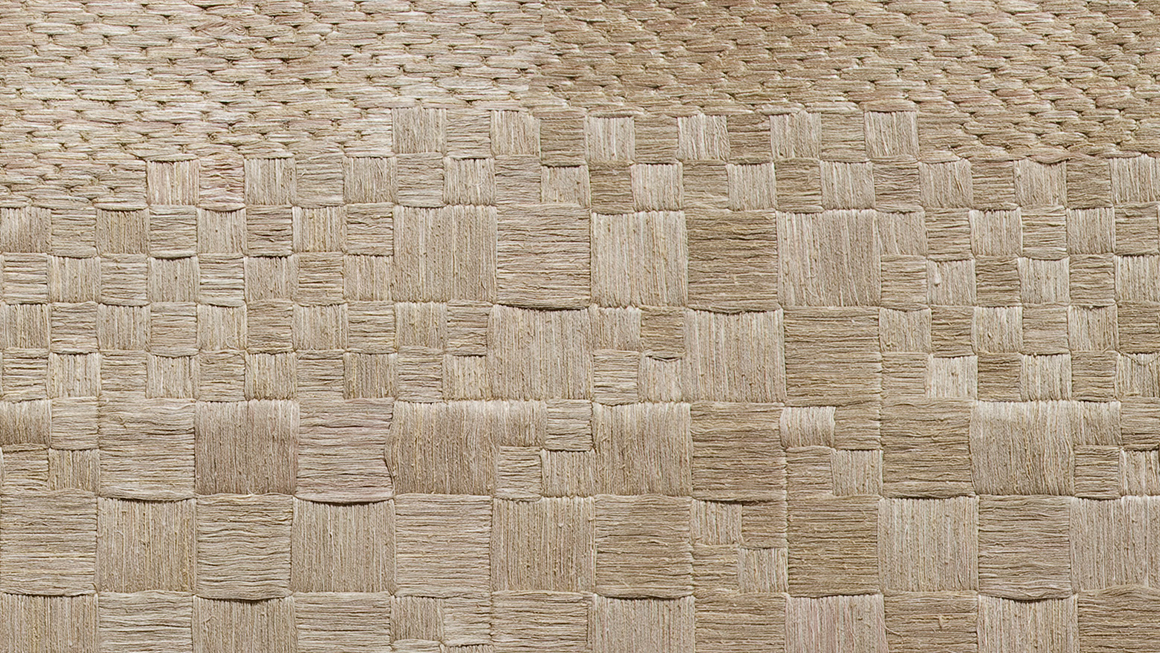 There were lots of reasons to fly Air France from New York to Paris in 1969. Buying your ticket from one of the offices designed for the airline by Charlotte Perriand. Buckling yourself into a seat inside a shiny new Boeing 747. Being greeted by a stewardess clad in a boxily chic uniform designed by Cristóbal Balenciaga. And, if you were lucky enough to be flying first class, you could down cocktails in the bar up in the “bubble” beside one of the petit point bas-reliefs specially made for Air France by the artist Sheila Hicks.

Hicks had stitched the work herself in her studio on Passage Dauphine near Place de l’Odéon in Paris, the city where she had lived since moving from the United States five years before. Over the next eight years, she would make another seventeen silk bas-reliefs for Air France’s 747 bubbles, each of which was designed and shaped to synchronize with the curving upper walls of the aircraft.

The Air France project was not the only commercial commission that Hicks undertook at the time. Shortly before leaving for Paris in 1964, she had designed textiles to be manufactured by Knoll in the United States, and did the same for Vorwerk in Germany after arriving in France. In the same year, she completed her first public commission for a large textile work to be hung in CBS’s newly built headquarters in New York. Similar projects followed for IBM’s offices in Paris, the Ford Foundation’s New York headquarters, the TWA terminal at John F. Kennedy Airport, and Air France’s jumbo jets.

Yet Hicks’s passion was the experimental work with textiles she had begun as an art student at Yale in the mid-1950s. One of her teachers, the German artist and Bauhaus alumnus Josef Albers, encouraged her interest in textiles rooted in her Nebraska childhood, when Hicks’s mother had taught her how to design and sew her own clothes and two great-aunts had introduced her to knitting and embroidery.

Hicks traveled across Latin America to research vernacular weaving techniques in Bolivia, Brazil, Chile, Colombia, Ecuador, Peru, and Venezuela. After completing her MFA at Yale in 1959, she continued her research in Mexico, reinterpreting her findings in her own textile pieces, which she exhibited there, as well as in the United States and Europe.

Now eighty-three and still living in Paris, Hicks has since experimented with every element of the weaving process. She has worked with a diverse range of materials, trying out local ones wherever she has been: wool and cotton in Mexico, linen and silks in France, as well as unorthodox threads, like wooden sticks, newsprint, the collars and socks discarded by the nuns in a Carmelite convent, and vintage shoelaces she found at the Paris flea markets. Her techniques have been equally eclectic, as she has tied, crushed, rolled, twisted, and looped threads into position, as well as weaving them. The result, as Jennifer Higgie described it in frieze magazine, is “at once textural and sculptural, sombre and wildly colourful.”

At first glance, the Air France bas-reliefs appear to be relatively restrained examples of Hicks’s work; they are made by a traditional technique and from a conventional material, one of the silks she discovered after moving to France, all roughly the same shade of creamily grayish white. Yet the delicate play of light on the threads, the subtle variations in their textures, and the sizing of her petit point grid make them as compelling to look at and to touch as Hicks’s most audacious experiments, inside or outside of Air France’s bubbles.

Alice Rawsthorn is a London-based writer on design. She is the author of Hello World: Where Design Meets Life, published by Hamish Hamilton. Her next book, Design as an Attitude, is to be published by JRP|Ringier in spring 2018.